The Ch’in Dynasty, which lasted for only 39 years, was China’s shortest-lived dynasty. (Compare that to the Shang’s 750 years, Chou’s 900 years, and Han’s 400+ years.) But China was named for this seemingly minor dynasty. Why?

The original question is a bit vague as to who exactly is calling China, well, "China." This also means that it's a bit tricky to pin down what exactly the word "China" refers to (e.g. is it the same word as "Cathay," "Sina," etc.? Is it even referring to a nation?), especially because it's not at all a certainty that "China" is derived from "Ch'in/Qin" (I'll refer to it by its Pinyin romanization "Qin" for the rest of this answer). It's also not exactly clear what "Qin" refers to as there are many political entities in China's history that shared that name. The first dynasty to unify China? The state that preceded the dynasty? One of quite a few states in later periods of disunity? So let's address each part of that.

Here's some more details on each one in turn. But first caveats galore.

With those in mind, let's dive in!

The Chinese actually refer to themselves as the Han most of the time. Why do westerners refer to China as such then? Well, it is more complicated than you might think. China is either a Persian or Sanskrit word for a kingdom in central Asia that might be the Qin dynasty, or might be something else. Marco Polo seems to be the one who brought this name back to Europe after traveling to both these places, but where he got it from exactly is a mystery.

The Ch’in dynasty united modern China and greatly advanced Chinese culture; that's why modern-day China is named for this short but great dynasty.

The remarkable Ch'in dynasty arose from the remains of the Chou dynasty in 255 B.C.

Although it lasted only 40 years, the Ch’ins united almost all of China and also finished constructing the Great Wall.

The Qin dynasty ruled in China from 221 BC to 206 BC. It was created by the warlord Qin Shi Huang during the Warring States Period and defeated several other states in the area to unite China. While the Qin ruled China for only a very short time, they built both the Terracotta Army and parts of the Great Wall of China. The second, and final emperor, Qin Er Shi, was overthrown by a popular rebellion after the first Qin emperor died. It was followed by the Han dynasty. The Han dynasty was founded by Liu Bang in 202 BC.

The Qin Dynasty is remarkable in unifying China for the first time, but this accomplishment alone is not enough to explain the name. Two reasons: one, Qin Dynasty is far from the most remarkable even to Chinese people, who might refer to themselves as 漢人 (Han people) or even 唐人 (Tang people), and never as "Qin people". Second, when it comes to names foreigners generally don't give a damn what your domestic accomplishments are, they just use the first name they hear that sticks. See for example the names of Germany or the American "Indians".

The real reason would be hard to prove, but I think there are two strong reasons why the name came from Qin:

One of the earliest contacts between the West and China might have been during the reign of the Greco-Bactrian king Euthydemus I, who ruled between 230–200 BC. During his reign the kingdom continued its eastward expansion, and may have come in contact with the contemporaneous Qin dynasty (221 to 206 BC). Thus the Qin may have given its name in a tremendous luck of timing.

Qin's position in the West

But even if contact existed, albeit unrecorded, long before this, it's also very likely that Western observers would have encountered the Qin state, which later conquered China and became the Qin dynasty. At the start of the Warring States period (~450 BC), Qin was already a major state in the far West, and became dominant via aggressive westward expansion and opening up lucrative westward trade (its capital Xianyang is basically in the same area as Chang'an, the famous Silk Road city). Anyone wishing to trade with China during this time would basically pass through Qin. 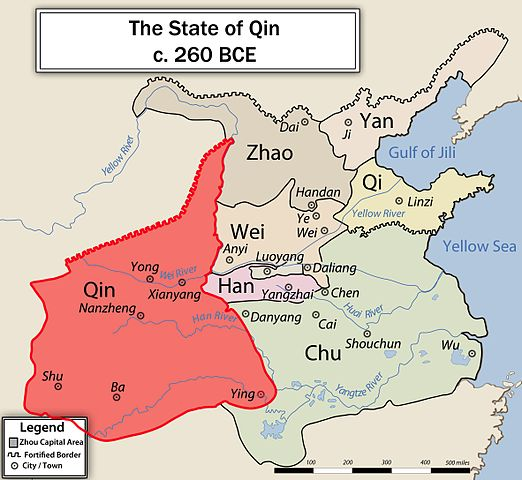 14
When was tofu invented? Was it specifically for vegetarian consumption from the beginning?
35
Why could China keep most of the lands it conquered after 17th century but European powers could not?
4
Why were the populous coastal areas of China not linguistically united?
13
In the 18th c., did/would China accept gold from Europe as trade payment? Why / why not?
4
Why did China begin persecuting Falun Gong after tolerating the movement for nearly a decade?
24
Why was the US so pro-China and so anti-Japan before WW2?