I recently came across this medal created to commemorate the preservation of George III from an assassination attempt in 1800: 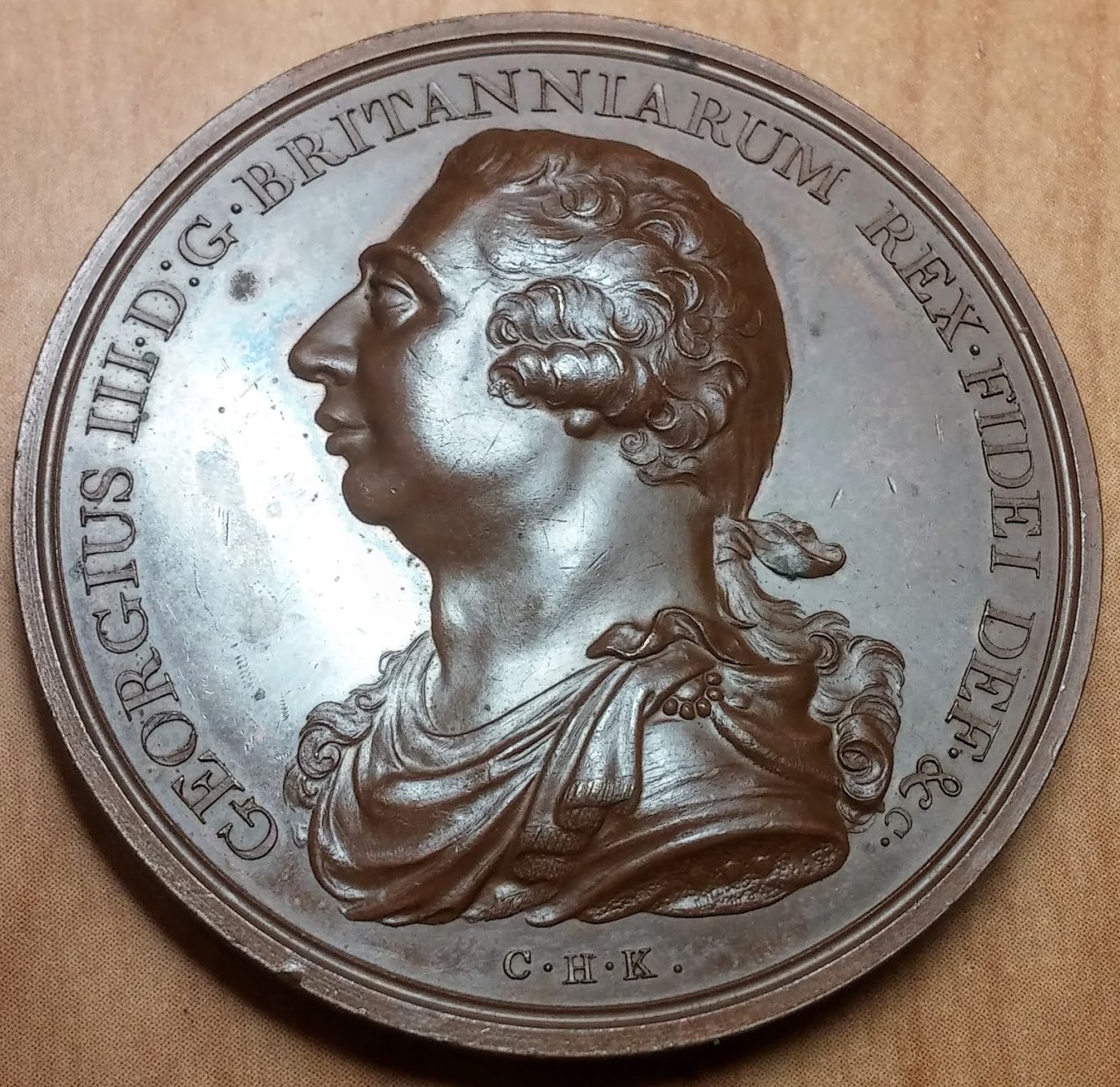 (the image was taken by me)

I understand most of the inscription but cannot figure out what the "& c·" at the end means.

The translation that I have come up with so far is:

As per Elizabethan Gleanings, by F. W. Maitland in The English Historical Review - Vol. 15, No. 57 (Jan., 1900), pp. 120-124, the suffix "and so forth" (or "&c" respectively) has been first used by Queen Elizabeth I to circumnavigate the difficult question of religious affiliation (emphasis mine):

If we look at the book to which we naturally turn when we would study the styles and titles of our English Kings, if we look at at Sir Thomas Hardy's Introduction to the Charter Rolls, we shall observe that the first sovereign who bears an "&c" is Queen Elizabeth. Now let us for a moment place ourselves in the first days of her reign. Shall we not be eager to know what this new queen will call herself, for will not her style be a presage of her policy? No doubt she is by the Grace of God of England, France and Ireland Queen. No doubt she is Defender of the Faith, though we cannot be sure what faith she will defend. But is that all ? Is she or is she not Supreme Head upon earth of the Church of England and Ireland ?

The full difficulty of the question which this young lady had to face as soon as she was safely queen may not be justly appreciated by our modern minds.

"Styles" here refers to the "manner of address". Note that the above is speculation by the author of the essay, not necessarily fact.

"European monarchs, who sometimes have lengthy titles due to dynastic claims to territories accumulated over the centuries (and also as a matter of prestige), often shorten their full titles by concluding it with "et cetera"

The claim is not referenced (unless you count it as a reference that Yul Brynner in a movie based his usage of the phrase on a novel that features the king of Siam, which as a reference is absurd on a number of levels).

Not the answer you're looking for? Browse other questions tagged britain latin-language latin coins or ask your own question.

5
What does a slitterman do?
6
Why does the Star of David feature on these African coins from 20th century?
3
What does this symbol in the title page illustration of the “Margarita Philosophica” mean?
13
What did the Romans call black people (sub-Saharan)?
2
What was the motivation behind prohibiting hunting in King's forests?
31
Why does Romanian culture have Latin influences?
3
What were British voting qualifications in the 1770's?
10
What was the “Brakteaten” medieval monetary system?
4
What does the abbreviation “adhib.” mean in historiography or archival science?
25
What date does a 1738 British author intend by “soon after the revolution”?