Why didn't the English overrun France when the king was their captive?

John II was captured after the Battle of Poitiers in 1356 and taken to Britain. Why did they wait and ransom him only to fight the French again? The ransom was 4 million pounds, but that could be recovered, through pillage of Paris.

One reason could be, there was a feudal system, and each feudal lord kept his own forces. But then, they could have at least seized the central territories, around Paris, with little resistance; and rest of France with a lesser resistance as the feudal lords did not have a central figure to rally around. The English already held Aquitane and Gascony, and could further logistically support campaigns. 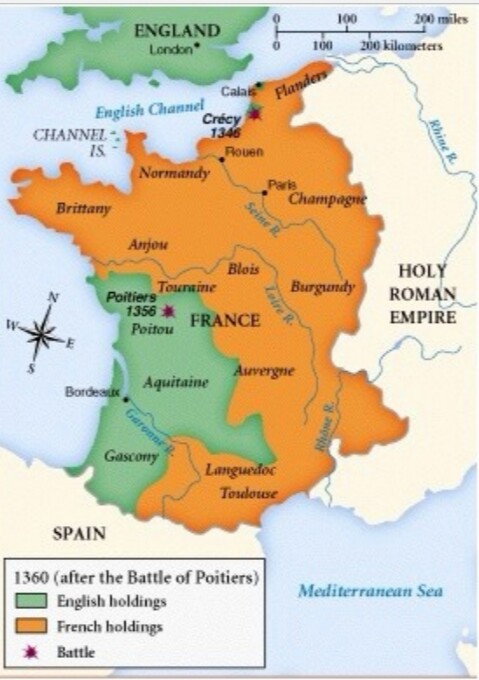 Capitalising on the discontent in France after the peasant revolt, Edward assembled his army at Calais in the late summer of 1359. His first objective was to take the city of Rheims. However, the citizens of Reims built and reinforced the city's defences before Edward and his army arrived. Edward besieged Rheims for five weeks but the new fortifications held out. He lifted the siege and moved his army on to Paris in the Spring of 1360. The suburbs of Paris were sacked but the city held out.

In 1362 John's son, Louis of Anjou, a hostage in English-held Calais, escaped his parole and refused to return. When John found out, ashamed at the actions of his son he felt duty-bound to return to captivity. He left Paris and gave himself up to the Captain of Calais, who returned him to his honourable captivity in England. He spent the rest of his reign there and died in London on 8 April 1364. John's funeral, in England, was a great chivalrous affair and he was honoured as a great man by the Plantagenets.

The parallel hostility and upholding deals is counter-intuitive. If Edward III intended to continue his conquests, would it not have made sense to not have signed the Second Treaty of London letting John II go in 1359.?

One needs to remember that France had a multiple of England's population, and armed forces during the Hundred Years' War. Thus, the surprising thing is not that England failed, but that it came close to succeeding.

England did try to "overrun" France after the victory of Poitiers. But King John was a weak king, and the quality of French leadership actually improved after his capture. In 1358, the English landed an army at Calais, and marched inland to the city of Rheims, where the French kings had been crowned. (Years later, Joan of Arc planned a campaign aimed at this city.) The French adopted "Fabian" tactics to avoid a repeat of Poitiers, and Rheims had prepared itself for siege, which it successfully resisted. During the retreat, about 1000 Englishmen were killed in a freak thunderstorm. This discouraged the English; some took it as an omen.

The resulting Treaties of London drew a line between the minimum that the English would accept, and the maximum that the French would give. Historically, England had owned Aquitaine through the 1152 marriage of King Henry II to Eleanor of Aquitaine. Successive French incursions had shrunk "Aquitaine" to just "Gascony." England had all of Aquitaine restored to her, plus a bit more, all the way to the lower reaches of the Loire Valley, in exchange for renouncing claims on the middle Loire, Brittany, and Normandy. Also, greater "Aquitaine" would be owned "free and clear" by England, rather than a Duchy that at least nominally paid homage to France, while King Edward III renounced his claims to the French throne through his mother.

If you're wondering why the English didn't threaten or torture King John until he signed away his country, you're thinking in twentieth century "total war" terms e.g. what would the Allies have done if they had captured Hitler. War in the Middle Ages (of Chivalry) was a lot more "gentlemanly." The English made one more attempt to overrun France, lost, and "settled" for what they could get, which was basically a "cease-fire in place." Which was the customary result for its time. Not e.g. the "unconditional surrender" of the Axis powers (or of France). Even Hitler himself let France (nominally) keep half the country (Vichy France) until 1942.

To give you an example of the chivalry of the time, King John was released in 1360, after leaving two of his sons as hostages. When one of them escaped in 1362, John himself volunteered to go back into English captivity to redress the balance. That would not have been done in "your" world.

Not the answer you're looking for? Browse other questions tagged france england hundred-years-war or ask your own question.

7
What English king died from water intoxication?
4
When was King Alfred first called 'Alfred the Great'?
14
What was the attitude of English knights towards their longbowmen counterparts?
8
Jean III de Grailly, captal de Buch's strange title
16
What was the reaction to English monarchs using the title "King of France"?
16
Who was the last English king whose first language was French?
17
When was France fully liberated?
9
Which Kings of France visited England?
16
Why did the negotiations between Henry V of England and France fail?