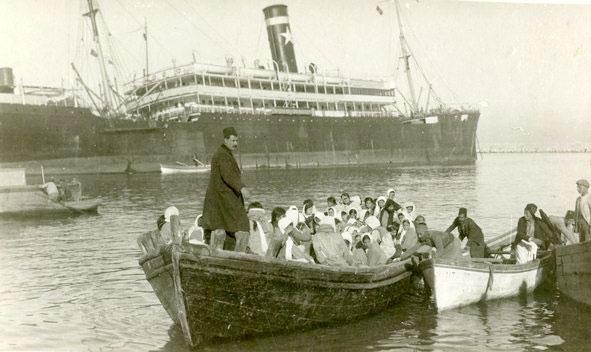 I could not find any direct information on the ship, but did find another image of what appears to be the same ship, present on another web page describing operations of the Near East Foundation group in 1922, this time at the fire at Smyrna. 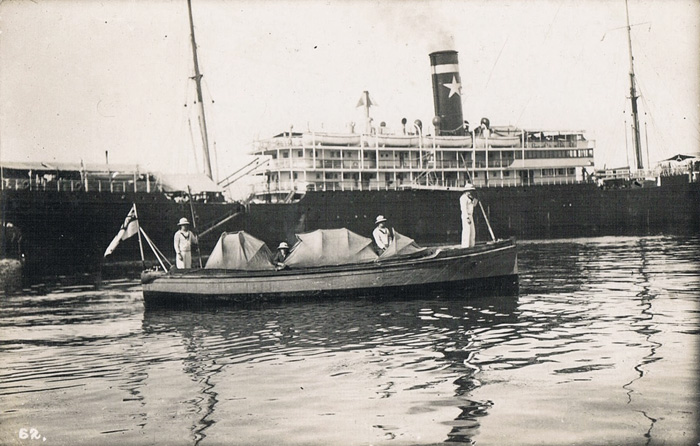 After linking the ship to the Near East Relief efforts, reading some of the early accounts of the events of the time led to this passage from The Interior, Volume 53, dated November 30 1922:

One such message from Athens reads as follows The evacuation of all Asia Minor orphans is necessary All Greek children are already enroute The Armenians are following immediately The steamship Belgravian chartered by Near East Relief is evacuating from Samsoun direct to Greece Steamship Marta is proceeding with Syrian and Nestorian refugees from Constantinople to Mosul via Alexandretta Marta will then proceed to Mersine to evacuate 3,000 orphans from that port to Beirut We are establishing a skeleton organization in Greece to make arrangements the orphans The steamship Marie Louise is evacuating the remainder of the Kouleli boys also Constantinople orphans located on the Asiatic side or in requisitioned buildings...

So I believe the ship in question may have been the Marta, according to the records concerning the relief operations at the time. Unfortunately I haven't any more info on the Marta, yet.

Not the answer you're looking for? Browse other questions tagged 20th-century transportation or ask your own question.

10
Could you help me identify this photograph that was taken shortly after World War 2?
5
Where can I find more information about this use of Yakuza against a demonstration in 1960?
7
Identifying a ship in Sydney Harbour
2
In this scene what are the names of the kind of workers and the object they are propeling?
8
From what time can this jewelry date?
1
Can anyone verify this story about the President's driver?
3
Why was Stalin chosen as the First General Secretary in 1922?
11
When did the last (non-tourist) commercial stagecoach line run in the USA?