What goods were traded in the medieval Indian Ocean?

The Periplus of the Erythrian Sea has detailed reports of trade ports of the Eastern Indian Ocean in the first century AD. There are also plenty of archaeological reports, summaries, and books from that period in English.

Similarly, there is profuse evidence (in English) for trade after Vasco de Gama. However, for the Middle Ages, there are some first hand details from Marco Polo and Ibn Battuta, and not much else.

What trade goods were commonly traded in the Eastern Indian Ocean, between the Swahili coast, the Middle East, and India? Where were the sources of supply, and where was the demand for these goods?

There were many goods traded across routes with the domestication of the camel including silk, porcelain, spices, slaves, incense, and ivory. Here's a picture that I think you might find really useful: 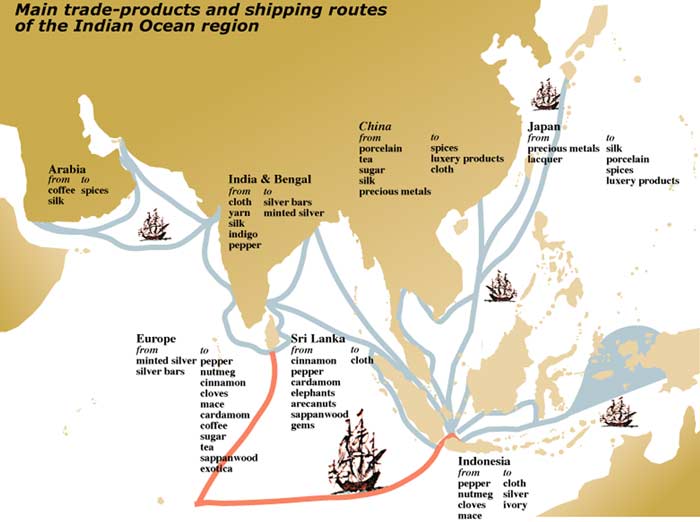 The biggest "thing" (in my opinion) that was traded was actually religious thought. Hinduism, Buddhism, and Jainism were spread through not just missionaries, but by traders too. Later on, Islam spread the same way.

Source for Map: http://maritimeasia.ws/maritimelanka/images/maps/productroutes_700x522.jpg Note: This map and information is about 3 BCE and onward (during medieval periods).

Not the answer you're looking for? Browse other questions tagged middle-ages india middle-east africa or ask your own question.

5
What was normal attire for Hindu kings in the 15th century?
17
What is the origin of Indian weekday names?
5
Could medieval European merchants travel through the Islamic world?
10
What were the key differences between United States' and Indian revolutions?
19
Did the US and Soviet navies really come close to blows in the Indian Ocean in 1971?
5
What were the major strategies/ideas Britain exerted against Indian Independence movement?
24
What were birthdays like in Medieval times?
4
Identify two Medieval Indian coins
6
How did medieval serfs obtain their iron goods?