Which was the last major war in which horse mounted cavalry actually participated in active fighting?

Which was the last major war in which horses were used for frequent fighting?

Why were these horses used, and about how many were there?

This is not a duplicate of the question (When was the last cavalry charge?) ; I simply would like more information about this somewhat muddled topic.

One thing that is important to consider is the difference between cavalry and dragoons - cavalry fight on horseback, whereas dragoons are infantry who use horses to get around and then fight on foot like other infantry. It's worth noting that both the Chinese and Indian armies still employ dragoon-like units today, who may well be used in low-intensity conflicts.

Of course, not only does the question need a definition of cavalry but also of major war - the Afghan civil war certainly seemed to include mounted troops.

Taking only traditional cavalry and really major wars however, the answer would be World War II where the US, Soviet and Polish armies all employed cavalry, with varying degrees of success.

So depending on exactly how you define the question, the answer could well be 75 years ago, or still ongoing and the last fight hasn't happened yet!

The Russians' retention of large units of cavalry long after this ancient arm had been abandoned by other major armies gave the planners and the Red Army greater flexibility in operations over difficult terrain, and particularly in severe weather. Horses could operate in mud, marshland, and in any sort of broken ground; they could filter through forests and negotiate watercourses and ravines that would halt motorized units.

The horses could survive at 22 degrees below zero ad keep moving in dust and sand that clogged and wore out engines. Cavalrymen could fight as infantry after covering immense distances, and, like the motorized infantry, they could exploit breakthroughs punched by tanks.

In attack and defense their capability for concealment and rapid dispersal could catch an enemy off guard or force him to move with caution. When operating over broad fronts, the abler Soviet commanders advanced their tanks and infantry over main roads and used the cavalry to cover the higher and more difficult terrain in between.

The Red Army's planners provided for expanding this arm, and by 1942 they were working towards 400,000 mounted cavalrymen organized into nearly 60 divisions.

My answer is the second world war as well, but in addition to the European front calvary was used by the US in the far east. The US 26th Calvary Regiment actively engaged (charged) the Japanese during the first battle for the Philippines. This charge was taught to us in school as the last cavalry charge (I am thinking the last US cavalry charge, but I could be wrong.)

Lieutenant-Colonel Edwin Ramsey: Soldier who led the last cavalry charge by the US army

As the Japanese Imperial Army landed thousands of soldiers near Manila Bay in January 1942, the 26th Cavalry was ordered into the fray to delay the enemy's advance. Ramsey, then a lieutenant, led 27 riders to the strategic coastal village of Morong.

The village was still as Ramsey entered, but a Japanese advance guard soon shattered the silence with guns blazing. When Ramsey spied hundreds more Japanese troops wading across a river toward him, he knew his men had only one hope for survival. He raised his pistol and, like a long line of cavalrymen since Custer's time, hollered, "Charge!"

WWII cavalry officer in the Philippines

Update: while researching this i found this interesting article that details several cavalry operations that happened in the later stages of WWII in Europe, including a story I had never heard about of a US cavalry detachment of the 10th Mountain where they engaged the Germans in Italy in April of 1945.

The Last Cavalry Charge in History? 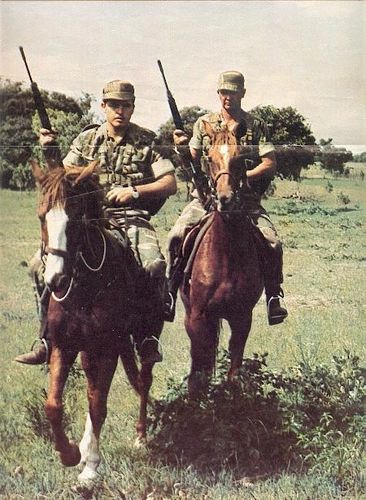 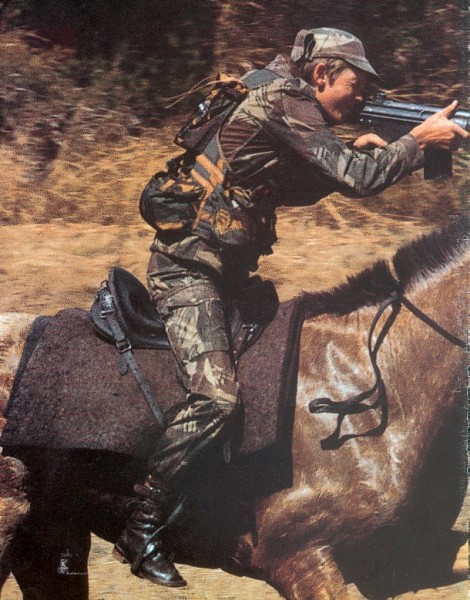 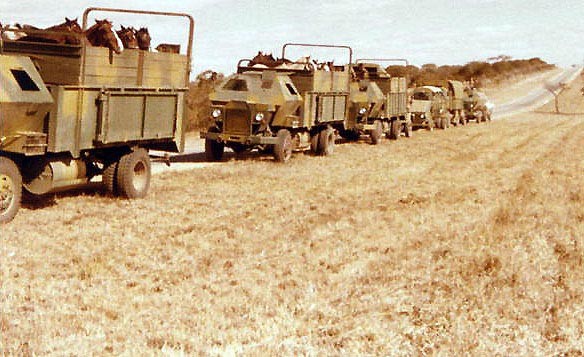 This is a partial answer as I don't have full evidence to support it, but I suspect that the Chinese may have employed mounted infantry in wartime as late as the 1970s.

From page 15 of China's War Against Vietnam, 1979: A Military Analysis:

Advancing rapidly at the outset, the Chinese forces soon met with difficulties. The rugged terrain of the mountainous border area was substantially unfavorable to the movement of division-sized forces, trucks, and other motor vehicles. The Chinese, lacking modern logistics equipment and being refrained from using air transportation, were forced to rely on old trucks, horses, donkeys, and laborers for logistics.

I will claim that it's plausible the Chinese used mounted infantry in combat during this conflict, simply because it's a matter of record that they had the units available in their armed forces for use (with soldiers were trained to fire weapons from the saddle, not just use them for mobility in the fashion of dragoons), the difficult terrain could've made their use advantageous for the same reasons as in say Afghanistan, and as donkeys and horses were already being used as beasts of burden for logistics purposes, they obviously had the "meta-logistics" required to feed and care for animals set up for the war.

If I can find any solid references to support the claim, I will append this answer; it's a bit difficult as while there were nearly 60,000 soldiers KIA during about a month of fighting, which certainly fits my definition of a "major war", it's a bit of a "forgotten conflict" and there don't seem to be a huge number of primary sources to draw from (in the English language, at least.)

It would appear that the Chinese used mounted cavalry in the Korean conflict in 1952.

In Burke Davis's Marine!: The Life of Chesty Puller, the author quotes Puller, describing action near the 38th Parallel:

"Puller witnessed some bad moments for the First Cavalry while he was on the line: 'One night they were overrun by Chinese horse cavalry. They had dug in tanks to use as guns, and after dark the Chinese came in, galloping fast, and overran them. The First Cavalry broke, and the Chinese sabered them, hundreds of them, from horseback.'"

This book does not include explicit citations, but this appears to be a direct quote from Gen. Puller describing his experience in Korea.

17
When was the last cavalry charge?

17
When was the last cavalry charge?
25
What was the first battle in history fought by vast-majority-% "distance-shooting" non-mechanized force?
18
Was the Napoleonic era cavalry armour effective against firearms?
1
Did it make sense to bring along infantry to reinforce attacking cavalry before the introduction of firearms?
28
When was the last time a reigning monarch personally participated in battle?
31
Given their reputation for fighting to the last man in the Pacific, why did 700,000 Japanese troops surrender in Manchuria?
16
Why was the last battle of the War of 1812 fought fully half a year after the official end of the war?
13
When was the tactic of chaining ships together last used in a major naval battle?