Has the Scythe ever been used as a weapon?

In Victor Hugo's The Hunchback of Notre-Dame, Clopin Trouillefou uses a scythe to great effect:

One was noticed who had a large, glittering scythe, and who, for a long time, mowed the legs of the horses. He was frightful. He was singing a ditty, with a nasal intonation, he swung and drew back his scythe incessantly. At every blow he traced around him a great circle of severed limbs. He advanced thus into the very thickest of the cavalry, with the tranquil slowness, the lolling of the head and the regular breathing of a harvester attacking a field of wheat.

My question is, has a scythe ever been used in such a fashion historically? I aware that war scythes have their blades mounted parallel with the shaft, and this is not what I am looking for. Has a scythe in its "traditional" arrangement been used in warfare?

Edit: I am looking specifically for examples from the middle ages or later.

The Kama isn't quite what you ask for, since it is much smaller then a scythe, but this peasant tool turned martial arts weapon is arranged as you indicated with the blade mounted at ninety degrees to the handle. 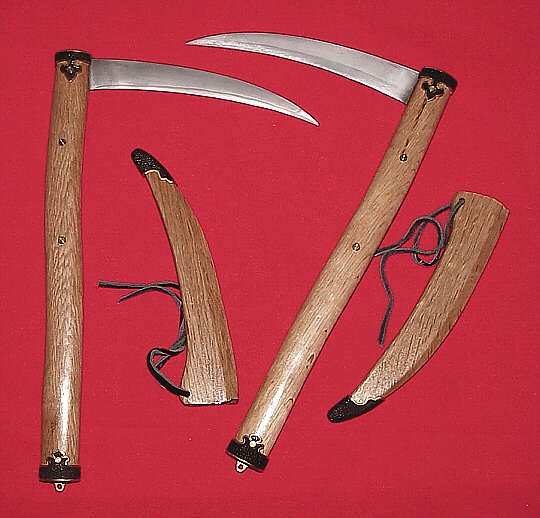 is a traditional Filipino and Japanese farming implement similar to a sickle used for reaping crops and also employed as a weapon.

Yes the Dacians used this type of weapon frequently and it is very similar to a scythe. This is from Wikipedia so take from that what you will, but I have read about it in Roman history books as well I just dont have them handy at this moment, but to quote wiki:

"The most important weapon of the Dacian arsenal was the falx. This dreaded weapon, similar to a large sickle, came in two variants: a shorter, one-handed falx called a sica,3 and a longer two-handed version. The shorter falx was called sica (sickle) in the Dacian language. The two-handed falx was a polearm. It consisted of a three-feet long wooden shaft with a long curved iron blade of nearly-equal length attached to the end. The blade was sharpened only on the inside, and was reputed to be devastatingly effective. However, it left its user vulnerable because, using a two-handed weapon, the warrior could not also make use of a shield. Alternatively, it might be used as a hook, pulling away shields and cutting at vulnerable limbs."

Edit: After the OP added the condition of middle ages or later, I did find one source of the English Peasants Revolt of 1381 where the farmers/peasants armed themselves with axes, clubs, scythes, etc... and engaged royal forces. So this is one case they definitely used a scythe as you described as a weapon.

"On May 30, Thomas Bampton and two serjeants-at-arms went to Brentwood to inquire into tax payments and to collect any money due. Thomas Baker, the spokesman for Fobbing, informed him that they had already paid and had a receipt from Bampton. They would not pay again. Bampton became angry and threatened the men of Fobbing, but they had gathered with the men from Corringham and Stanford: no one would pay. Bampton's men tried to arrest the 100 men, but a mob drove -the three out of Bampton and back to London to report the incident. There were simultaneous uprisings on both sides of the names as peasants raised their scythes, axes, and knives in this "battle worth fighting...Between May 31 and June 1, the men of Essex gathered at Brentwood, Baddow, and Colchester. By this time the news reached the king, the revolt was under way."

Also found was the German Peasants Revolt of 1525

"While there were exceptions, the majority of conflicts were fought with scythes, axes, flails, and other farming tools. The League was also at an advantage by having armed horsemen, who could cover long distances much faster than a marching peasant army. Altogether about 100,000 peasants and sympathizers either died in combat or were later executed during the Peasant War of 1524–5. Many survivors were tortured and lost their privileges and property. Cities and villages that aided the revolts lost their rights; their weapons were confiscated"

Just to add to the accepted answers above, fencing master Paulus Hector Mair (16th Century) produced a treatise Opus Amplissimum de Arte Athletica on a wide range of improvised or unusual weapons, including the Scythe.

TL;DR: The Hussites were famous for using flails and sang during battle, and so a possilbe inspiration for Hugo. This is not really relevant to your question about scythes, but may shed some light on how this passage you quote came about:

One was noticed who had a large, glittering scythe, and who, for a long time, mowed the legs of the horses. He was frightful. He was singing a ditty, with a nasal intonation, he swung and drew back his scythe incessantly.

The Hussites, a religios and movement that faught the Hussite wars, where known for thisbattle tactic: They fired with cannon and crossbows from the cover of carts until the enemy was in diasarray, then hussite infantry with pikes and flais would attack. It was alleged that they would sing church dittys while bashing knights with their flails. The hussites founded their own tradition of religos singing. That the Hussites sung while fighting may be hyperbole, but according to German wikipedia at one battle their enemy ran away because of the intimidating songs - or so one story goes.

So maybe Hugo heard of the Hussites and their battle songs, decied it to be a cool detail for his story and exchanged one farming implement for another, taking some artistic license.

There were scythe swords. They were a scythe blade attached to a sword hilt. Here's a picture of one.

2
Has ramming ever been considered a viable tanking tactic?
11
Has there been an occasion where ranged weapons were available but not used?
8
Why has the khopesh never been used since ancient Egypt?
22
Has a battering ram been used to breach a gate?
6
How long ago was the yo-yo first used as a weapon?
0
In the Middle Ages - 18th century, how long would it take for a blacksmith forge a regular farming scythe to a war scythe?
5
Was the tide of war ever turned by a wonder weapon?