What are the dimensions of this pomerium marker?

The pomerium of Vespasian from 75AD (pictured below) was moved to Santa Cecilia in Trastevere, Rome in the 20th century. What are its dimensions, and what is its height, measuring from street level to the top of the top slab which begins with the etching "IMP CAESAR"? 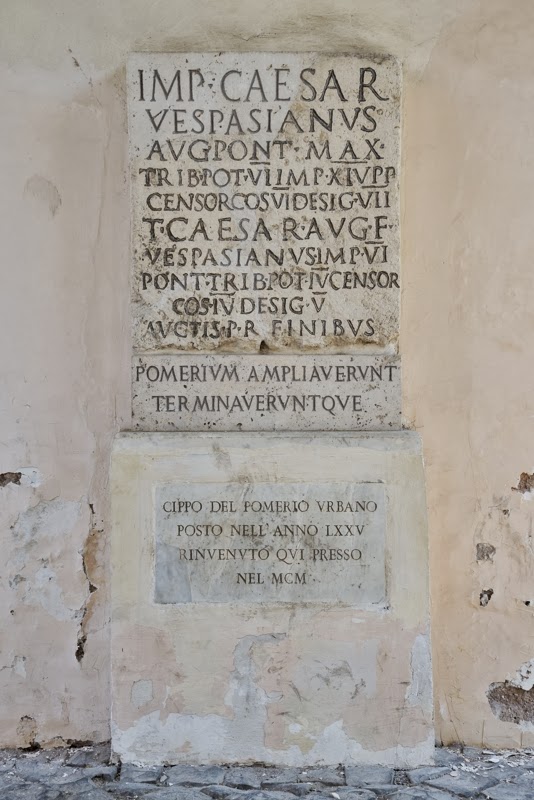 I found a translation for the text here:

I've searched many websites and can't find this information. Here are some of the websites I've looked at:

This is not "the" or "a" pomerium, merely a stone marking it (Material: stone — cippus, part of pomerium) and it is found at Epigraphische Text-Datenbank: Detailansicht

And the Epigraphic Database Roma gives you the following measurements:

This is from an Italian website that takes some liberties when switching to English language. But the measurements are the same on both – and metric.
The abbreviation litt. stands for litterae (letters) and alt. for alterum (the others).

Not the answer you're looking for? Browse other questions tagged ancient-history ancient-rome roman-empire archaeology epigraphy or ask your own question.

3
What did Ostian script look like?
4
What are the symbols on the Tomb of the Priestess of Isis along Via Appia
11
What sources could Tacitus or Appian have used that have since been lost?
6
What language is the inscription in Masaccio's Holy Trinity
6
What is the oldest inscription of Yahweh found?
9
What are the ruins in Turkey near Kömürcü Köyü?
6
Are there any hypotheses on how the Dorset people disappeared?