What universities existed in Dutch East Indies, and how available were they to the native population?

In the introduction of his translation to the historical novel Footsteps, the translator Max Lane (who is also described as a researcher on Indonesia) said that in the beginning of the novel, the book's hero:

... arrived to study at the only school of higher learning in the Indies for Natives, the medical school for native doctors

I figured this medical school is the STOVIA, Dutch acronym for "school for the training of native physicians". I wonder about the statement on its being the only school of higher learning for Dutch East Indian (Indonesian) natives.

How many universities (or equivalent) existed in the Dutch East Indies at the time of the novel (1901)? How available were they for the natives? And for extra context, I'd also appreciate if the answer covers where the racial/ethnic discrimination come from, was it from the Dutch government policy, or was it the private policies of private universities? In general how does the quality/quantity of these universities compare to those in the Netherlands itself?

In 1901, there were two higher education institutes but neither was, at the time, truly comparable to Dutch universities. The first genuine university-level education was not available until 1920, the shortage of trained professionals having become apparent during WWI.

Prior to 1800, the education system was in the hands of the Dutch East Indies Company (VOC). There was no higher education, only schools which

were small, locally based, and mostly religiously oriented. The company distrusted the effects of education on its indigenous subjects and gave schools little encouragement

Things improved when the Dutch government took over but it was only in 1860 that secondary schools (HBS) and in 1867 that European Lower Schools (ELS) were set up. These followed the Dutch curriculum and enabled graduates to attend universities in the Netherlands. Although aimed at Dutch residents’ children, in 1891 the ELS allowed Indonesians and 1,870 had enrolled by 1900. However, only those from upper class, wealthy backgrounds could attend. Whether they were segregated or not is unclear but it seems likely as (referring to the new First Schools set up for Indonesians in 1907 to relieve the pressure on the ELS)

Dutch teachers now appeared in these schools (mostly women, since their male colleagues were reluctant to teach ‘natives’).

Source: M.C. Ricklefs – A History of Modern Indonesia since c.1200

...the three old hoofdenscholen (chiefs’ schools) at Bandung, Magelang and Prabalingga were reorganised to become schools clearly designed for the production of civil servants, and were renamed OSVIA (Opleidingscholen voor inlandsche ambtenaren, Training schools for native officials). The course was now five years long, in Dutch, and open to any Indonesian who had finished the European lower school. It was no longer necessary for an entrant to be from the aristocratic elite.... In 1900–2 the ‘Dokter-Jawa’ school at Weltevreden was turned into STOVIA (School tot opleiding van inlandsche artsen, School for training native doctors). Its course was also taught in Dutch.

Further reforms followed, but not before Hoesein Djajadiningrat (from a wealthy family) became the first Indonesian to gain a doctorate in 1913 – but at Leiden University.

In 1914 the First Class schools were

... turned into Hollandsch - Inlandsche (Dutch-Native) schools (HIS). Although these remained schools for the Indonesian upper classes (there was still a minimum income requirement for parents), they were now formally a part of the European school system in Indonesia. The Hollandsch-Inlandsche schools, the Hollandsch- Chineesche (Dutch-Chinese) schools which were begun in 1908, and the European lower schools, although in principle ethnically distinct, now all led to the secondary levels of European education and thence to higher bureaucratic employment.

These reforms were opposed by some more conservative elements among the Dutch who felt that education would lead to increased nationalism, and also by Indonesians concerned about the Dutch cultural influence. 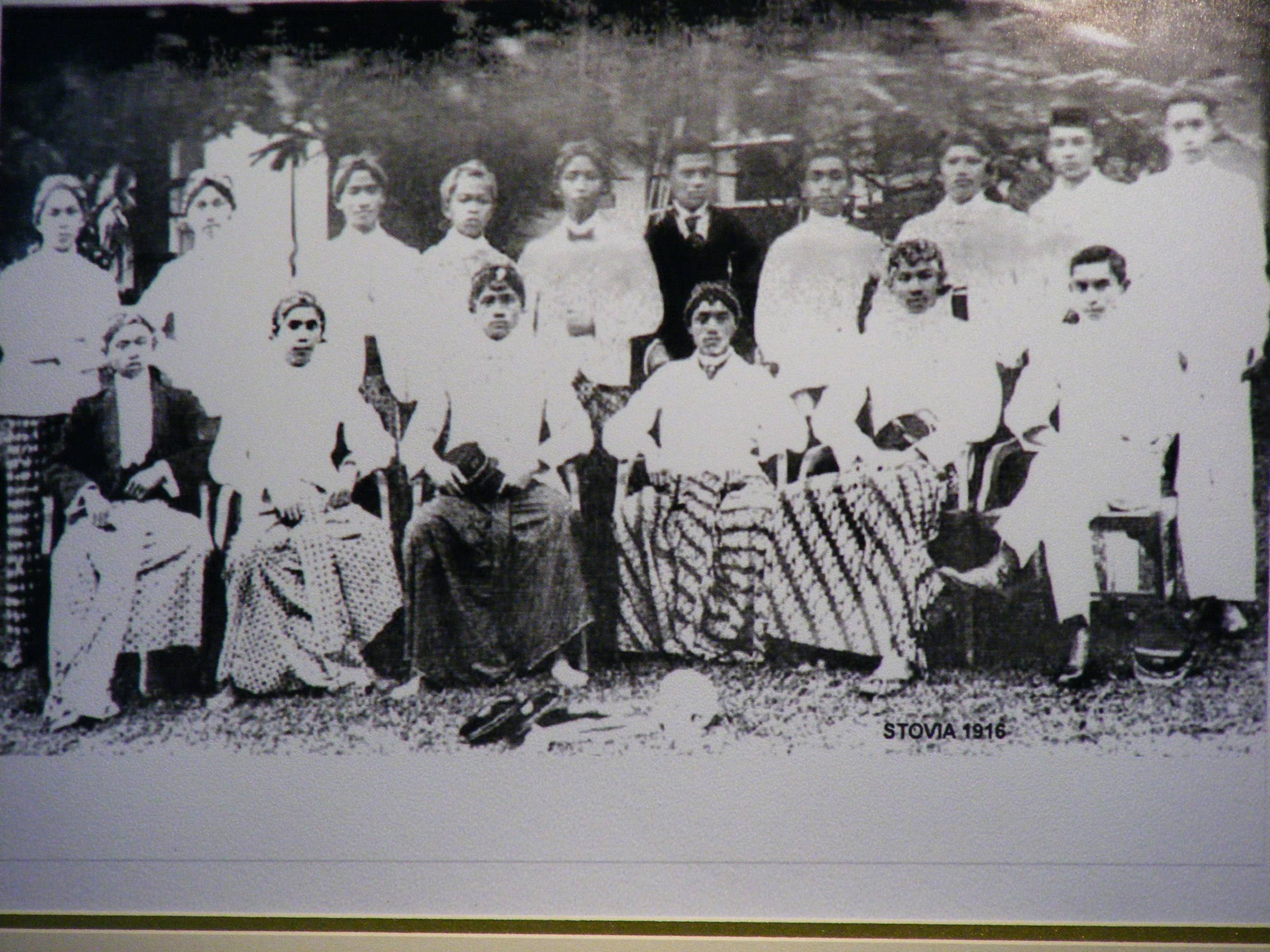 Stovia scholars of 1916 (from Dutch Wikipedia)

It was not until after WWI that the need for locally trained professionals was fully recognized. Thus, in 1920

...university-level education, without regard to ethnicity, at last became available in Indonesia with the opening of the Technische Hoogeschool (technical college) at Bandung. In 1924 a Rechtshoogeschool (law college) opened in Batavia, and in 1927 STOVIA was turned into the Geneeskundige Hoogeschool (medical college).

Progress in terms of the number of graduates was slow, though, for there were only 178 Indonesians at university level in 1930-31. Also, according to Chiara Logli in Higher education in Indonesia: Contemporary challenges in governance, access, and quality,

The student bodies reflected the colonial hierarchy, with the Dutch at the top and the indigenous people at the bottom.

When Indonesia became independent in 1949, the country inherited from the Dutch

a staggering illiteracy problem, an acute shortage of trained technical and professional personnel...a higher education system that had sought to imitate Dutch university instruction and that had in practice barred all but a handful of Indonesians.

Here is a list of over 200 universities in Indonesia. Of these, only the University of Indonesia (its modern name) was established before 1901, that is to say, around 1850. So the novel is accurate; there was only one university in Indonesia in 1901.

It was originally only a medical school with a three year program that allowed graduates to practice medicine, but only in (modern) Indonesia. So it was intended primarily for "natives." (The Dutch government was worried about the impact of malaria and other diseases.) Later, it became a seven year medical program that qualified people to practice medicine elsewhere in the world. By 1950. shortly after the end of Dutch rule, the university had expanded to include the faculties of Law and Letters.

The Bandung Institute of Technology was established in 1920, but only for "civil" engineering. Other institutes of higher education weren't established until after the Dutch left in 1945. The local "universities," such as they were, could be attended by local people because they had limited curricula to meet mainly local needs. Basically, an Indonesian would have to go to Europe to attend a true university program outside the above specialties.

Not the answer you're looking for? Browse other questions tagged 20th-century education indonesia dutch-empire or ask your own question.

41
What were the acceptance criteria in universities of medieval Europe?
6
What advanced educational opportunities were available to native Africans in the early 1890's?
13
How many firearms were owned by civilian population between 1836 and 1912 in USA?
25
What were the Allies' plans if they caught Hitler alive?
9
Did the Dutch carry out trials for collaboration with the Japanese in the Dutch East Indies?
10
How many Dutch lived in Indonesia during the colonial era vs native population?
10
How did the Dutch East India Company (VOC) have so much revenue when they only control small part of Indonesia?
2
Why did Indonesia use a separate currency for West Irian before 1973?