What is the flag in this 17th century painting? 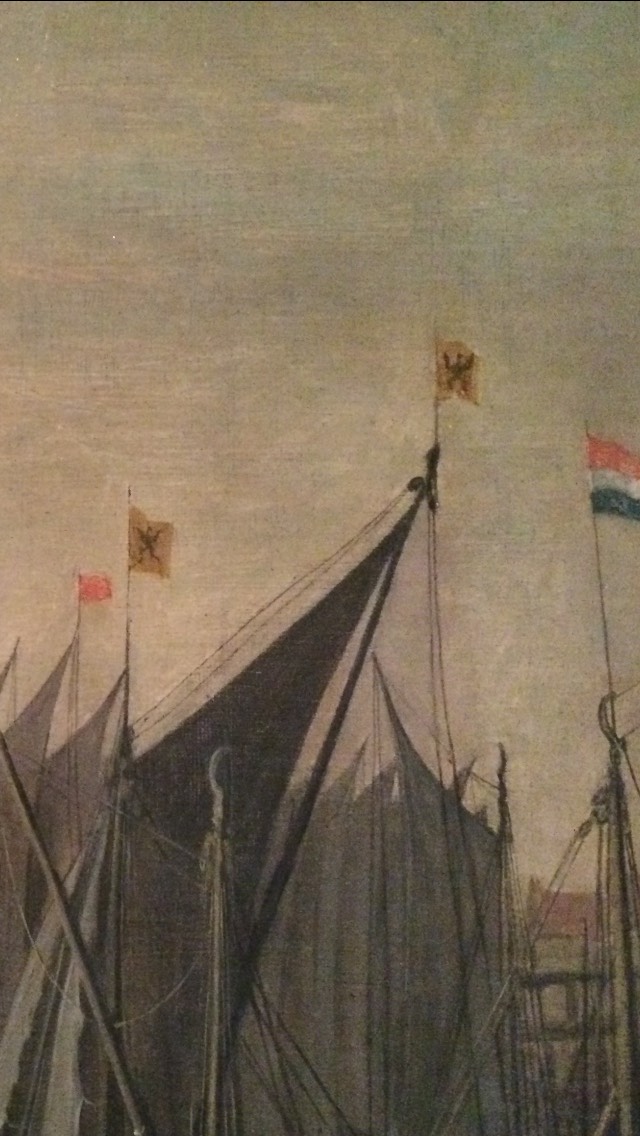 I'm doing research on a painting 'Koppertjesmaandag' by Adriaen van Nieulandt in 1633. In the right corner of the painting you can see a couple of ships with their flags. One in particular is a gold flag with a black eagle. This flag seems to be used a lot for the Holy Roman Empire, although usually double-headed. This particular flag is single headed.

Anyone here with knowledge on European flags? Thank you.

I would say it is the flag of Deventer. It's a city towards the east of the Netherlands, that prospered by trading with the various cities around the North and Baltic Sea coast as well as Scandinavia. It is situated at the river IJssel, which feeds in the Zuiderzee (back then, before Afsluitdijk changed it). The port of Amsterdam (depicted on the painting) also is connected directly to the Zuiderzee. Both cities being big trading cities, with easy access to each other, you can imagine many ships from either city visited the other.

Below is a picture of the facade of the Deventer City Hall, showing the single headed eagle on a golden shield, similar to the flag in the OP's question. 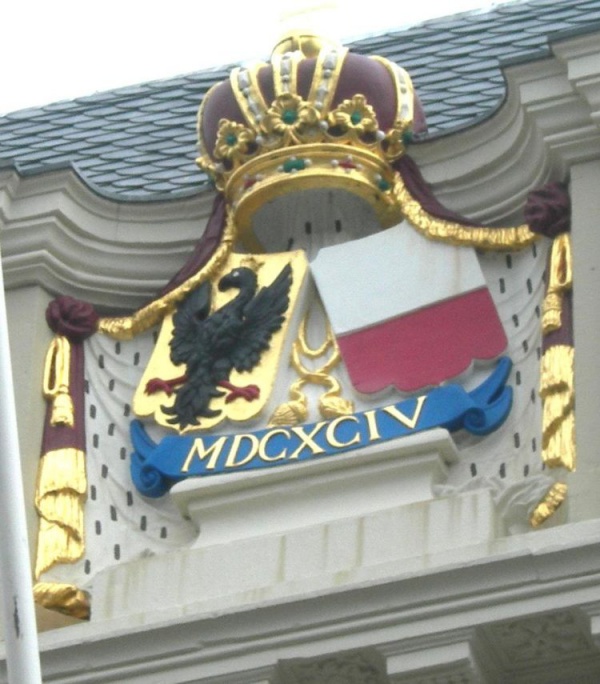 Deventer was part of the Hanseatic league, and part of the Holy Roman Empire in the Middle Ages. It was granted Free Imperial City rights before 1250, which explains the single headed eagle, as the emperor Frederick II adopted the double headed eagle around 1250 (according to the Chronica Majora by Matthew Paris ).

Source of the picture and additional renditions of the coat of arms.

I don't think it's an eagle. It looks more like a Gryphon. In that case, it could be from a number of Baltic states or areas, especially Pomerania.

But I'm pretty sure it's actually a lion, or more specifically, the Flemish Lion, indicating that the ships are from Flanders, which is the Dutch-speaking part of Belgium nowadays, or from the Netherlands in general: 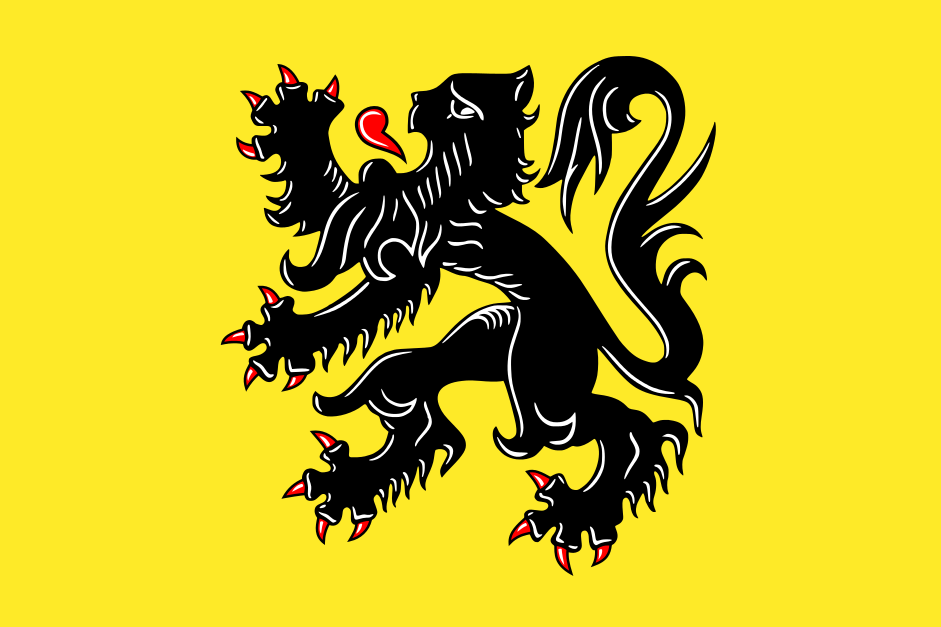 That looks a bit like the flag of Prussia. At the time, Prussia was a duchy vassal of Poland, and had been given as a standard an Eagle. There were a lot of Baltic port cities in Prussia, most notably Danzig (now Gdansk)

The only problem is that the eagle is facing the wrong way. Looking through their flags, it looks like there were a couple of iterations where the eagle was facing to the right instead of the left, but those were both in the 20th Century (and both known as "The Free State of Prussia").

So either this is close, but not it, or the artist was painting from memory and got the facing direction of his Prussian eagles wrong.

I found a site which might lead to the answer. Sadly I couldn't find the territory named Keizer (Emperor? Maybe is it a royal ensign for the Emperor himself?), the sixth from left, third from top: 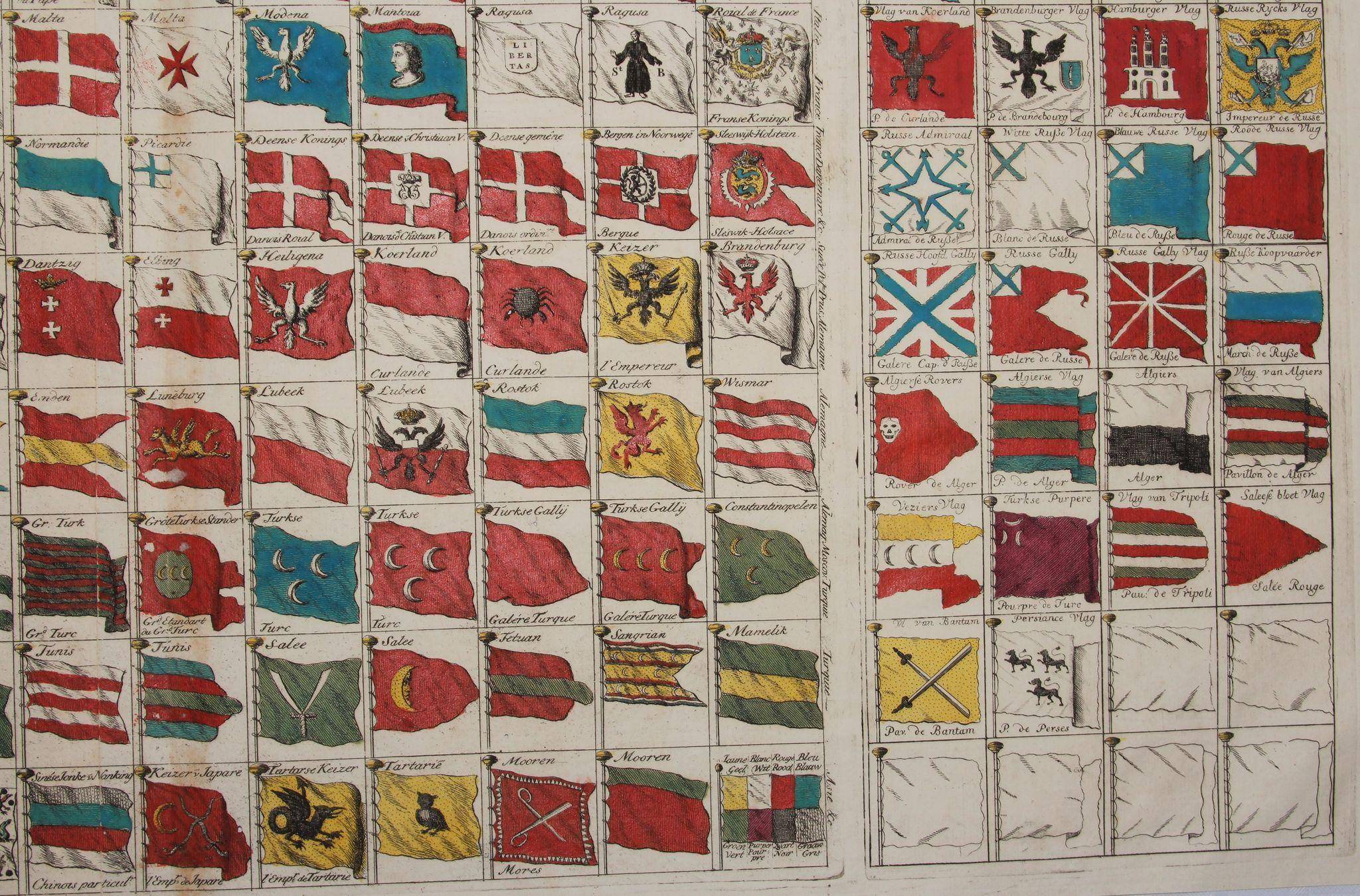 Very exact match by color and shape. check out this link for greater resolution: Very RARE 18th Century Table of all ship's flags in the world - Gerard van Keulen.

This looks like the coat of arms for the duchy of Holland. A red lion on a yellow background. This would make sense because Amsterdam, the city thats depicted in the painting, was one of the most important cities of Holland. 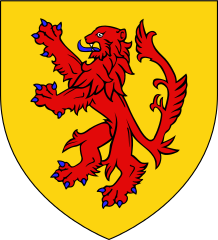 I note that the flag of Flanders in France & Belgium was yellow with a black lion on it but those look like eagles and not lions.

Most of the north German ports had red and white flags.

The Holy Roman Emperor and the Tsar of Russia had yellow flags with black 2 headed eagles. And some of their subjects might have flown such flags. Just as a stone slab with a carved 2 headed eagle was excavated from the site of the Hanseatic offices in London. The king of the Romans and future emperor used a yellow coat of arms with a single headed eagle but that ship in the painting is unlikely to have used his banner. A coat of arms yellow with a single headed eagle was sometimes also used for the kingdom of Germany and so some German ships MIGHT possibly might have flown a flag with that coat of arms.

You should look in 17th century flag charts for similar flags. In my experience flags with eagles were rare.

There was no law against a shipowner having a personal coat of arms and banner of yellow with a black eagle, so it could have been a private flag.

What type of ship flew the eagle flags and how far was it likely to travel? It looks like a small ship to me. Putting banner like flags on staffs at the end of diagonal booms is an unfamiliar practice to me. Are there specific occasions or types of ships that would be done on?

Here is a site for flag identification questions:

Added 04-02-2018 - I note that the eagle flag looks square, like a banner, while most of the other flags seem rectangular, like flags normally flown by ships, which may be a clue.

Not the answer you're looking for? Browse other questions tagged europe 17th-century identification flags netherlands or ask your own question.

6
Did any part of the Netherlands ever use this flag?
7
Which regions/dynasties do the flags in this Fresco about Byzantine-Persian war represent?
12
What flag has a blue-grey background and an orange-outlined green cross?
8
How do I interpret this 17th century English ledger?
12
What is this flag?
8
What does this Swiss banner/blazon/coat of arms/flag stand for?
11
What is this 17th century Swiss coin?
9
What is the painting within this 17th c. painting?