What are the historical first steps to imposing autocracy? Is there a pattern?

I keep hearing people say that "throughout history" the first thing every despot/tyrant/dictator does is silence the voices that oppose them, including discrediting any form of free press. Then today I saw the following: 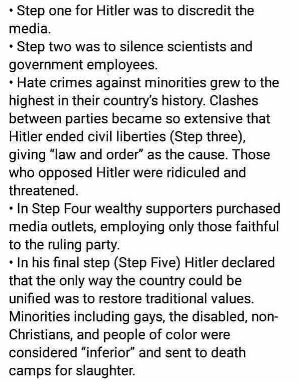 Besides the obvious question of the accuracy of the above list, this got me wondering in larger terms if there are any historical studies of the sequence of steps taken by various authoritarian leaders prior to imposing an an autocracy onto a society? Is there in fact a specific pattern?

I am not looking for a list of horror stories but rather a list of specific strategies employed as a means of rising to power.

The way this question is phrased it looks more like a request for a recipe to follow, like in the "steps to take". But this is of course very hard to generalise. Turning this on its feet again is the part of "is there a pattern?"

Ignoring the oxymoronic framing of time arising from the juxtaposition of "throughout history" and "free press", there seems to be a very simple pattern, identified as early as Plato and Aristotle wrote about ethics and politics.

Hence the road to power in Greek commercial cities was simple: to attack the aristocracy, defend the poor, and come to an understanding with the middle classes. Arrived at power, the dictator abolished debts, or confiscated large estates, taxed the rich to finance public works, or otherwise redistributed the overconcentrated wealth; and while attaching the masses to himself through such measures, he secured the support of the business community by promoting trade with state coinage and commercial treaties, and by raising the social prestige of the bourgeoisie. Forced to depend upon popularity instead of hereditary power, the dictatorships for the most part kept out of war, supported religion, maintained order, promoted morality, favored the higher status of women, encouraged the arts, and lavished revenues upon the beautification of their cities. And they did all these things, in many cases, while preserving the forms and procedures of popular government, so that even under despotism the people learned the ways of liberty.
(Referenceing Aristotle, Politics, 1310a by Will Durant: "The Life of Greece" Simon & Schuster: New York, 1939 pp. 122–123.")

The main pattern to observe is:

These are of very basic patterns, but they might be traced in Cromwell, Robespierre, Lenin, Mao or even in less negatively viewed characters like George Washington as well.

It is therefore distracting to just look at the oppressive things a tyrant does. If they are not directed at the direct enemies the future tyrant sees as obstacles in his path to power, they are negligible. Oppression measures develop slowly, over time, when the tyrant is already in power. Note that in the modern tyrant example case the ground work for oppression and censorship was handed over to his control just like the office itself. When the modern tyrant attempted a coup in 1923 by sheer force, it failed, quickly, because of the key missing ingredient: popular support.

Further reading:
Randall Collins: "Weber and the Sociology of Revolution" (2001)

13
What are the counterarguments to calling German nazism a right-wing movement?
6
What was the first supranational organization?
12
What are the safeguards in the German constitution of 1949 against dictatorship?
14
What are the historical reasons for religious and political negative attitudes towards homosexuality?
9
What evidence is there that English Political divisions from the 1600s are replicated in American politics today?
34
Is there a historical precedent to the vaccine scare?
7
Are there any historical accounts of Aisha (the wife of Muhammad) giving public speeches?
4
What was the first recorded non-violent toppling of a dictator?