Why did Charles I not borrow abroad?

The reign of Charles I of England can be summarized to a large degree as a continued attempt to raise revenue without authorization from Parliament. As is well known, Charles and his advisers had to resort to ever more vexatious expedients to do this and ultimately were not successful.

What puzzles me is that they apparently made little or no use of foreign loans. While repayment would not have been trivial, at least this way the English government would have had access to ready money, solving many of its problems.

So, why did Charles I not borrow abroad?

My guess is that the main European banking houses which could have provided such loans would have been aligned with (Catholic) Spain and so not able to help out (Protestant) England. On the other hand, Charles was on pretty good terms with Spain for most of his rule so I am not sure this is really the right explanation.

Charles I did borrow money from abroad but it was never enough to meet his needs. The financial drain of the Thirty Years War on much of Europe, a muddled foreign policy, and a lack of both collateral and trust were the main reasons Charles I could not borrow enough abroad. Potential lenders were also reluctant to help the king due to the English Parliament's control of London and the navy.

That Charles’ needs were so great was partly due to his own extravagance but also to debts which he inherited from his father, James I. It should also be noted that

England was still the least taxed country in Europe, with no official excise and no regular direct taxation.

Even so, the King’s financial situation at the start of his reign would have been alleviated to some extent had he had the trust of Parliament but

Buckingham’s disastrous attack on Cadiz seemed to confirm the worries many MPs had had about his suitability as a leader. The king still required money, loans secured on the crown jewels had funded the war, but nothing costs more than a defeat

Charles offset some of this through various domestic measures - for example, taxation by means of ship money from 1634 onwards - but none of his measures endeared him to his people.

In the early years of his reign (at least), Charles' favourite Buckingham's apparent attempt to seduce the French queen Anne of Austria soured relations between England and France, even though Louis XIII and Charles were brothers-in-law.

Anglo-French relations had steadily deteriorated after the marriage of Henrietta Maria to Charles in 1625. Louis and Richelieu were spoiling for a fight with England, Richelieu because he had built a fleet to rival the island state's sea power, Louis out of bad blood with Buckingham for brazenly courting Queen Anne. 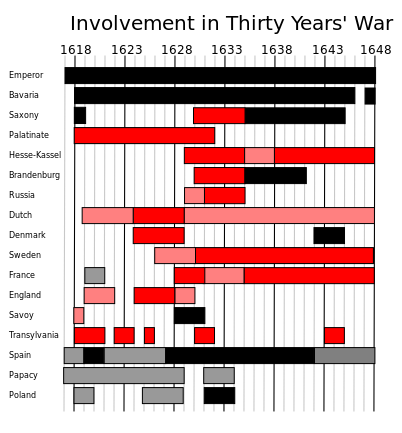 The involvement of so many European countries in the the Thirty Years War Limited Charles I's options for securing loans (red/pink = against emperor, black/grey = for emperor). Source: Wikipedia

Almost all of Charles’ reign overlapped with the Thirty Years War so some of the countries that the King might otherwise have been able to call upon were in no position to help. Europe was, in fact, costing Charles a considerable amount of money from the very beginning of his reign, including maintaining an army in support of the Protestant Union under the command of Count Mansfeld. Charles had committed himself to

the subsidies he had agreed to pay to the Protestant armies in Europe. It remained to be seen whether he could meet these obligations: £240,000 a year for Mansfeld and his men; £100,000 annually to help maintain troops in the Low Countries; £360,000 for the armies of his uncle the King of Denmark; £300,000 or more to equip and pay for the fleet and army being prepared against Spain; £25,000 to protect Ireland.

Preparing for war against Spain obviously ruled out that country, along with the Hapsburgs and their allies who were fighting the Protestant Union (and, later, the Heilbronn League). Gregg adds that Charles

sought new ways of raising money, one of which entailed offering the Crown jewels as security for a loan from Dutch financiers, but nowhere did he find much support. Even from France, in spite of his marriage treaty, he received little comfort.

From 1627 to 1629, England was at war with France so, even though his wife Henrietta-Maria was the sister of the French King Louis XIII, money from this source was obviously out of the question at this time. Later attempts to get French assistance fell on deaf ears despite the King’s personal intervention.

In the early years of his reign, Charles relied heavily on Philip Burlamachi, a financial intermediary. Gregg states:

Most of Charles's foreign transactions had gone through Philip Burlamachi, whose credit stood pledged all over Europe to meet Charles's needs. …Charles was fortunate in having in his service one of the great international financiers of the age whose word and whose credit were unquestioned from the time he advanced money for the little Duke's engines of war until he himself crashed in 1633.

Another potential source was the Pope (Urban VIII) but, despite the intervention of his Catholic wife Henrietta Maria, the Vatican would not consider assisting a Protestant king unless he converted to Catholicism (Gregg).

The Bishop’s Wars of 1639 and 1640, in which Charles came into conflict with the Scots, placed further demands on the King’s already fragile finances. With England no longer at war with Spain, Charles had

begun to look to Spain for financial or military assistance against the Scots, canvassing schemes for obtaining 8,000 veterans from the Army of Flanders in return for allowing Spain to recruit twice as many fresh troops in Ireland, or for a substantial loan in return for a marriage alliance. In the winter of 1639–40, as Charles prepared for a second campaign against Scotland, reports of the successful conclusion of the second scheme circulated widely in both England and Europe.

The treaty ultimately failed, partly because Charles refused to meet Spanish terms, but also because French and Dutch advances and the revolt of the Catalans in June 1640 crippled Spain at the critical juncture.

Charles, in allying himself with Spain, was unlikely to get anything from France as France and Spain were at war from 1635–1659. Under the hugely influential Cardinals Richelieu and Mazarin, France was allying itself with Protestants fighting the Hapsburgs so one cannot assume that they would 'naturally' support Charles against Parliament. Further, the French government had little to spare (despite high taxes) and was itself looking for finance.

By 1640, Charles was so desperate that he

… confiscated the gold and plate which had been deposited for safekeeping in the Tower of London, destroying the reputation of the mint as a safe place of custody. The treasure was returned only after merchants and goldsmiths had agreed to lend the king £40,000 on the security of the Customs Farm

Source: Charles B. Kindleberger, 'A Financial History of Western Europe'(2007)

As much of the treasure in the Tower belonged to Spain, this move could only have undermined Spanish trust in the English king. Nor did Charles's attempts to raise money in Amsterdam (by now the banking centre of Europe) meet with much success, despite the efforts of his wife Henrietta Maria. The bankers in Amsterdam, looking at the state of England's finances and undoubtedly well-aware that Charles had defaulted loans before, wanted collateral. The Queen had only the crown jewels to offer, and the bankers were reluctant to accept them for fear that they would later be reclaimed by the English parliament. Further, the Dutch were staunchly protestant and tended to favour the English Parliament.

By the time the English Civil War started, it is evident Charles had burnt most of his potential foreign financial bridges, and the fact that Parliament controlled the navy and south-east England where most of the traders and merchants were only made things more difficult.

Charles strained every nerve to build up his fighting force. He had never despaired of foreign aid, but one by one his contacts were failing. His Uncle of Denmark remained unmoved, the French made no response to his wife's importuning. In an effort to make available further resources from the family of Orange, the Prince of Wales was offered as husband to the daughter of Dutch William, but the match no longer sounded worth the expense to that practical sovereign …

In relation to France and Spain, the Parliamentary diplomatic representative Sir Henry Vane,

proved a far more astute and skilled diplomatist than his rivals and succeeded in persuading the governments of both countries that the King's cause was doomed;

Overall, there was a

that the best course for the King of England would be to make peace at any price with his subjects.

It was advice that the King, to his cost, did not take.

Has history been unfair to Charles I?

Based on what I know about the period, for me it's more a case of why would other countries help a weakened England? England at that time was strong, but not the strongest fish in the pond. So why would one help a small fish to swallow bigger ones? Spain was already in decline, the Holy Roman Empire was fading, France took advantage of all of those to enlarge itself and became (again) a great power in Western Europe. All of those countries were able to help England, but why would they ? France had been England's opponent for too long, Spain could somehow claim some parts of England (very shaky claims but eh.), HRE had basically no reason to help or not to help. The Hanseatic League COULD have helped England, but the Parliament may have had better connections than the king with them.

The Northern countries may have been able to help, but once again I do not recall any alliance at that time...

The real one that could have helped was Portugal tho, its economy was flourishing, they were England's ally (and still are, but then...) and if I recall correctly were also tied to English's monarchs. They might have not send money because of religious thoughts, I'm pretty sure most Christians didn't have right to borrow money or loan it, except to some banks (Thinking of Florentine's bank and the Hapsburg's one, can't find its name...)

6
1972 textbook by Charles University professor on Thirty Years War
15
Did the Roundheads/Commonwealth of England receive any ideological sympathy abroad?
5
Why was the Old Wardour Castle not demolished after the English Civil War?
3
What primary sources are there for Charles I's seizure of gold from the Tower mint?
11
At the beginning of English Civil War, why did Parliament take a hard line with neutrals, thereby effectively helping Royalist recruitment?
8
Why was Charles I not pressed by *peine forte et dure* to force him to plead to treason in front of the High Court?
7
Why did Britain, not the Netherlands, create the greatest overseas empire?
2
Why did King Charles II cede New Amsterdam / New York to his brother James, Duke of York, in 1664?