What form of cookware did Inuits use in the old days?

I have read that Inuits used some lamps carved from soapstone for heating (driftwood was too precious to be burned). They got some oil for the lamp from blubber. They used a particular species of moss to make a wick.

But what kind of cooking pot did they use? How they made them?

When I read the question, my first thought where leather bags or water-tight basket that you heat by placing hot stones from a fire inside, as was done by some great plains first nations. It seems, however, Inuit also used soapstone and clay cookware (I presume some still do, along stainless steel and china). 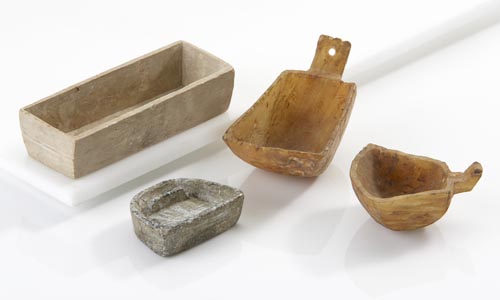 The scoops where made from horn, the pot from soapstone. Source. Not time is given.

According to this paper, clay pottery was used for a long time - and points to reasons why that is actuall surprising:

Cross-culturally, clay cooking pots are correlated with societies situated in warm and dry climates and reliant on foods that beneﬁt from prolonged moist cooking. Neither of these conditions, however, characterized the aboriginal coastal Arctic, where clay cooking containers were produced and used for more than 2,500 years.

I've only skimmed a few paragraphs of the article, however it seems that while pottery was widely known in early human history, it was seldom used in hunter-gatherer societies. While pottery is better for cooking than leather bags clay pots are also heavy and fragile and so better suited for sedentary lifestyles. Burning clay pots is also challenging in a wet, cold climate. So your intuition that pottery was not used is shared by archeologists and anthropolologists.

This tidbit on Inuit cuisine will become relevant in the conclusion:

Arctic peo-ple are famously known as “raw meat eaters,” and, indeed,much of the traditional diet consisted of uncooked foods.However, the common practice of eating raw foods shouldnot be interpreted as an absence of culinary sophistication. Raw foods were seldom eaten plain; rather, they were care-fully prepared following the traditions and practices of the culture. [...] Although many references exist to “boiling” foods in the Arctic, ethnographic accounts indicate that “boiled” foods were, in fact, merely brieﬂy immersed in simmeringliquids. [...] Cooked meat was said to be best when “the outside of the meat is thoroughly cooked and almost too hot to eat, but the small center remains[frozen] like ice”

In the linked paper, the authers experiment with indirect and direct cooking methods. It turns out that indirect cooking (via stones) takes a bit longer using large logs, but not substantially so. However, when using smaller wood chips in the kind of fire on might make indoors, the researches failed to bring water to a boil even using a substantial amount of wood. So under the circumstances on the arctic coast, where wood was scarce, direct boiling was more efficient.

Given the difﬁculty of making pottery in the Arctic region, we might expect stone-boiling methods to have been preferred. And, indeed, these methods were favored wherever wood was plentiful and houses were constructed of materials that could withstand interior ﬁres. In the tundra regions, however, where wood was scarceand houses were made of unprocessed earth or sod, direct-boiling methods were used. Direct boiling was conducted in soapstone wherever it was available; it was only where soapstone was not readily obtainable that ceramic cooking vessels were produced. These correlations suggest that, despite the rather substantial challenges involved in making the pots, the ceramic cooking vessel offered signiﬁcant advantages to the Arctic people. Furthermore, these advantages clearly were perceived to be important enough to offset the difﬁcultiesandinconveniencesinvolvedin their manufacture. But unlike most areas of the world where ceramic cooking vessels were adopted, the beneﬁts had nothing to do with the needfor sustained cooking. Rather, we argue, they relate more to the needs to meet socially created culinary preferences, toconserve fuel resources, and to preserve the livability of the homes than to any improvements in the nutritional qualityof the foods being prepared.

Source: The Arctic Cooking Pot: Why Was It Adopted?; Karen Harry and Liam Frink

Not having access to wood, they used stone blubber-burning lamps called kudlik. The blubber of course came from marine mammals. These lamps have been found archeologically going back 3000 years.

Yes, when they claim that whale-hunting is an integral part of their traditional culture, they aren't kidding.

Not the answer you're looking for? Browse other questions tagged native-americans north-america or ask your own question.

15
What are early archeological clues of humans boiling food?
-1
How did people boil water before metal pots?