Who is the model in this Edward Burne-Jones painting? 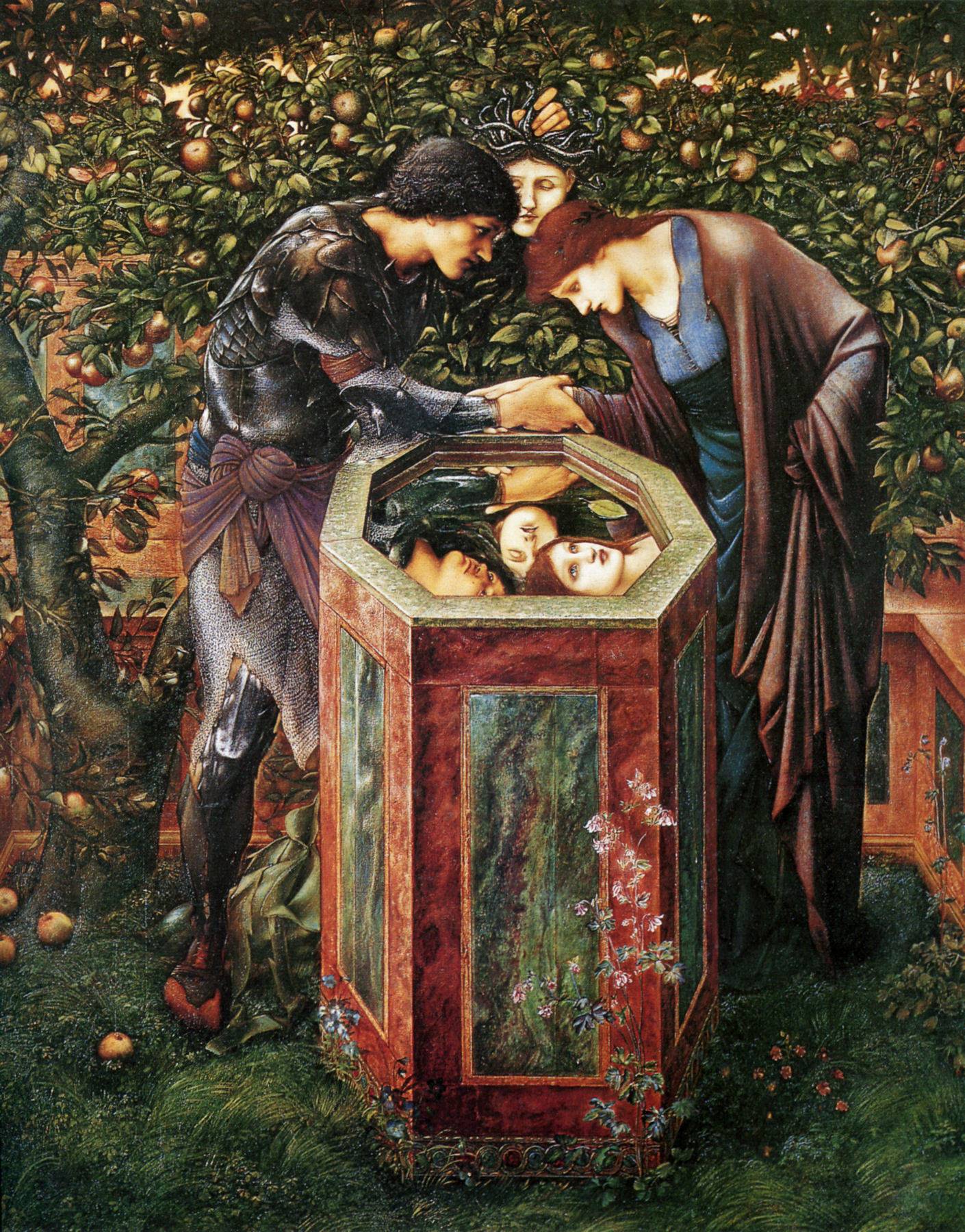 I am preparing a short article on Sir Edward Burne-Jones' Perseus Cycle, specifically the final painting, 'The Baleful Head.' It is crucial that I ascertain the identity of the woman whose likeness was used for Andromeda (see image, above). I suspect it to be Julia Stephen or Maria Zambaco.

The woman is identified as Maria Zambaco:

The theme of Andromeda has a new meaning for Burn-Jones [sic!], as Andromeda is a portrait of his favorite model and mistress Maria Zambaco, while the head of the Medusa bears the features of his wife Georgia.

Which resonates with the following description:

In the mirror the contradictory representations of woman as the virtuous Andromeda and the dangerously sexual, threatening Medusa are resolved thanks to male intervention. Per- seus grasps Andromeda's arm, rescuing her from the danger of her own sexuality in a moment that Rossetti himself described in "Aspecta Medusa":

Andromeda, by Perseus saved and wed,
Hankered each day to see the Gorgon's head:
Till o'er a fount he held it, bade her lean, And mirrored in the wave was safely seen That death she lived by. (Poems, p. 1oo)

The poem combines being rescued and being married as the acts that separate Andromeda from the "death" of looking at the Medusa. The poem, however, both separates Andromeda and the Medusa thanks to marriage, and joins them by suggesting some undefined desire on Andromeda's part to see the baleful head. Andromeda's desire to look at Medusa and her act of looking in the mirror suggest that she contains the fateful seed of female narcissism. The two different images of women, chaste and married, and dangerously sexual, are united in the surface of the mirror.

A visual comparison with other paintings with Zambaco as model in seems to confirm the preference over Julia Stephen for identification, especially when painted by Burne-Jones: 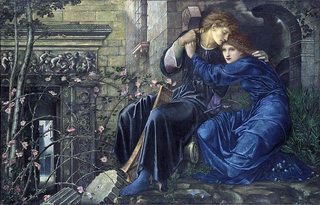 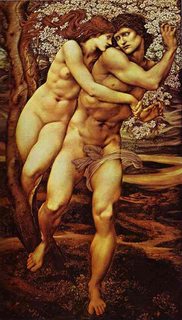 Original in question from "Baleful Head": 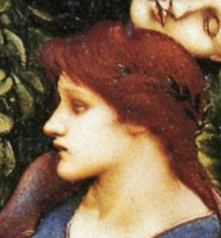 'Known Zambaco' from "Beguiling of Merlin": 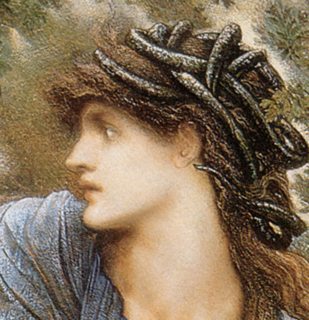 However, this painting subtly alludes to his long-term affair with the sculptress Maria Zambaco Cassavetti, described as the “emotional climax of his life”, and he therefore appropriates the classical world’s use of art as an exemplum virtutis. The violent imagery of the Perseus saga acts as a manifestation of the extremely passionate affair between Burne-Jones and Cassavetti, which was epitomised by their 1869 suicide pact to overdose on Laudanum together. Burne-Jones used Maria to make his last studies for the female figure, as he saw her as an ideal Grecian beauty and therefore more beautiful than the Nereids, just like Andromeda was claimed to be by her mother. However more implicitly, Burne-Jones takes on the mythical role of Perseus as he reflects on societies negative perception of his affair and his inner turmoil between loving his wife and craving his mistress, which are both embodied by the snake he is fighting.

— Isabel Lewis: "Did Edward Burne-Jones replicate or appropriate the Classical world and its ideals? Exploring the transmission of mythology in Pre-Raphaelite art", Medium, May 2, 2021.

Since the real face and the reflection seem rather different:

What struck him about this wild Greek creature, Mary Zambaco, […] was the famous red hair, and next to that the curious irregularity […] of her face. ‘It was a wonderful head,’ he wrote, ‘neither profile was like the other quite – and the full face was different again.’

Compared to Julia Stephen as painted by Burne-Jones: 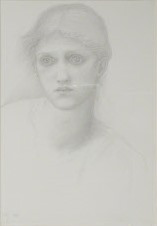 Princess Sabra Led to the Dragon: 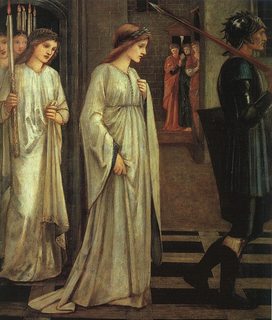 So, which of the two candidates comes closer in likeness seems clear. Unfortunately, his style mattered more than any photorealistic capture of physiognomy, and he laboriously worked and reworked his paintings over sometimes really long periods of time, altering the congruence of the painting with the painted:

A tiny thumbnail sketch exists for the composition (William Morris Gallery, Walthamstow), in which Phyllis is slightly more dominant; two fine studies for the male torso (London art market) show the development of the figure of Demophoön, whose head is that of a studio model. Phyllis has the unmis­takable features of Maria Zambaco, with whom Burne-Jones had been infatuated since 1868 (see cat. no. 49). Her depiction in such a scene as this, with its poignant Latin tag—“Tell me what I have done, except to love unwisely?”—has provoked much discussion on the psychological implications of the pic­ture, which at the very least must have served as an act of catharsis in exorcising the artist’s feelings of guilt toward his wife as well as toward his mistress. […]

Burne-Jones could continue this line of research in London, where Italian models found ready employment in artists’ studios. Two of the most popular were Alessandro di Marco and Antonia Caiva, whose name Burne-Jones inscribed on a drawing — a nude rather than a head study — in the exhi­bition. This is extremely unusual. He almost never identified his models, and it is generally unwise to haz­ard a guess on the subject. There is an understandable temp­tation to discern the features of, say, the glamorous Maria Zambaco in some given drawing, and it is true that she and other friends and relatives—Georgie and Margaret Burne-Jones, May Morris, Fanny Cornforth, Marie Spartali, Frances Horner, and so on—can sometimes be recognized. But the vast majority of Burne-Jones’s sitters were professional mod­els who remain anonymous. We shall never know the name of the “little Houndsditch Jewess, self-possessed, mature and worldly, and only about twelve years old,” who sat with such abandon for the heads of the winds in Sponsa de Libano (fig. 80; see also illus. on p. 188). Equally elusive is the “new model” he discovered toward the end of his life— “a curious type,” Graham Robertson recalled, “quite away from his usual face. She had very small eyes which gave her a rather sly expression, and she evidently interested him (pictorially) very much.” Even if we know their names, Burne-Jones’s models cannot necessarily be identified. Who would recognize Bessie Keene and her mother, two professional models he often used; or Edith Gellibrand, an actress (stage name Edith Chester), who is said to appear in The Golden Stairs (cat. no. 109); or Reserva, “a tall, dark girl of gipsy blood”who was also on the stage, Luke Ionides noticing her in the chorus of The Yeoman of the Guard} We should never underestimate Burne-Jones’s extraordinary capacity to impose his ideal on his models. “I have often watched him drawing from the life,” Robertson wrote, “and so strong was his personal vision that, as I gazed, Antonelli the model began to look very like Burne-Jones’s study, although the study never began to look like Antonelli.”

Maybe this is Margaret Benson? Margaret was a model that Edward Burne-Jones had seen, and was introduced to at the Albert hall, around time of preparation for this painting.