Is the adamic alphabet the origin of the Greek? [closed]

The adamic alphabet seems to cover the entire Greek alphabet including even more letters and symbols, like sampi, heta (which I thought was just the origin of eta, but apparently not), yot, koppa etc... From the source:

I have found another source here that seems to have studies the background of the Greek alphabet in detail. There is no mention of the adamic alphabet, and their description of the origin is different:

The Greeks were the first Europeans to learn to write with an alphabet, and from them alphabetic writing spread to the rest of Europe, eventually leading down to all modern European alphabets. Incidentally, the Greeks tried writing once before. Between 1500 and 1200 BCE, the Mycenaeans, an early tribe of Greeks, adapted the Minoan syllabary as Linear B to write an early form of Greek. However, the syllabary was not well suited to write Greek, and the exact pronunciation of Mycenaean words remains somewhat obcure. The alphabet, on the other hand, allowed a more precise record of the sounds in the language.

From the shape of the letters, it is clear that the Greeks adopted the alphabet the Phoenician script, mostly like during the late 9th century BCE. In fact, Greek historian Herotodus, who lived during the 5th century BCE, called the Greek letters "phoinikeia grammata" (φοινικήια γράμματα), which means Phoenician letters.

Is the adamic alphabet simply an even earlier precessor to the Greek alphabet?

That particular website, well ... its not very credible. Its part of Wikia, a site designed for Science Fiction/Fantasy fans to create their own wikis. In other words, things don't get deleted/removed/edited out there just because they have no relation whatsoever to reality. This person's Wikia site reuses the name of the defunct precursor to Wikipedia, which I find highly dishonest and misleading.

Outside of that website, I could find one other decent reference to this supposed Alphabet: from a Mormon website.* It claims this is the alphabet used by the speakers of "Adamic", supposedly the world's first language, spoken by Adam and Eve, and also currently spoken in Heaven. In other words, this is somebody's religious belief.

The current scholarly consensus is that the Greek Alphabet is was copied from the Phoenician Alphabet. Technically this was an Abjad, not an Alphabet, as Semitic languages have predictable vowels, and thus don't usually need to bother representing them in their writing. Indo-European languages like Greek don't have that feature, so the Greeks had to re-purpose some unneeded Phoenician consonants to indicate vowels. This is how the Greeks managed to get credit for the first Alphabet, even though all they really did was hack an existing Abjad to work for their language. 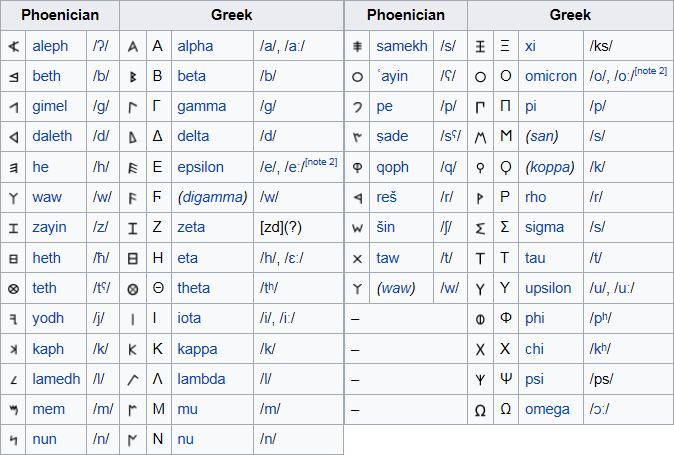 * - Not linked, as I don't believe it deserves the page-rank bump.

Not the answer you're looking for? Browse other questions tagged language greek or ask your own question.

5
Latin/Greek for assassin
16
Why was not Greek alphabet adopted by other languages given the Greek influence?
7
Origin of an old museum ticket
5
The greek 'daktylos'
6
What determined the order of letters in the alphabet
13
What was the northernmost region/city in the Roman Empire that spoke Greek as the native language?
9
What is the history of the use of word dividers in Greek?
7
Why didn't the Greek language survive in Egypt?
44
When did “&” stop being taught alongside the alphabet?