Were there any "retaliation" anti-tank weapons widely used by infantry in World War II?

"Standard" anti-tank weapons used by infantry included bazookas and anti-tank rifles (the latter being heavier than infantry rifles, and requiring special shells). In a "pinch," infantry used "Molotov cocktails," made of gasoline in glass bottles with lighted fuses.

But these weapons were used by "active" infantry who were braver, or at least more aggressive than most, and who sought out fights with tanks. Many studies have shown that "average" soldiers will "fight when fought" and fire when fired upon, but otherwise not seek combat. Such soldiers often took refuge from tanks in trenches, where tanks could run them over.

Was there a weapon, such as an explosive attached to the end of a club that entrenched soldiers could stick into the bottom of tanks, thereby almost assuring the destruction of the tank as well as the weapon? (This would be for "retaliation" when their own lives were directly threatened.) Were such weapons considered too dangerous to issue to soldiers in trenches? Or did armies prefer other anti-tank measures? (For instance, Soviet commanders would have tanks "iron" entrenched soldiers in practice to teach them to dig deep enough to avoid tanks.)

I would expect such weapons, if they existed, would more likely be used by Soviet or Japanese soldiers, with their fatalistic view of the world.

Anti-tank development is littered with attempts, formal and improvised, at giving your average soldier the ability to blow up a tank at suicidally short range. I'd recommend Ian Hogg's book with the no nonsense title Tank Killing. Unfortunately my copy seems to have taken a walk, so I'll have to do this from memory. I'm going to skip what the other answers have covered.

The most effective and ubiquitous weapon that fits your description is the Panzerfaust 30. Appearing in 1943 with an effective range of just 30 meters, it fired a highly effective shaped charge lobbed along at a pokey 30m/s. The weapon was discarded after a single shot. It was issued to all sorts of troops in great quantity. It was only in late 1944 that Panzerfausts with a range of 100m reached the troops.

The US Army, desperately playing catch up with European armies, got the idea maybe a soldier could shove various pieces of their kit into a tank's wheels and make it throw a track. In Nov 1939 US tanks were scarce, so they brought out a T5E4 combat car as a stand in and shoved rifle stocks, machine gun barrels, and rocks into the tracks. First they figured out this was basically impossible to do on a moving tank, so they slowed it to a crawl. Once they finally got the things jammed in there they discovered that a tank is very good at destroying rifle stocks, machine gun barrels, and rocks. Source: The Chieftain's Hatch: Rifles vs Tanks.

The Molotov cocktail was mentioned in the question, and I believe this qualifies. While they could be used by dedicated tank hunter teams, their fragility and extremely short range did not make them good weapons in this role. In order to be effective, the burning cocktail had to strike the engine cover at the rear of the tank. This was best done after the tank had driven past you, or from a second story window, or the firing slit of a bunker.

They could be improvised, but many were manufactured. The Finns, during the Winter War with Russia, lacking anti-tank weaponry, made half a million of them. Rather than a rag in a bottle of gas, it was gasoline or other fuel to make it burn, plus rubber or tar to make it sticky. Rather than using a rag, they used a bundle of wind-proof matches or a glass vial of exothermic chemicals.

The preferred improvised weapon was a bundle of hand grenades, the Germans called them Geballte Ladung. An individual hand grenade wouldn't do much to a tank, but a bundle of six warheads tied to a single stick grenade could. Not a lot of damage, but it would do something. It could be safely carried, created out of materials at hand, and with the handle it could be thrown up to 30 meters. 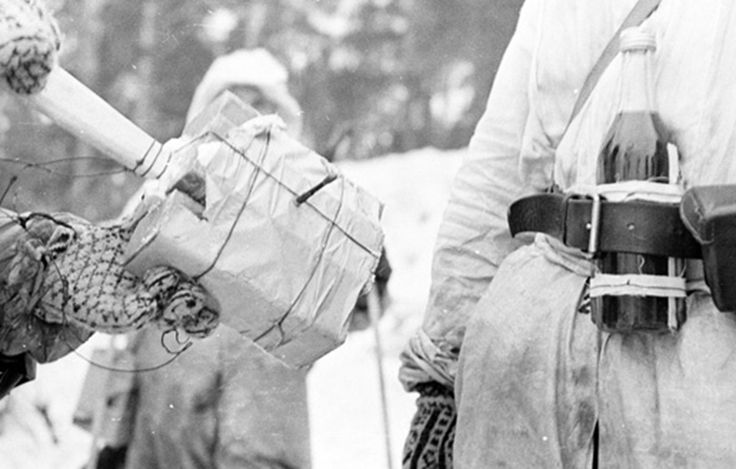 (Finnish Soldiers with a bundle of grenades, and a Molotov Cocktail using matches as the igniter)

The Japanese have the weapon the OP seems to be looking for: the Lunge Mine, which would be fatal for the user, although it isn't well-documented. A similar weapon could have been improvised by attaching a Type 99 mine to a sturdy stick. They also had a cheap shaped-charge anti-tank grenade, the Type 3 which could have been used in a hand-to-hand attack on a tank. They used flamethrowers as anti-tank weapons a few times, with some success.

The Soviet RPG-43 was a shaped-charge hand grenade. This required getting within throwing range of a tank, and was also quite difficult to use correctly.

The British Blacker Bombard had a range of only about 100 yards and frequently threw fragments back towards the weapon crew if it hit. However, it was probably less dangerous than the Smith Gun which killed several crew without ever seeing action against the enemy, or the Northover Projector, whose incendiary ammunition tended to break and ignite inside the weapon.

The most dangerous of the early-war British anti-tank weapons was probably the "Sticky Bomb", which tried to glue a powerful explosive charge to a tank, with a five-second delay fuse for the user to take cover. It was replaced later in the war by the Gammon Bomb, which was still pretty dangerous, but was used to kill several tanks in Normandy. The PIAT wasn't a great weapon, but wasn't in itself terribly dangerous for the user.

Lets not forget the Satchel Charge. This often required the person using it to put themselves in harms way.

The World War II-era United States Army M37 Demolition Kit contained eight blocks of high explosive, with 2 priming assemblies, in a canvas bag with a shoulder strap. Part or all of this charge could be placed against a structure or slung into an opening. It was usually detonated with a pull igniter. When used as an anti-tank weapon, charges were sufficient to severely damage the tracks. 4 kg (8.8 lb) charges were enough to destroy medium tanks.

In Saving Private Ryan, Hanks' Lieutenant character has his squad improvise a "sticky bomb", which he claims is "in the field manual". It involved a sock, explosives, and grease to make it stick.1

The Germans it seems actually produced devices with a similar purpose, which attached to a tank using magnetisim. The purpose of this device was to penetrate the armor however, whereas Hanks' improvised device's goal was simply to disable the vehicle by derailing one of its tracks.

The British also produced devices for this purpose. It really was sticky, rather than magnetic, which meant soldiers had to be careful not to stick it to themselves (!). Not many of them were used, but some were successfully used in combat.

1 - I'm not sure if that was a real thing, but the attention to historical accuracy in the parts of the movie I do know about was the best I've ever seen.

My uncle was in France 43/44. Told of hunting German tanks, ambushing them running over his fox hole as he used dynamite to get a track off as his buddies shot at ports and view scopes. Spoke about putting frags in the barrel first, then phosphorous, said that was when it got exciting. I'd call it insanity. I call him a brave man. He got badly wounded but lived to tell the tell.

There were a few devices that were intended to perish with or in the aftermath of the tanks destruction, but none of them were manned:

The Goliath, kind of a bomb on tracks.

The soviets tried with trained dogs but that did not go too well. Although it could be called "MAD", that would be cheated because the dog did not know about neither the mutual, nor the destruction part.

So no, no "retaliation" or MAD weapons were officially issued. Obviously, any weapon not meant for close, suicidal combat can still be used as such. And many weapons were so dangerous, that they were not far from MAD territory. But all of them contained the chance and were issued in the spirit that the user would escape unharmed. As far as I know, no suicide weapons were ever officially sanctioned in WWII land combat.

Not the answer you're looking for? Browse other questions tagged world-war-two military or ask your own question.

25
What was the first battle in history fought by vast-majority-% "distance-shooting" non-mechanized force?
3
What were the German "general" ranks in World War II?
6
Was there more than one way for anti-aircraft fire to shoot down a dive bomber in World War II
4
During World War II, were there any parts of the Japanese overseas empire that was capable of local re-supply?
11
Has there been an occasion where ranged weapons were available but not used?
2
Were there documented battles of opposing air aces in World War II?
2
How "old" is mechanized infantry in terms of usage in warfare and what should be called as such?
2
What evidence is there of tank-vs-tank combat in Asia during the second world war?
4
Was game theory used during World War II?
0
Which kingdoms were using WWI weapons at the time of the second world war?