Why did sculpture and architecture become unpainted white, like skeletons of the dead? [closed]

Ask Question
Asked 3 years ago
Active 3 years ago
Viewed 262 times
-4
Closed. This question is opinion-based. It is not currently accepting answers.

In ancient times sculptures and buildings were painted and colorfully decorated maybe even with clothes and jewels, and sometimes made out of glowing bronze. What was the motive and, if any, the political driving force, behind replacing them with white unpainted sculptures and architectures sometime at the beginning of the renaissance?

Speculating out of the blue, I'd suspect that it has to do with the ruling power demonstrating more deterrence. Clean white is the bones of dead people. It should be instinctively frightening. Below a building of power, looking more than anything else like a deadskull with its colorless gaping openings and spread out bone pipes like in a public mass grave. 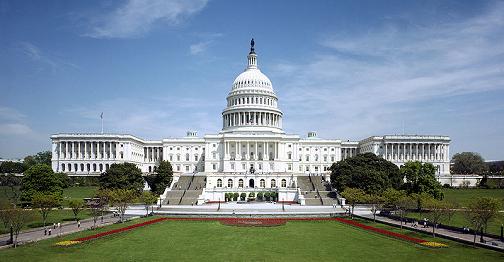 1) By the time wealthy western Europeans were embarking on grand tours of Greece and Italy and describing ancient Greek and Roman temples in writing and in paintings, the original paintwork had mostly all been weathered away. Imitation of this architectural style therefore omitted the decoration.

2) Protestant reformation. Frescoes and lavish decoration were removed from churches as signs of idolatry etc. Decorated walls in churches were typically over-painted white.

The neoclassical architecture of the US capitol building, pictured in the question, copies elements from classical Greek and Roman architecture - domes, colonnades, porticoes. It is designed to reflect the architect's admiration of the beauty and majesty of those ancient buildings, not to make local citizens feel afraid or oppressed.

The word "Capitol" comes from Latin and is associated with the Temple of Jupiter Optimus Maximus on Capitoline Hill, one of the seven hills of Rome.

In spring 1792, United States Secretary of State Thomas Jefferson proposed a design competition to solicit designs for the Capitol

A late entry by amateur architect William Thornton was submitted on January 31, 1793, to much praise for its "Grandeur, Simplicity, and Beauty" by Washington, along with praise from Thomas Jefferson.

The Library of Congress says

The published guidelines stipulated matters of fact -- size and number of rooms and materials -- not issues of taste, such as style of architecture, historical association, or symbolic meaning. Thus the competitors themselves proposed ideas of how to convey America's new political structure and social order. Their suggestions, ranging from simple to complex, economical to expensive, reflected commonly held beliefs about America's governing population -- primarily farmers and merchants -- or promoted benefits promised by the Constitution.

Most competitors drew upon Renaissance architectural models, either filtered through the lens of eighteenth-century English and American Georgian traditions or based directly on buildings illustrated in Renaissance treatises. The Capitol competition coincided with nascent Neoclassicism in America, in which forms and details from Greek and Roman architecture were revived. Three of the competition entries were inspired by ancient classical buildings.

There really is no evidence that neoclassical buildings were intended to resemble corpses or mass graves or to invoke feelings of fear. Instead they were intended to evoke admiration for their perceived beauty.

Your association of white with death didn't seem to make the list.

Not the answer you're looking for? Browse other questions tagged political-history art architecture death sculpture or ask your own question.

8
Was there anything like African American architecture style or symbolic in the beginning of 20th century?
7
When did the Greeks start the practice of burying their dead relatives' bodies?
3
Why is Sulla's nose in the bust in Munich Glyptothek broken?
9
What did they call Gothic and Baroque architecture before the modern terms came into use?
5
Why there is no Islamic architecture with glass in windows before 18th century?
5
What are the red and white sectors of The Tower of Babel (Rotterdam)?
1
In the painting “Ariadne”, by Arthur Streeton, why are the sails of the ship white?