Is there evidence that Stalin stopped religious persecution during WW2? [closed]

Ask Question
Asked 4 years, 1 month ago
Active 3 years, 11 months ago
Viewed 507 times
2
Closed. This question is off-topic. It is not currently accepting answers.

I read in some articles that during WW2 the Soviets reopened the churches and allowed their people to do their religious practices.

Is there any evidence to confirm such things?

If yes up to which level and for how many years this tolerance continued?

First of all, all the churches were never closed, although a lot of them were. Religious practices were never disallowed, although they were strongly discouraged at best. There were semi-official plans of eradicating all religion, for what I know they were indeed abandoned some time during WW2. The authorities wanted to get more support of the population which, despite their best efforts, still had a significant percent of religious believers. It seems that most of those reopened churches were, in fact, reopened by the Germans, then the Soviets just let them be. Religious persecution (of varying degree), nevertheless, continued almost until the end of the Soviet Union.

As for the numbers and years, I found this chart (in Russian), I can't trace it's origin, but at least some numbers seem to match, so I made a quick and dirty translation into English (sorry, I barely know those church names even in Russian, but I hope it's still understandable). The lowest point on the chart isn't zero, it's somewhere around 600. 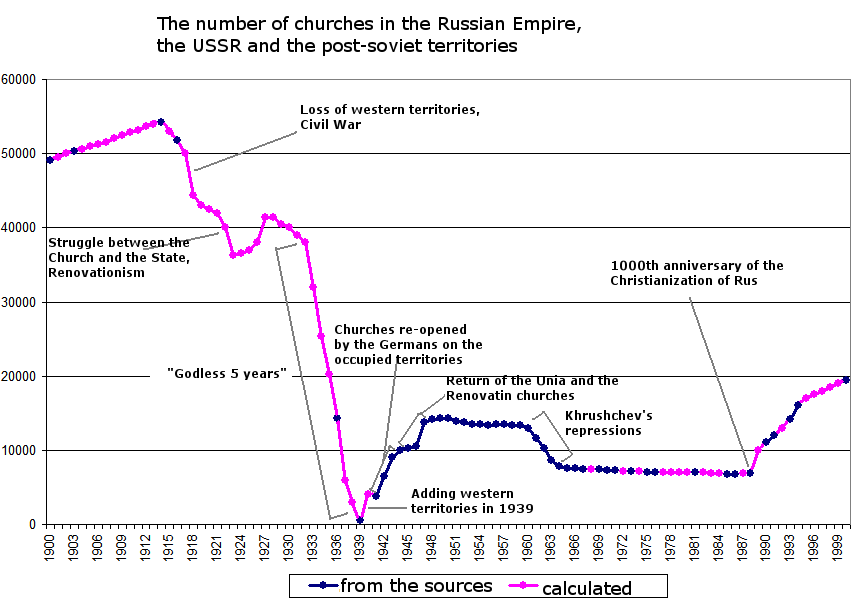 I have heard of references that during the worse days of WW2, that the USSR opened up religion in order to improve morale. This meaning that they didn't openly encourage it but didn't prosecute it as strongly. I have seen this referenced in the Soviet Storm: WW2 in the East.

Not the answer you're looking for? Browse other questions tagged world-war-two soviet-union religion stalin or ask your own question.

17
What role did the Ancient Samurai heritage play on Modern Japan during WW2?
42
Why were there no religious wars in Poland?
5
What intelligence successes did the Axis have in WW2?
5
Is there evidence people outside USSR were involved in attacks, within Soviet borders, between c.1928 and Stalin's death in 1953?
4
Did ancient and/or medieval cultures that emphasized the danger of religious pollution also exert more control over women?
2
Why did China begin persecuting Falun Gong after tolerating the movement for nearly a decade?
3
Was it ever possible to see students with burka/paranji having education at the schools and universities of the Uzbek Soviet Republic?