Did Machimoi fight in Phalanx formation?

The 'Machimoi' were low ranking Egyptian foot soldiers, pressed into service by the Ptolemaic Dynasty during a period of manpower shortage.

The term Máchimoi... ...commonly refers to a broad category of ancient Egyptian low-ranked soldiers which rose during the Late Period of Egypt (664–332 BCE).

Wikipedia has only a brief article on the Machimoi, and references very briefly the use of pikes.

...suggesting that the term was rather an indicator of their military role (for example, the pike-bearing máchimoi epilektoi or the mounted máchimoi hippeis)

The game 'Rome II: Total War' suggests they could be employed in a Phalanx, and have long pikes while maintaining 'Egyptian-looking' armour. I'm guessing this has obvious historical failings though...

Were the Egyptian soldiers in formation alongside the more professional Ptolemaic Phalangites? Is it known what equipment they were given when in this role?

The game 'Rome II: Total War' suggests they could be employed in a Phalanx, and have long pikes while maintaining 'Egyptian-looking' armour. I'm guessing this has obvious historical failings though...

Paradox generally does a good job on their history, for a video game, and I'd be surprised if they made an elementary mistake. Whoops, Total War is by Creative Assembly. Don't know their rep for historical accuracy.

The basic phalanx, soldiers in a tight, rectangular formation moving forward as a unit, usually with polearm and shield, was around for millennia by the late Egyptian period. The earliest depiction is in the Stele of the Vultures celebrating a victory of Lagash over its neighbor Umma around 2500 BC. 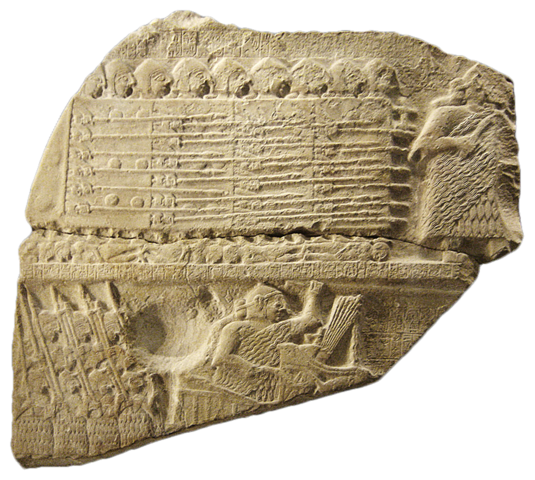 It remained, with many tweaks, the dominant form of warfare in Europe and the Near East until the Roman army of the middle republic developed the more flexible legions around 250 BC.

After Alexander The Great conquered Egypt in 332 BC, their armies followed the Greek model and their main military force moved away from bowmen and chariots to heavy infantry. After that point yes, Egyptian infantry would definitely be in a phalanx formation, wearing armor, and wielding pikes.

Not the answer you're looking for? Browse other questions tagged military ancient-history egypt or ask your own question.

11
Army formation: veterans at the first line
6
How did melee soldiers in the front rank of a formation fight without getting tired?
3
Testudo formation vs ballista?
5
Was it not possible to exploit the gaps between each pre-modern melee formation?
9
How could a chariot work against a phalanx?
13
Did the more experienced hoplites fight in the front or the back of the phalanx?
7
Why didn't Romans fight in a single line formation?
51
Why did the Roman military start to favour swords over the spear phalanx?
8
What do men in the middle of a phalanx contribute?
5
Why can't people on the back of the phalanx “reorient” their shield?