Why did the pre-Islamic Arabs identify themselves as descendents of Ishmael?

There's a tradition that the Arabs are descended from Ishmael, son of Abraham. Before Islam, the Arabs did not believe in Yahweh but had their own, polytheistic religions. So why did they have a legend that they were descended from someone from the Hebrew scriptures?

It doesn't make sense to me that they claimed to be part of the Hebrew tradition if they didn't believe in the Hebrew religion. I wonder if someone can explain that.

That is actually a false perception that All Arabs consider themselves to be descendants of Ishmael.

According to Arab traditions, Arabs categorized themselves into two main branches1:

Among these two, only the Qahtanites, those who are believed to have originated in Southern tips of Arabian peninsula (Mainly Yemen nowadays), were considered to be "original" or "pure" Arabs.

Pictured below, a tree of Qahtanite Arabs and their tribes: 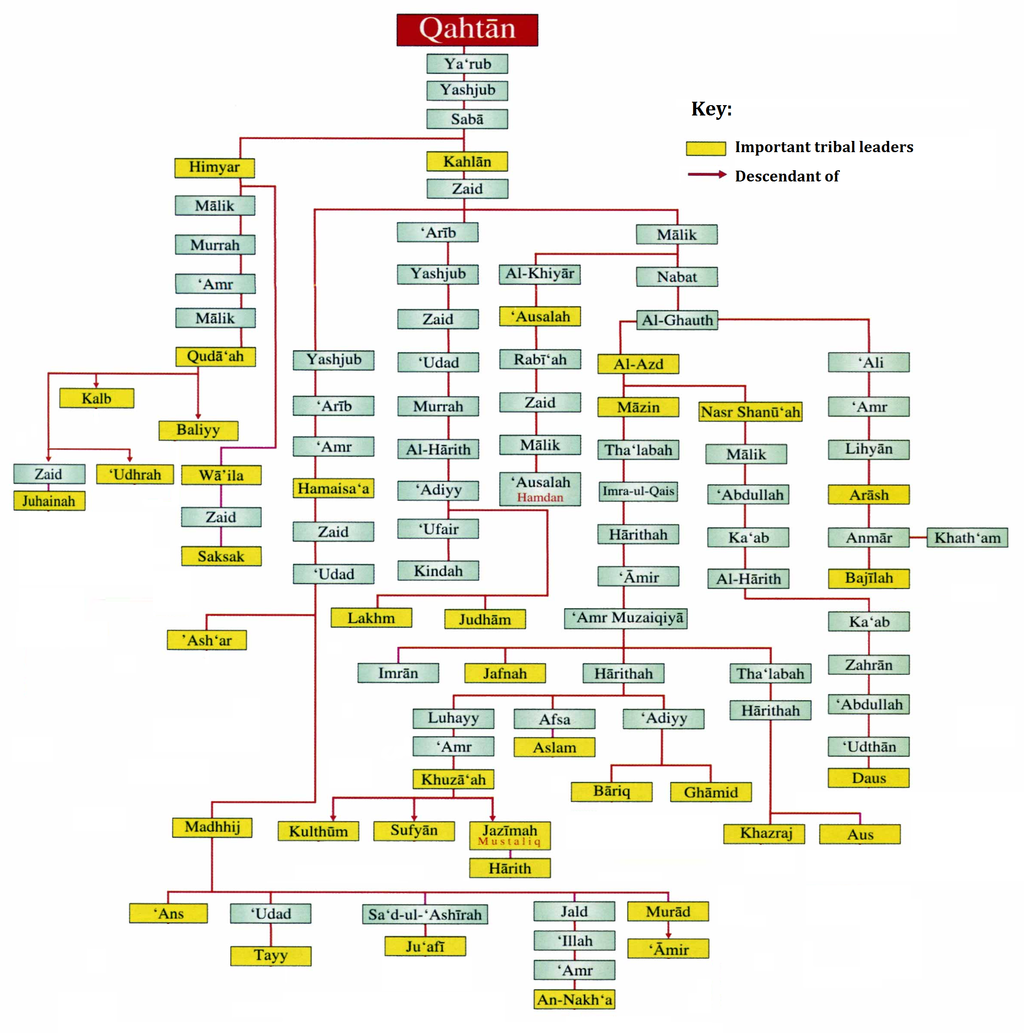 Note the tribal leaders, many of them are founders of important tribes such as Banu-Kalb, Banu Juhainah, Banu Aslam, Banu Tayy, Banu Aus, Banu Khazraj etc.

The Adnanites were called "Arab-e-Mustarba / عرب مستعربة" or "Arabized Arabs". They are the ones who are supposed to have been descended from Ishmael, son of Abraham through Ishmael's descendant Adnan and had adopted the Arab identity and culture. As Abraham was founder of Hebrews and Hagar was Egyptian, that would make the Adnanites to be Hebrew or Hebrew-Egyptian in actual descent as per the legend. But since they adopted Arab identity and culture, they became "Arabized Arabs". Pictured below, a tree of Prophet Muhammad's descent from Adnan: 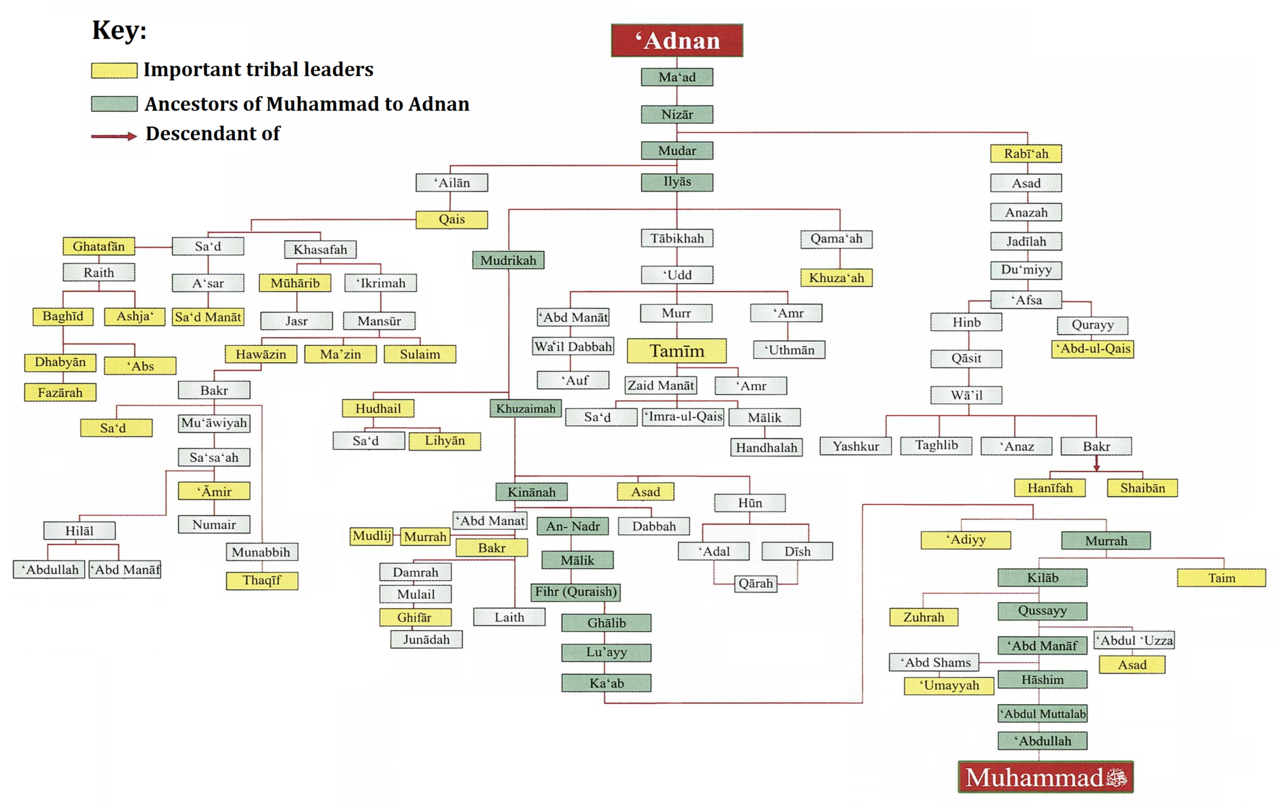 As already mentioned, Arabs held that legend long before Islam so it wasn't Islam which created that legend. Not to mention, it wasn't just them who held that legend of Ishmaelite descent. I remember a letter from a Byzantine clergy man too who referred to Arabs as Ishmaelites. Sadly I can't find it right now but when I do, I will link it here.

Moreover, Yahweh is also known as Elohim in Hebrew bible. The Word Allah is the Arabized form of that word. So yes Arabs did believe in Yahweh. The deities they worshiped before Islam were considered to be daughters/sons of Allah, while the Abrahamic deity Allah remained the highest deity of even the polytheist Arabs. Even before Muhammad, as linked by Ted, Many Arab thinkers tried to preach monotheism, claiming it to be the original faith of Ishmael, one which was corrupted by polytheism. Although some Abrahamic traditions were preserved, to quote a few:

Islam is considered by Muslims to be restoration of original faith of Abraham which according to them had been corrupted and changed by the Jews, Christians and Polytheist Arabs. That's precisely the reason why Muslims consider People like Adam, Abraham, Isaac, Moses, Jesus etc to be prophets of Islam as they see Islam as restoration of the original Faith, not a new religion in itself.

We do know however that:

1. The first documented instance of this division that I could find was in Umayyad Era which is post-Islamic. Ibn Kathir and Ibn Khaldun, noted Arab scholars have also noted this divison however they were both born in post-Umayyad era. Nevertheless Pre-Islamic poetry does contain claims of being descended from Ishmael as a matter of pride. I couldn't find any documented references of this division before Islam which may have been due to the fact that Arab literacy was very low and they were a people who mainly relied on oral tradition. Or it may have been that Umayyads created this division (Note, division, not the legend itself) for some unknown political motives (Divide and rule?), who can say now? It could also be political opponents of Umayyads who may have sowed this division as Umayyads relied completely on Arabs for their power while holding non-Arab subjects out of power, which lead to them flocking to banners of opponents of Umayyads. So it would be imperative for any rebel leader to sow dissent in supporters of the ruling Imperial dynasty.

2. As per legends, not documented history.

Accepted position from Islamic perspective is that genealogy can be traced from Adnan to Prophet Muhammad. But same cannot be traced from Ishmael to Adnan. However, there are inscriptions about Adnan and he is revered or projected as a Nobel man on his own accord. In the actual inscriptions, he is not linked with Ishmael. Any actual attempt to link genealogy of Adnan with Ishmael is unrealistic. Adnan lived just 150 years before Christ (or the supposed time of Christ). And he is projected as just grand or grand grandson of Ishmael which is unreal on simple calculations. There is actually no mention of Abraham or Ishmael in pre-Islamic Arab Poetry. The only exception is poetry when Prophet Muhammad had born already. That is the poetry of Hanifia proponents. Hanifia movement had emerged there at that time. That Hanifia movement first time used Abraham or Ishmael in poetry. Before that, only Jews used to call them Ishmaelites and there was no approval from Arab side to this claim of Jews. Jews used to raise such claim only to "prove" that their bible was authentic and correct. A time came when some half educated and passionate people from Arabs started believing in Jews propaganda. That was the start of Hanifia movement.

If Adnanites were "Arabasized Arabs", then Abraham was a native Arab. He was born in Mesopotamia so he was native to that land. There were already different sorts of legends about him in Arabia/ Mesopotemia where according to legends he used to argue with star/sun worshipers and then he was expelled from that land by the order of king of that land.

Anyways, Abraham existed only in far ancient legend and did not exist in pre-Islamic Arab poetry except for the Hanifia poetry and that was directly inspired by monotheism of Jews. In the genealogy between Prophet Muhammad and Adnan, there is no link to Allah or Yehweh or Ellohim or similar names to Ishmael or Abraham except only for the father of prophet Muhammad whose name was Abdullah. Allah was not the most high god for the pre-Islamic Arabs. The most high was Hubble (not that telescope which is actually high). Even in the family of prophet Muhammad, Abdullah was the name of youngest son of Abdul Mutlab. Names of elder brothers of Abdullah were like Abul Manaf etc.

"Ishmaelites" was a title that was invented and promoted by Jews themselves.

AdnanAdnan
1
1
Add a comment  |
Highly active question. Earn 10 reputation (not counting the association bonus) in order to answer this question. The reputation requirement helps protect this question from spam and non-answer activity.

Not the answer you're looking for? Browse other questions tagged islam arab or ask your own question.

-2
Are the ancestors of Saudi royal family Jewish?
7
What is the origin of the Arabs in pre-Islamic Yemen and Arabia?

12
Did Arabs actually raise a red flag on the dome of their commander's marquee during the Haraam months?
7
What is the origin of the Arabs in pre-Islamic Yemen and Arabia?
34
What disruptions were brought about by Islam that the Arabians saw so many victories?
21
Why is Indonesia a Muslim country?
6
How did various Islamic polities incentivise conversion?
6
What was the world's largest religion in 1500?
8
What do we know about the location of Islamic schools in pre-colonial Africa?