How was silver/gold mining done in colonial Americas?

I've heard a lot about the vast amounts of silver and gold that Spain brought back from the Americas. I imagine that they looted the Aztecs and other peoples at first, but silver/gold exports continued for a long time, so there must have been mines.

How were these mines operated? Particular in the days before machinery and explosives, this must have been very hard labor. How many people worked a mine and how was the ore extracted? How did they keep the mine from filling with water (either rainwater or groundwater)?

Gold was usually found in low places, in the middle of rain forests. Even though there were gold mines in Buriticá y Remedios (Nueva Granada), the usual method was finding alluvial gold, dragged by sand in the rivers.

Silver was extracted only from mines. In the Altiplano (Andean Plateau), the natives used an "explosive technique" that was adopted by the Spanish: they filled cracks in the rocks with water, which broke the rocks when freezing at night. At the beginning they used hand mills, replaced after by hydraulic mills. To refine the silver there were two methods used, foundry and amalgamation. 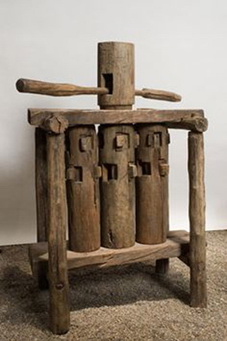 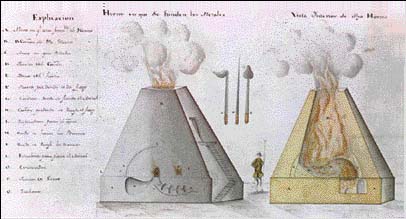 Silver was extracted mainly from large, deep mines. The largest of these was at Potosi in modern day Bolivia. It employed nearly 60,000 people. Rain was not much of a problem because it was located in high, arid mountains.

Two things made the system work. The first was a system of forced, tribute labor. These laborers (less than 10%) of the work force, had the unpleasant, dangerous jobs of transporting the ore to the surface. The other, relatively "safe" jobs of digging the ore were filled mainly by wage workers. The second was the concurrent discovery of the Patio process, the first "amalgamation" process, for extracting ore, that was a major improvement over existing processes.

Mining practices were relatively sophisticated by the 1500s in Europe, especially in Germany. The same technologies used in Europe were installed in early colonial mines.

An excellent reference on 1500s era mining is De Re Metallica by Agricola, wriiten in 1556. The techniques shown here were highly relevant until the early 1800s.

Wiki article: https://en.wikipedia.org/wiki/De_re_metallica (links to free versions of the text, in article). Note the illustrations with various mechanical linkages and techniques for extraction and processing.

P.s. An interesting history factoid is that the premier translation of Agricola's book from the Latin was done by (future) President Herbert Hoover and his wife in 1912.

Not the answer you're looking for? Browse other questions tagged spain colonial-america north-america 16th-century south-america or ask your own question.

16
How densely populated were the Americas prior to European colonization?
2
How did the different regions' cultures in colonial America eventually begin to unify?
8
How did the education system in Colonial North America work?
2
How far did climate affect civilisation development in the Americas?
10
How did American colonial rights and conditions compare to those within the British Isles?
3
How was religious diversity represented in the Thirteen Colonies?
11
What was an “alower of Society debts” in colonial America?