Why do French houses have exterior window shutters? [closed]

One of the things tourists notice about French houses is the presence of exterior window shutters: 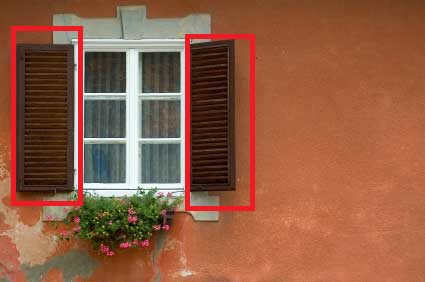 Why do French houses have exterior window shutters? When did they first appear in France? Are they peculiar to France, or did they perhaps "migrate" from other parts of Europe?

Since the question has been put on hold, I have asked it here: https://www.quora.com/unanswered/Why-do-French-houses-have-exterior-window-shutters

In case of deletion, I have archived the content: https://web.archive.org/web/20170309172128/https://history.stackexchange.com/questions/35813/why-do-french-houses-have-exterior-window-shutters

As mentioned in the comments, the exterior shutters are an old tradition in southern Europe.

They can be basically wooden boards that are opened and closed, or they can have open slits. The first type effectively protects the window from the eyes and intruders but doesn't let the sun in. Typically, when these are closed, it's night or the owners aren't in. In Portugal, they are considered quaint but are common only in old (think 50+ years) one or two storey houses.

Another common type it to have thin open slits. These are less solid for preventing break ins, but they let air and light in. If the window is facing the summer sun, it will naturally be kept close against it without impeding normal activity inside the house. Typical in old houses (30 something years) in some areas.

Then there are shutters composed of thin strips of wood organised in diagonal to form tiny open diamond spaces. These are not common and will be seen only in areas of ancient moor influence, whether regionally (say Southern Portugal) or in city areas that were, in medieval times, consigned to people of this religion. The architectural tradition remained after the last moor disappeared. But it's still not common.

In Portugal, these exterior shutters that work like 'doors' are a species in sharp decline. Most people prefer exterior shutters that are large strips of PVC and can be rolled up and down at will, whether to just make way to little openings to let air and a bit of light in, or to shut close completely. They often have a little crank that allows the homeowners to lock the shutters and avoid anyone from coming in.

Link to traditional shutters; in English

Link to PVC shutters; in Portuguese, but just click on the images to see what they look like.

In short, the traditional shutters are a protection against intruders, interested neighbours' eyes and the sun and go back to when houses didn't have window panes. To still use them depends on a love for traditional things and not having a good practical and estetic replacement.

I'm sorry, but I may have been a bit off on the reasons for keeping the shutters 'alive'. It has since dawned on me that privacy might be one of the main reasons. In Portugal (and most of France) houses are pretty close by and, unless you want your neighbours to see what's going on inside your house (you don't want it), you'll need some form of protection: shutters and curtains.

During the day, when shutters aren't used, windows are protected by a light curtain that allows homeowners to see what's happening outside but doesn't let the others look in. In the evening, when lights are on, people outside can see through the light curtains into the home. Therefore, you either add heavy curtains to the mix or you add shutters.

One thing that I find extremely uncomfortable in 'anglophone' houses as seen in films and TV shows is how vulnerable the homeowners are in terms of privacy. Any curious neighbour will be able to spy them as they go about their private life since the houses in such films / shows never have shutters and rarely have curtains. It's unsettling.

So perhaps keeping the shutters is also in direct relation to how many peeping-Toms a society expects to find amidst one's neighbours.

I live in Pennsylvania in the USA and most old houses I have seen have exterior window shutters.

The advantage of exterior shutters is that while shut they protect the windows from shattering.

The disadvantage of exterior shutters is that you have to go outside to shut the ones on the lower floor and open the upper story windows and reach out - possibly falling to your death - to shut their shutters.

The advantage of interior shutters is that you can shut them easily while safely and comfortably inside - if you don't have stuff in the way.

The disadvantage of interior shutters is that they don't protect the windows from being shattered.

The best form of shutters would be exterior shutters you can shut from inside by turning a crank or pressing a button.

So where are interior shutters common? I believe some were mentioned in a Sherlock Holmes story.

In the Sherlock Holmes story "The Speckled Band" Holmes and Watson examine the Window's at Stoke Morton from the outside and then Holmes tells Miss Stoner:

Now, would you have the kindness to go into your room and bar your shutters?”

Then Holmes reaches through the open window and tries to open the shutters.

This proves that in the late 19th century some English buildings had interior shutters.

In The Fellowship of the Ring, chapter 10, "Strider", in a room at the Prancing Pony Inn at Bree: "He then closed and barred the heavy inside shutters and drew the curtains together."

Not the answer you're looking for? Browse other questions tagged france architecture or ask your own question.

31
Why did the French sell Louisiana?
15
Did the French Revolution help produce French military “elan?”
17
Why did the French nobility adopt Calvinism?
8
Did some Roman/Pompeiian houses have atria for slaves?
8
Why wasn't there French irredentism or pan-fransicm?
12
Why are the ceilings so high in older houses?
5
How were settlers' houses in Kamchatka built?
14
Why did the French Army melt film during WWI?
21
The WWI Christmas truce of 1914 resulted in no consequences, in spite of clear warnings against such beforehand - why were there no courts-martial?
2
What ancient Roman(s) wished houses were made of transparent walls?