How can a diamond shape be a reference to Napoleon?

The green and yellow on the Brazilian flag are references to the Houses of Bragança and Lorraine (of Francis I and II of the House of Habsburg-Lorraine), respectively. It seems that the diamond shape on the flag of the Empire of Brazil — which, like the background green and yellow, still remain in the present flag of the country — is a reference to Napoleon. 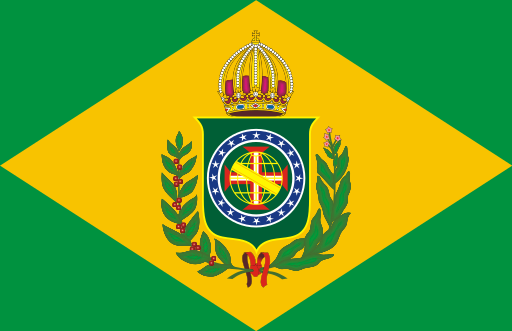 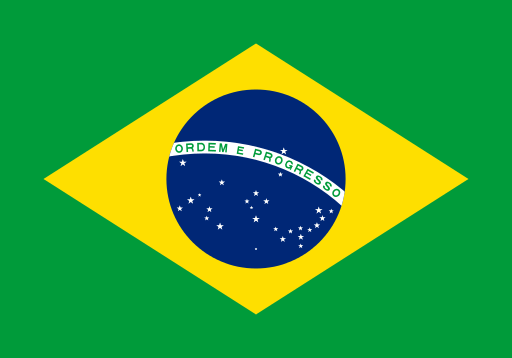 In the book Brasil: Uma Biografia (Brazil, a biography) of Lilia Schwarcz and Heloisa M. Starling, they say that the diamond shape in the flag was a 'stubborn tribute' to Napoleon made by Dom Pedro I of Brazil. The flag was made by Jean-Baptiste Debret, a French artist that worked for Napoleon and went to Brazil after the fall of Napoleon.

Even though the book says the reference was made by the Emperor, by citing the background of the creator of the flag I want to show that this reference isn't far-fetched at all. The tribute to Napoleon in the flag of the Empire was made (probably) because of the relocation of the Portuguese royal family to Brazil, which was caused because Napoleon invaded Portugal. Hence, Napoleon was the reason why Dom Pedro I of Brazil was in Brazil in the first place, having to declare independence. I can't see any other reason for a tribute.

As a curiosity, regarding the independence, Portugal wanted to undermine the political power Brazil got after it was elevated to part of the United Kingdom of Portugal, Brazil and Algarves (rather than a colony of Portugal) and Brazilians didn't accept it so they pressed Dom Pedro I to declare independence, if I'm not wrong, to avoid political instability. Actually if you think about it, it was only because of the monarchy that Brazil stayed together and didn't split into tiny republics, like it was the case with our not-so-tiny neighbours.

A question remains: in what way is a diamond shape a reference to Napoleon?

The flag design most closely associated with Napoleon would be his personal command flag. If he had one.

Pending the discovery of the design of any personal flag of Napoleon, the flag design most associated with him would be the regimental colors carried on the same staffs as the eagles of his regiments.

Thus the 1804 to 1812 pattern was the one with the lozenge and was carried for about eight years, longer than any other pattern associated with Napoleon.

Some flags of Napoleon's Kingdom of Italy also had lozenges.

As you can see, most military colors in that era did NOT use lozenge patterns and it is possible that only France and French client/puppet states used lozenges in their flags.

Thus lozenges in flag patterns did have an association with Napoleon. Perhaps Pedro I thought that as a self made and revolutionary emperor he had something in common with Napoleon.

Napoleon's lozenge military colors were probably inspired by some Revolutionary era colors. I have seen a lozenge in a picture of the color of the 106th regiment of revolutionary France.

Pictures of the fight on the Bridge of Arcola done't agree on the design of the flag. Some show a lozenge design.

If the Brazilian lozenge is based on the Napoleonic lozenge, it may be ultimately based on the design of the colors of one or more Revolutionary French regiments.

The book A História dos Símbolos Nacionais, published by the Brazilian Senate, states that indeed,

[The flag] was conceived by Jean-Baptiste Debret, French painter and founder of our Academy of Fine Arts, inspired by some military flags used in his country at the time of the Great Revolution and the Napoleonic Era, from which he copied the ornamental model in Empire style consisting in a lozenge inscribed into a rectangle. 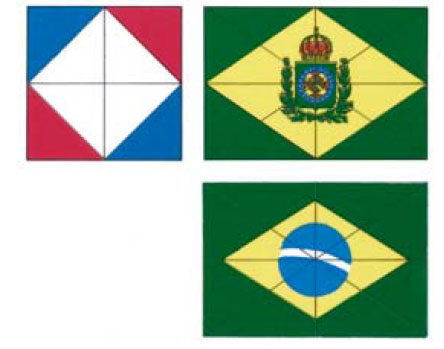 It is interesting to note that according to the book King João VI, Pedro's father, who remained King of Portugal after the independence of Brazil, had already asked Debret to design a flag for an independent Brazil in 1820, and it already included a lozenge on a green field. 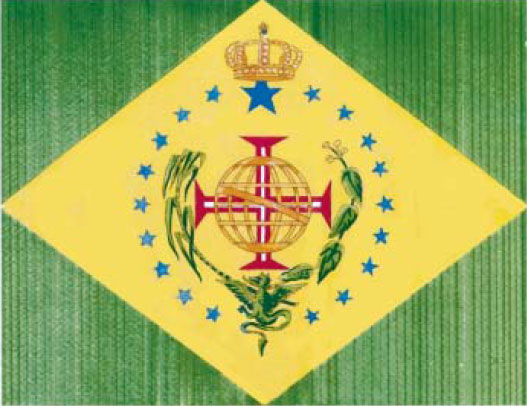 The "tribute" is probably a figure of speech, though, as I do not think the King of the Empire of Brazil Pedro I (who became King of Portugal as Pedro IV) really asked for the flag to be a tribute to Napoleon.

It is evident that the Flag of Brazil, that is, essentially, the same since independence, is an undisputable copy of the Italian Napoleonic kingdoms and republics:

The author of the Brazilian flag was a Frenchman Jean Baptiste Debret who served Napoleon, so the link is reinforced. However, the lozenge, or rhombus of the Brazil and Italian Napoleonic flags are preceded by the Napoleonic Italian Republic that used a square flag with a rhombus/lozenge that is, essentially, a 45º angle square and a copy of the Napoleonic regimental flags that were used by the army since the 1794 reform, before Napoleon (made universal for the whole army in 1803):

But why? It was always my conviction that the common element in all this history was Freemasonry: the founders of Brazil were Freemasons (D. Pedro and José Bonifácio); Napoleon, his older brother Joseph and Beauharnais were Freemasons and were in charge of Napoleonic Italy; the author of the flag was a Freemason; and, recently, the last Italian President approved a new presidential banner that is a copy of the Napoleonic Italian Republic, also a Freemason; is also well known the Freemasonry influence and participation in the French Revolution. Is evident the existence of some kind of connection between the banner and Freemasons; but why? what is the relation between the rhombus/lozenge and Freemasonry? It is not a common, or well-known masonic symbol; it is also well-known that Freemasonry plagiarized several existent symbols: many from Christianity and Jewish Kabbalah.

It is possible that the institution of the lozenge in army banners in 1794 was an aesthetic choice (it would be necessary to read the sessions of the approval of those banners); however, it can't be coincidental the affinity of so many Freemasons with the symbol. A lozenge/rhombus is nothing more than two triangles connected; and I can find 6 reasons for its use by Freemasons:

Is almost impossible to say, for sure, that is a symbol created by Freemasons, but something is undisputable: the connection of the symbol with Revolutionary Principles and Freemasons affinity to the geometric form of the "diamond".

I can not find any personal information, or if was Freemason or not, about the designer of the French Regimental Banners and many Napoleonic flags, but I found it was Jean-Baptiste Challiot de Prusse and designed this:

PS: I reiterate: I can't say for sure that the design is a Freemason design, I only notice that Freemasons like the design. I mention Freemasonry because is a Guild that uses many symbols. However, despite this connection, other can be asserted, the Revolutionary Ideals dispersed throw Europe by Napoleon. And, this website is in English so, some English Freemason that read this may find it strange but, Anglo-Saxon Freemasonry is different of French Freemasonry that spread to Catholic countries. I give an example: despite the British brought Freemasonry to Portugal, and its ideals, soon the Portuguese Freemasons adhered to the French "version" of Freemasonry, that was strongly anti-Catholic, so much so, that General Beresford (British General commanding the Portuguese Army during Napoleonic Wars) condemn to death several Portuguese Freemasons when they adhere to that "French version" and turn on the British.

A new information, recently found: In 1821, in the Constituent Cortes of 1820 (one year before Brazil independance), the congressmen Manuel Gonçalves de Miranda proposed, as the new Portuguese Nacional Colours, the GREEN and YELLOW, but the proposal was dismissed on the grounds that those were masonic colours and the historical Blue and White was chosen instead. I could not find why green and yellow were considered, by the Congress, as "masonic colours", but this was the reason the proposal was dissmissed. This site didn't allow me to post the links with the information.

And after some research (unfortunatlly the site dont allow me to write the links) I found that the Lozenge is the "Jewel" used in the 16th degree, that is connected to the 15th degree of the Scottish Rite, together they form the "Council of the Prince of Jerusalem" and, althought the lozenge is more connected to the 16th degree its used to represent the "Prince of Jerusalem" degrees combined. What was very interesting is the symbolism of these degrees and the context. But the colours also were very interesting: the collar/ribon is green in the 15th and yellow in the 16th, so the aprons according to Hutchens.

Not the answer you're looking for? Browse other questions tagged napoleon flags portuguese-empire brazil or ask your own question.

15
Why did Kabila discard the name and flag of Zaire?
1
How was Napoleon able to take power from the Republic
16
Flag with 13 white stars and a crescent on red background
10
Can anyone explain why the Scottish flag on this map from 1504 has a red cross on a white background?
4
How can a skilled battle commander like Napoleon Bonaparte lose to Prussians at Waterloo (Belgium) as such?
5
Why was Napoleon so lenient to Austria?