Did the ancient Greeks ban the gastraphetes?

From what I remember, Galántai Zoltán once claimed in a lecture (at Budapest University of Technology and Economics) that in ancient Greek times, some people mutually agreed to outlaw the use of the gastraphetes (large crossbow) in wars against each other. According to him, this ranged weapon was very efficient in killing, yet it could be used by soldiers with very little training compared to other similar weapons like bows. It had turned the wars too deadly, which is why such an agreement was made.

What is the truth in this? Was there ever such a treaty? If so, who agreed to it, and when?

There have been bans of missile weapons in the past, but I don't find any indication that there was any particular action against the gastraphetes. 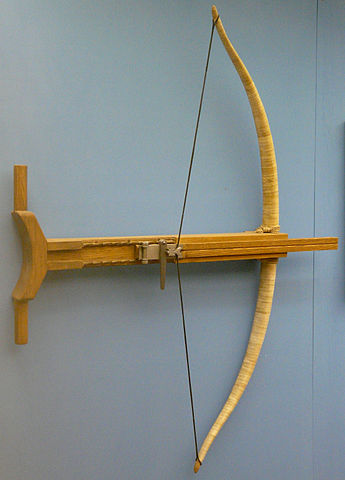 During the the Lelantine War that took place between them it is stated that the two city-states made an agreement banning the use of 'missile weapons'. If this prohibition of a specific type of weapon is true it stands unique and would be the earliest example of arms limitation in history.

The problem with respect to the Gastraphetes is that this ban and war occurred about 300 years before its invention. (Note that this ban, and indeed the entire battle, has been considered by some to be fictional.)

One other ban which did include both bows and crossbows, was enacted during the Second Council of the Lateran,by Pope Innocent II in 1139.

The wounds caused by the crossbow in warfare were however considered so barbarous that its use except against infidels was interdicted by the second Lateran Council in 1139 under penalty of an anathema as a weapon hateful to God and unfit for Christians. This prohibition was confirmed at the close of the same century by Pope Innocent III Conrad III of Germany 1138 152 also forbad the crossbow in his army and kingdom. The employment of crossbowmen nevertheless again became common in English and Continental armies in the reign of Richard II 1189-1199...

Not the answer you're looking for? Browse other questions tagged ancient-greece weapons or ask your own question.