Did the third US atomic bomb disappear without a trace? [closed]

According to some sources I have read, the third atomic bomb constructed by the US "disappeared w/o a trace" from a warship while en route to Tinian in 1946 or -47 (?).

This was duly corroborated by vice admiral Allis Zacharias, a member of the US Naval Secret Service. As late as early 1948 the US did not possess another bomb.

Is this true or false?

As for the US not having a third nuclear bomb until 1948, this is totally incorrect because the US conducted Operation Crossroads at Bikini Atoll in mid 1946, which involved detonating two nuclear devices.

They were the first nuclear weapon tests since Trinity in July 1945, and the first detonations of nuclear devices since the atomic bombing of Nagasaki on August 9, 1945. The purpose of the tests was to investigate the effect of nuclear weapons on warships.

More information from the Smithsonian Institution about the tests.

First, I believe the OP is referring to a fourth atomic bomb. There were three constructed and used during the war, though one was a test rig.

Each bomb has a core of fissile material. If you're keeping track, that's two plutonium cores and one uranium core used in WWII. There were no more bombs completed during WWII, but the parts were including more plutonium cores. The most famous of these is the Demon Core.

Since this was the third plutonium core produced, and its fate was uncertain until very recently, I believe this might be the nugget of the claim of a "missing third bomb".

Officially the Demon Core was HS-5,6;R-2 (plutonium-gallium hemispheres 5 & 6, plus a ring to separate them) and was being tested for use. HS-1,2 were used in Trinity, no ring. HS-3,4;R-1 were used in Fat Man. HS-7;R4 was being prepared (the records don't mention HS-8). So this was the third plutonium core produced.

It had originally been made in anticipation of needing to drop more bombs on Japan, but Truman put a halt to that, and shortly after Japan surrendered. Los Alamos had the parts of a third bomb ready to go, but it was never shipped during the war. They used the core for testing and it was involved in two major accidents that killed two scientists.

On August 21, 1945, Harry Daghlian was conducting experiments with the cores just below critical mass. He slipped and dropped a brick of tungsten carbide into the test assembly making the core briefly super-critical. He quickly pulled the brick away with his bare hand but had already received a lethal dose. He died 25 days later.

The super-critical event would make the core too radioactive for use for some time.

On May 21, 1946, Louis Slotin was again experimenting with the same core by hand. He had lowered the two halves of the core together separated by a screwdriver preventing them from going critical. He could adjust the separation by changing the angle of the screwdriver by hand, a procedure aptly known as "tickling the dragon's tail". 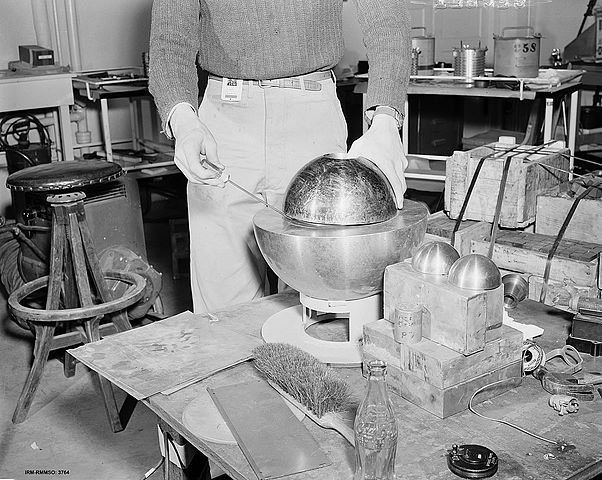 (A reconstruction of Slotin's fatal experiment. No, really! Bare hands and all.)

He slipped and the cores briefly went super-critical before he pulled them apart. Slotin received a lethal dose of radiation and died 9 days later.

The core was intended to be used at the third test, Charlie, of Operation Crossroads, but again time was needed for its radioactivity to decline after the criticality accident. Charlie test was scheduled for March 1st, 1947, but was cancelled after Baker (the second test) was unexpectedly radioactive and the test site could not be cleaned up in time.

It was not known what became of the Demon Core, the early US nuclear program was very sketchy. Finally in 2016 interviews and searches of the archives revealed the Demon Core was ultimately melted down and reused for another core.

This story likely originates in a confused and sensationalised account of the fate of the USS Indianapolis (CA-35). This ship delivered some of the parts of Little Boy to Tinian, and was sunk four days later, on 30th July 1945, by a Japanese submarine.

Owing to a series of mistakes, nobody took any notice of the ship's failure to arrive at its destination, and the survivors of the sinking were not rescued for four days, by which time the majority had died.

Addendum: An additional Fat Man device would have been ready on August 19th 1945, but General Groves, the military head of the Manhattan Project ordered that its core should not be shipped to Tinian.

34
Did Heisenberg undermine the German atomic bomb by deliberately hiding his expertise from the Nazis?
33
Did the United States have a third atomic bomb to drop on Japan?
1
End of WWII: potential U.S. atomic bomb production rate
3
Who made these comments relating to the use of the atomic bomb?
32
What was the plan for an abort of the Enola Gay's mission to drop the atomic bomb?