Was there a serious effort by the Muslims of East Africa to spread Islam into the Central Regions of Africa?

Was there a serious effort by the Muslims of East Africa to spread Islam into the Central Regions of Africa (Congo, Uganda, Zambia, etc)? Or was their primary interest in Central Africa nothing more than just an area to make slave raids?

During the nineteenth century, the Zanzibar Sultunate was gradually extending its reach into the interior, mainly via the Congo River. This process might have continued if it were not constrained by British and German interference.

TL;DR Yes, there was. With the advancement of trade, Islam communities emerged in the Central Regions of Africa. However, the serious efforts started just before the Colonial Period where Islam expansion was stopped, principaly because the Muslims lost both the political and trade influence

I will expand furthermore in @Brian Z answer. As he said the Zanzibar Sultanate was expanding across the trade routes across the rivers in the heart of africa. With the trade, Islam spread both in the form of convert and of "colonial agents". In that extent that when Europeans started to make contact with zone they were bemused to find Arabs discussing Napoleon's wars, Turkey's government, and Manchester's cotton"(Fisher,2008)

Being more precise, there was intent to create a state in the interest of Zanzibar in the Congo Basin. In 1989, Tippu Tib, founded the Congo Free State(with some kind of support[indirect rule] of the Sulaltanate). However the luck of the shortlived State was decided after being torn down by the Belgium and British Colonist. However, Fisher allow himself to conjeturate in which extent the cultural landscape of the zone with a little more of time in his hands.

Likewise, in Uganda, in 1832 Kabaka Suna opened formally the kingdom to foreign trade, therefore trades bringing islamic practices from the usual suspects, principally Zanzibar and the Golden Horn states. However, shortly before his death he expelled the Arabs(the drivers of the missionary campaigns). In the following decades, with the strengthening of the trade, more and more people(specially not Arabs) joining the Islamic Community, reaching one point where the ruler was ambigously. Why Uganda is Christian today, then? Well, circa 1870 Christian missionaries started to work on Uganda (like European Trade), converting as well a good chunk of people. The worked together to oust pagan leaders, but in 1880s it leaded to two civil wars where the Christians won the upper hand of the war, short before the start of the colonial period. Still, there is a sizable quantity of muslims in Uganda, where Idi Amin is probably the most famous one outside Uganda.

If you look at the relief map of the continent, East and Cenral Africa are separated by the East African Rift. The Zanzibaris came from current-day Oman by sea, and Somalis in current-day Somalia, Ethiopia and Kenya accepted Islam because the Horn of Africa is closed to the Arabian Peninsular, the cradle of Islam, and Islam is probably spread through the narrow Red Sea or though the Sahara Desert. Compared to those East African examples, Central Africa is more difficult for East African Muslims to reach before planes were invented. 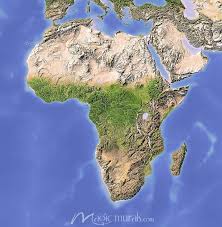 Off topic: In fact Central Africa was so difficult to reach, even Germans with advanced maritime technologies didn't know what's in it. See the Caprivi Strip

Not the answer you're looking for? Browse other questions tagged islam congo or ask your own question.

37
What was the religion of the Arabic people before conversion to Islam?
16
Was Islam really responsible for the Italian Renaissance?
34
What disruptions were brought about by Islam that the Arabians saw so many victories?
0
Is the enforcement of Hijab wearing for Muslim women a recent occurrence?
14
Was there a rule against non-Muslims wearing the colour green in the Ottoman empire?
26
Are there records of US slaves who practiced Islam following their import from Africa?
6
What was the world's largest religion in 1500?
13
What was the status of Shia Muslims in the Ottoman empire?