Were Archimedes screws used in pre-modern times in the far east?

Screw pumps or Archimedes screws were used by the Romans in mine dewatering. They were possibly used in ancient Babylon (a few hundred years before Archimedes) to irrigate the famous hanging gardens.

Do we have any account of screw pumps being used in the far east (what's today China, Japan, Korea, etc.) or India, during antiquity or the middle ages?

Evidence of the Archimedes screw pump being used in Japan first appears in 1618, though the idea of a screw had been introduced around the middle of the previous century. In China, it is mentioned in books from the 1620s.

Note: The Japanese medieval period is given as 1185 to the mid 16th century by the 'Cambridge History of Japan' but up to 1603 by Wikipedia. For China, the terms 'medieval' and 'middle ages' are not typically used: those who do have imposed various end dates.

The earliest mention of any kind of screw in Japan would appear to be 1544:

On another ship from China, arriving in 1544, was a Portuguese blacksmith who taught Yaita how to apply a screw at the bottom end of the barrel. With this screw in place, the risk of explosion was eliminated.

For the Archimedes screw pump, the earliest mention and use I've found is 1618 where it was used in the Sado gold and silver mines to deal with flooding:

The Archimedes screw pump (suijorin...) was first introduced in 1618, in an effort to tackle the perennial problem of flooding, and this heralded Sado's most productive period.

The Archimedes screw was also widely used on Sado from the mid seventeenth century... 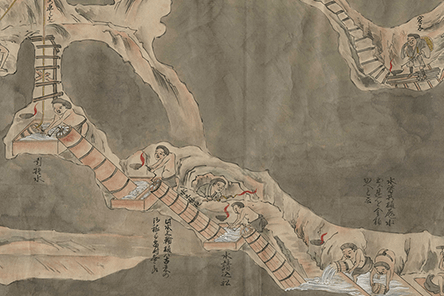 It is also mentioned in the text of this British Library article:

Where no running water was available a pit was dug on the beach and filled with water. An Archimedes screw is shown drawing the water up out of the pit to form a flow that could be used for sluicing.

(All quoted text below is from Archimedean Mechanical Knowledge in 17th Century China by Zhang Baichun and Tian Miao, in The Genius of Archimedes – 23 Centuries of Influence on Mathematics, Science and Engineering)

The above refers to the work Taixi Shuifa (Hydraulic Methods of the Great West, Hydraulic Methods). Sabatino de Ursis (1575–1620) was an Italian Jesuit who worked with the Chinese scholar Xu Guangqi to translate western texts into Chinese. This work "depicted some water-lifting devices such as Archimedean screw". In the book,

Xu Guangqi, the Chinese partner in translation of the book vividly named it [water-screw] longwei che (vehicle with the shape as dragon’s tail)

The book also has an illustration of a water-screw. Then,

In 1623, Italian missionary Giulio Aleni (1582–1649), assisted by Chinese scholar Yang Tingjun, compiled Zhifang Wai Ji (Areas Outside the Concern of the Chinese Imperial Geographer, ZFWJ),...In which Archimedes and his inventions were mentioned...

It was also mentioned in Diagrams and explanations of the wonderful machines of the Far West (Yuǎnxī qíqì túshuō lùzuì), printed in 1627:

The third chapter...illustrates, and shortly describes,...cranes, mills, water-pumps, the Archimedean screw and (for the literati!) a revolving bookcase.

Source: Peter M. Engelfriet, 'Euclid in China: The Genesis of the First Chinese Translation of Euclid's Elements, Books I-VI (Jihe Yuanben, Beijing, 1607) and Its Reception Up to 1723' (1998)

However, these tomes do not appear to have been widely available and the Archimedes water-screw mostly remained in books. There are a few examples, though, of manufacture and practical usage:

There were some accounts of manufacturing and use of the waterscrew in 18th and 19th centuries. Xu Chaojun...had a good grasp of astronomy and clockmaking. A book, which printed before 1911, told us that he constructed a water-screw that could be driven by a child to irrigate crop in 1809.

Qi Yanhuai (1774–1841), who first held office as a county magistrate in Jinkui and afterwards as a prefect in Suzhou, also made a water-screw and a pump

Mostly, though, it was found to be impractical and expensive:

For craftsmen and farmers, the construction and using of water-screw also bring some inconvenience. Qian Yong told us a short story. A waterscrew was made in Suzhou in 18th century. It may irrigate cropland of thirty or forty mu (a traditional unit of area) every day. However, its very expensive in construction. And if it was damaged, it could not be repaired and be used again. A majority of farmers was so poor that they were not able to make it...

...Archimedean mechanical knowledge exerted a limited influence on China in 17th century. It had partly been studied and practiced by Chinese by the mid-19th century.

References to Archimedes in Korea before the 20th century are few and far between.

though many Joseon scholars were fascinated by the enlightened ideas of the West, none of the theoretical designs were actually used to construct real waterwheels.

It is possible that some among the Korean elite were familiar with Chinese works which mentioned the Archimedes water-screw. The Korean scholar Choe Han-gi, in his 1867 book Seonggi unhwa, mentions several "contributions to physics" credited to Archimedes but not the water-screw.

As far as Japan is concerned, in terms of "pre-modern times", it is yes or no (It depends what age you would mean by that).

An article about Tsushima Ginzan (silver mine located in the island in the sea between today's Korea and Japan) around the 7th century says,

These days mine roads were about 1,500m, and laborers were divided into digging teams, lightening team, and conveying team. And the pumping out of water from the mine was done by 300-400 men's hands directly.

So the oldest chronicle in the 7th century is describing the pumping out of the water was not done by any kind of pumps but rather by the wooden buckets by many men.

It was 1637, when this Archimedecean screw was introduced into Japan for mining.

In Japan, it started to be used for pumping out the water from mines. In Sado Kinzan, or Sado mine, the Arichmedecean screw was called as Su-I-Jo-Wa or Ryuu-hi, a blind man named Soho-Suigaku in Osaka introduced it for Sado mining. It was the most effective device to pump out the water at the time.

The image of the Japanese Archimedecean screw was like this. 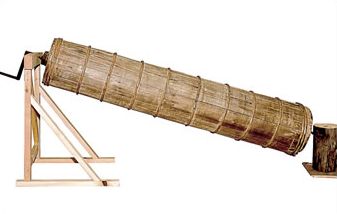 According to this page,

It was in 1637, when this Archimecean screw was introduced through China for Sado mine, and then the use of it expanded to agriculture.

So it seems China introduced this device like Japan around 15th-17th century.

Maybe not. This article makes no mention of archimedes pumps in the far east:
Evolution of Water Lifting Devices (Pumps) over the Centuries Worldwide

They also treat china and quote old (but not ancient) chinese technical manuals.

Not the answer you're looking for? Browse other questions tagged middle-ages technology asia or ask your own question.

10
Was there any way to deal with infections in pre-modern times?
6
What were the effects of US foreign policy in the South East Asian region in the 1950s, 1960s and 1970s on states with capitalist economies?
5
Was it not possible to exploit the gaps between each pre-modern melee formation?
8
What were the required conditions to be accepted by a university in Medieval times?
6
How heavy were the heaviest war hammers actually used?
2
Please post a picture of the mills tonfa were supposedly used to turn
3
What techniques were used to make rings in medieval times?
3
Were man catchers actually used in medieval times?
75
What drugs were used in England during the High Middle Ages?
3
How were British monarchs educated about military strategy in the Middle Ages and early modern period?