What numerals did the people of Ireland use before Roman Numerals? (aka, did Ogham include numbers?)

I would like to know if any writing system of Ireland had a system of writing numerals prior to the Romans introducing Roman numerals. There are lots of sites online that show the Ogham writing system broken down into letters. But no one ever explains how to write numbers. Did they simply spell out the letters for the number (i.e. write out A-O-N for "aon" for the number 1)? Or was there some other system?

No, Ireland had no written form of numerals until the adoption of Roman numerals.

The Ogam alphabet exhibits no numerals at all, from the earliest sources the alphabet only has 20 letters, with five Forfeda 'additions' at a later point in the medieval era. The alphabet is actually far more diverse than it is often given credit for, with the In Lebor Ogaim (one of our primary medieval sources on Ogham) giving us about 100 different ways of writing Ogham.

Browse the Ogham in 3D Corpus, you won't find any with numerals.

It's also questionable whether Ogham passes your requirement of 'a system of writing numerals prior to the Romans introducing Roman numeralst', with most scholars believing that Ogam was originally based on another script (5) in the 4th century(-ish), and the most common suggestion is that this 'original' is the Latin alphabet. This wouldn't be surprising as a vast number of Ogham inscriptions actually come from Western Britain, where Irish migrants would be able to become literate in Latin and develop their own system of writing.

As for the alphabet in @EvanM 's answer ... that suggestion could not be more categorically false, they quote from the 1862 and 1874 (2 volume) text Barddas. A romanticist and nationalist treatise on Welsh 'bardic' and 'druidic theology' and 'lore' written by the infamous literary forger Iolo Morganwg.

... he was regarded as the leading expert on ancient and medieval Welsh life. It was only after his death on 18 December 1826 that the truth was finally revealed - Iolo had forged many, if not most, of his manuscripts and ancient documents. (1)

To provide some more context to the man, Celtic Romanticism had begun to flourish in Britain from the 17th to 18th centuries, many of its participants were fascinated with the idea of Druids, they mixed new ideas about religion with their conservative Christian beliefs. Iolo Morganwg otherwise known by his birth name Edward Williams was born in the centre of this, and as a fervent Welsh nationalist became a major figure in the Celtic Revival. His Barddas and his activism largely helped start the modern movement of Neo-Druidism, and his writings make up a large part of its theology to this day.

You may recognise the now famous Awen symbol 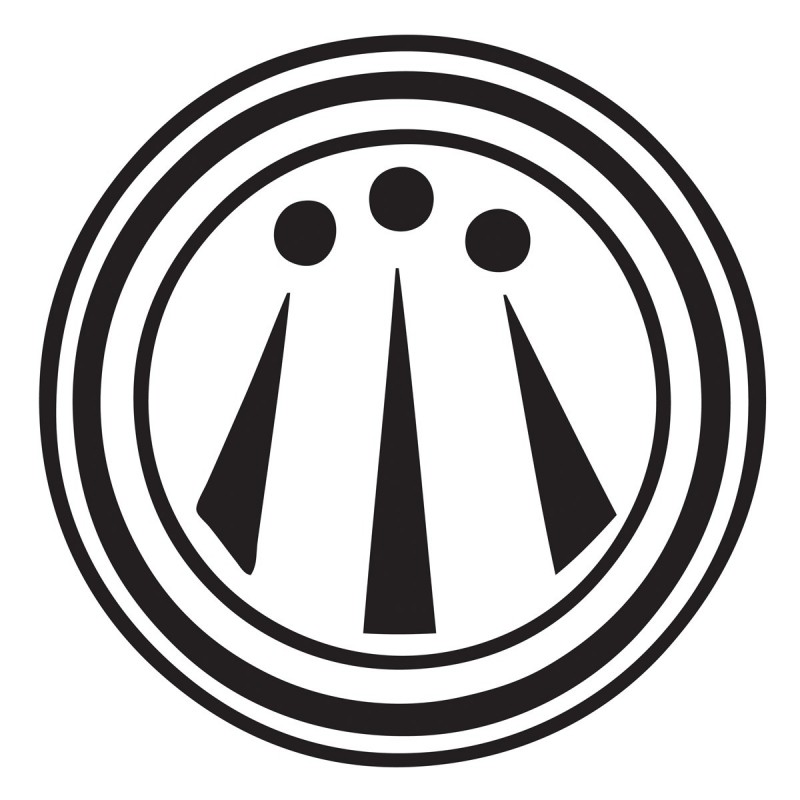 This symbol was invented by Iolo in his Barddas with the lines:

And the mode in which it was spoken was of God's direction. His name was pronounced, and with the utterance was the springing of light and vitality, and man, and every other living thing; that is to say, each and all sprang together. And Menw 1 the Aged, son of Menwyd, 1 beheld the springing of the light, and its form and appearance, not otherwise than thus, in three columns; (2)

As for the rest of the alphabet, the Coelbren y Beirdd (English: "Bards' alphabet") as he dubs it is explained as follows:

Einigain, Einigair, or Einiger, the Giant, was the first that made a letter to be a sign of the first vocalization that was ever heard, namely, the Name of God. (2)

Einigan the Giant, 1 or, as he is also called, Einiget the Giant; that is, he took the three rays of light, which were used as a symbol by Menw, son of the Three Shouts, and employed them as the agents and instruments of speech, namely the three instruments B. G. D. and what are embosomed in them, the three being respectively invested with three agencies. Of the divisions and subdivisions he made four signs of place and voice, that the instruments might have room to utter their powers, and to exhibit their agencies. Hence were obtained thirteen letters, which were cut in form on wood and stone (2)

And goes onto provide the full alphabet, including numerals, as @EvanM has shown.

I cannot emphasise enough, apart from some character names, which he lifts from earlier Welsh literature, none of this exists in any form, literary or archaeological, before Iolo Morganwg, this alphabet is purely of his imagination.

To this day, Iolo Morganwg is a massively controversial figure in Britain. As an example, in 2010 the Royal Parks authority placed a memorial to the man in upmarket Primrose Hill, north-west of London where he held the first ever Gorsedd (3). This was met by:

Members of the 1,200-strong Friends of Regent’s Park and Primrose Hill branded Iolo Morganwg “a bloody criminal” when the plaque marking the site of the first meeting of the Bards in 1792 was unveiled last summer. (4)

In a stinging editorial in their quarterly magazine, entitled “Iolo – Who He?”, chairman Malcolm Kafetz stormed that medieval documents and poems Morganwg claimed to have discovered were later shown to be forgeries.Mr Kafetz railed: “This chap was bankrupt and a forger. A bloody criminal. This plaque has just appeared out of nowhere. It is a diabolical cheek.“The man in question, Edward Williams – otherwise known as Iolo Morganwg – had an extraordinary and interesting, but not necessarily praiseworthy life.“He had a bookshop, wrote poems and folk songs and discovered a series of influential medieval chronicles, and it was only after some 100 years that these were discovered to be forgeries. (4)

I found this for you:

It goes on to say how you can add these symbols together to get 100's and thousands. Just search for the title "THE THREE SYMBOLS OF SCIENCES" in the link below and you will find the section.

EDIT: I found this book after digging deeper based on the comments I have found support that the early Celts used hash marks to count and not what we would call numbers. So far that is all I have found.

Looking at ogham, it looks a great deal more like Roman numerals or Peru khipu accounting than it does like language. And there is all kinds of nonsense going on with our timeline, which would probably be why they insist that ogham can't be numbers. While I'm good at analyzing concepts and information, I can't say I'm a programmer, and I think that's the kind of intellect one would need to figure out exactly what is going on with these patterns.

Not the answer you're looking for? Browse other questions tagged ireland writing or ask your own question.

24
What is the earliest evidence of contact between Ireland and Egypt?
10
Why did the Protestants in Ireland in the 1800s not want Home Rule?
8
What calendar was used by the kingdom of Ireland?
13
Did the biblical apostle James visit Ireland?
5
Why does Northern Ireland not include the counties Donegal, Monaghan and Cavan?
2
What is the labelling system for artefacts?
15
What did parchment and papyrus cost in the Roman Empire?
26
When did the round house fall out of vernacular use throughout Britain and Ireland?
4
What was the likely death toll of the Tudor invasion of ireland?
2
Were there clay printing presses in the bronze age?