How were dagger axes used in battle?

During the Chinese warring states, weapons knowns as dagger axes were used and there is a wide body of evidence that those were common at one time -- so so I believe. Is there any record of fighting manual or techniques using those weapons? Has any one in modern times tried to reverse engineer how units of combatants might have used them? 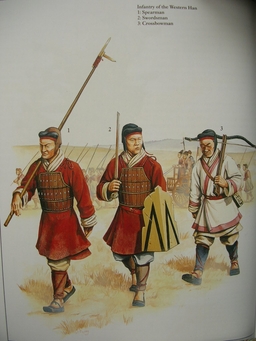 A possible description of the one depicted in your picture (source):

The most popular continued to be the strange dagger-axe. Dagger-axes came in various lengths from 9–18 ft and were now used as thrusting spears with a slashing blade available if needed. The Qin particularly seemed to like the Dagger-axe, creating an eighteen foot long pike version.

This forum has an excellent discussion (and has a larger version of the picture you posted). To pull out some points from that:

There's a National geographic documentary with good visuals of how it's used in battle:

I personally consider it one of the most underrated weapons in history.

Not the answer you're looking for? Browse other questions tagged weapons china or ask your own question.

9
Did archers lay on their back to draw bows?
15
What is known about how many Ulfberht swords exist?
6
Where and when were air guns used in a major battle?
11
Why were swords used in battle?
18
Language used on a dagger hilt, supposedly of Persian provenance, ca. 1700-1750
4
Did the United States taxpayer fund the development of China's backbone fighter plane?
4
Why did China begin persecuting Falun Gong after tolerating the movement for nearly a decade?
7
What weapon systems have come and gone very quickly?