Could China be considered a 3rd side during World War 2?

I mean that China was attacked by Japan, yet they held no well-known contributions to the allies. So could they have been a third side?

Not really. They were busy with Japan, and with the Chinese Communist forces, which is why they didn't do much outside of their own territory (they supplied significant forces for the Burma Campaign). In the same way, USSR operations were confined to their own territory for a large part of the war. But in both cases, the Chinese and the USSR kept most of the Japanese and German armies, respectively, busy, making Allied operations in the Pacific and European theatres far easier.

The Chinese did have representatives from the other Allied powers, and some effort was put into trying to get arms and supplies to China, so that they could use their vast supplies of manpower effectively. The Burma Road was built for that purpose, but was not successful because the Japanese invaded Burma to block it.

The USAAF ran a large airlift operation from India to China during 1942-45 which did get supplies through, but a decent road or railway line would have been much more cost-effective. The experience of this operation was helpful in the Berlin Airlift, which was run by the same officer.

The USAAF also planned to operate its B-29s from Chinese territory, but supplying them by air from India just wasn't practical, and little was accomplished until they were moved to bases in the Marianas islands, newly captured from the Japanese. Their operations from there were far more successful, because they could be supplied by ship.

You might well consider the Chinese Communists a third side in the Chinese theatre of WWII. After the breakdown of their united front with the Chinese government in 1941, the two Chinese sides fought each other covertly. The Communists certainly didn't side with the Japanese, and occasionally co-operated with other Allied powers. They agreed to assist US airmen operating against the Japanese who ended up in territory they controlled, for example.

No!
The US saw involvement with the Chinese war effort as very much part of their overall war effort. Ref (2) below is a US Army military history brochure which portrays the Chinese activities as a US campaign. (Probably even more than it was). By keeping China in the war, in the order of 1 million Japanese troops were kept occupied and were thus not available for use elsewhere. This was probably around 20% of total Japanese military manpower.

More could be said, but I think this demonstrates the integral part of the Chinese war effort in WW2 as a whole.

(2) US Army Centre of Military History brochure showing clearly whose campaign they think it was ! :-) - China Defensive - The U.S. Army Campaigns of World War II

Supplies sent by Burma Road in 1 year - May 1941 - April 1942.
110,864 tons (so precise :-)) or about 300 tons per day.
About 60% of what was achieved by air per day subsequently.
Major impediments, in addition to the road itself, were Burmese customes procedures (somewhat surprisingly), and a very steep in-Burma railway section that required the use of "mountain railway" engines and small load sizes. 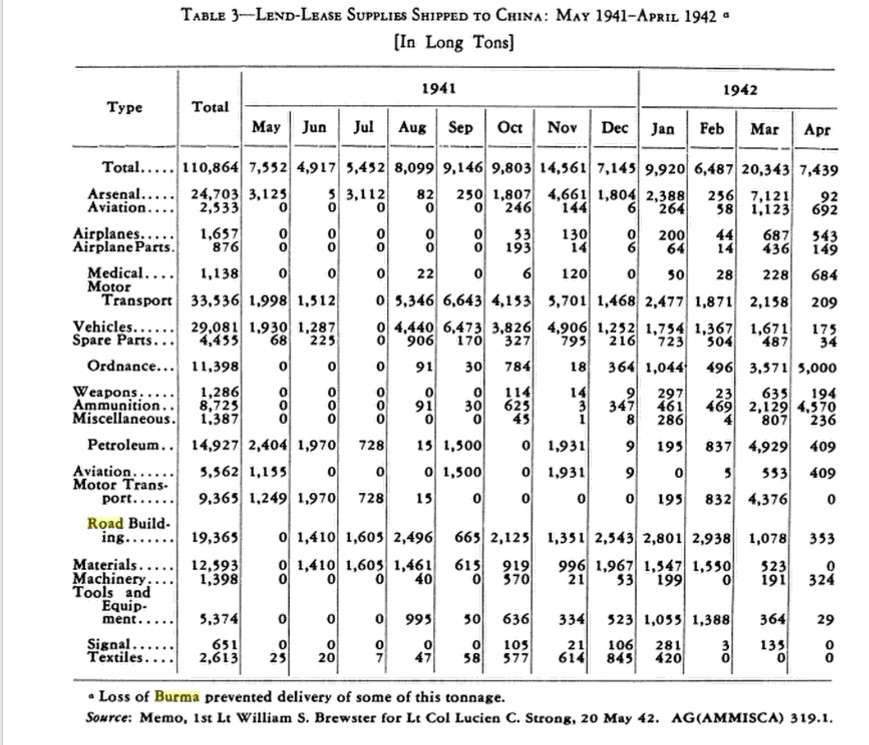 A section of the Burma Road [!!!!]
A degree of dedication by the Allies in maintaining supplies is indicated. 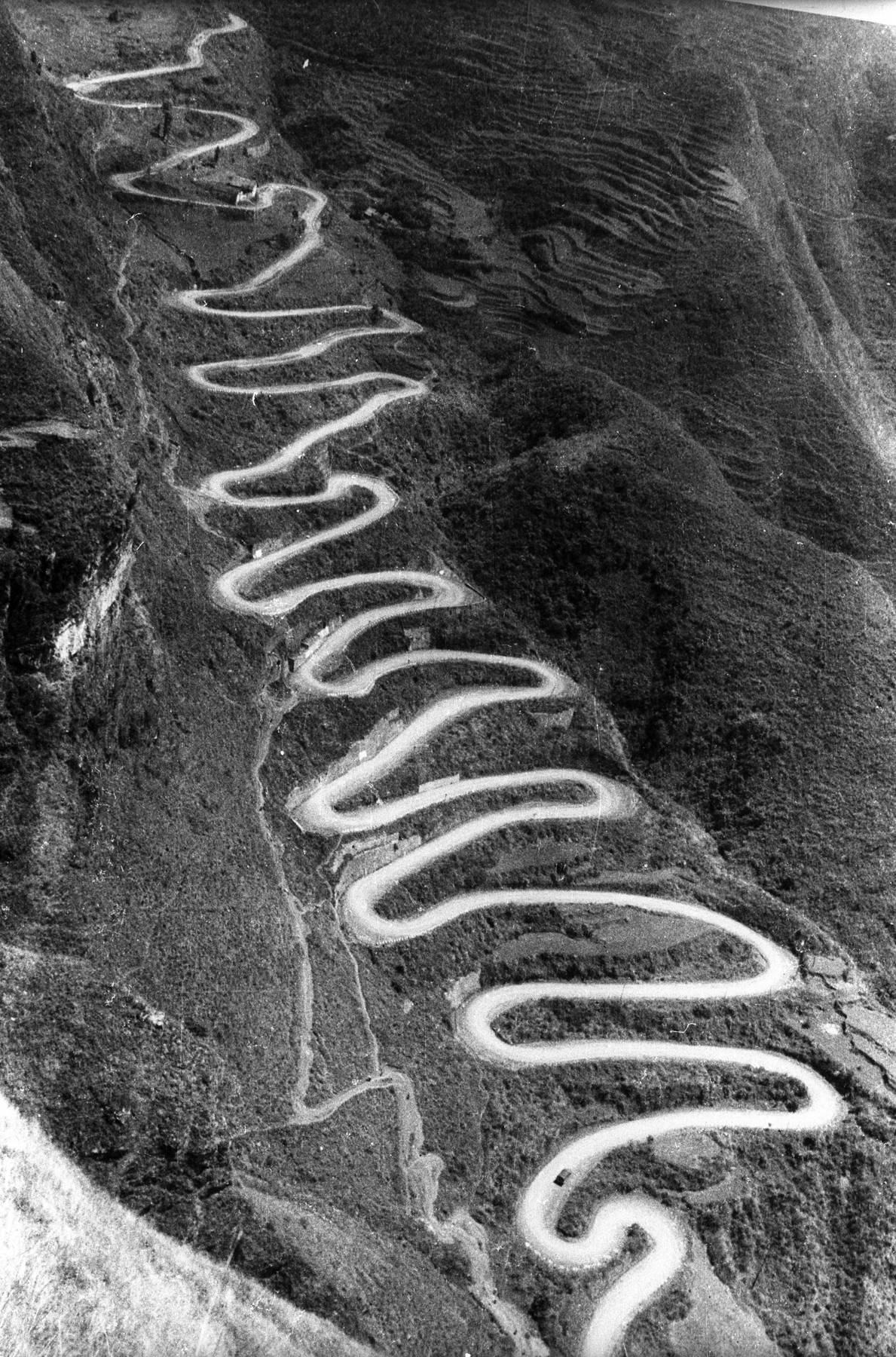 China was a "Big Four" nation in World War II, as defined (principally) by America's Franklin Delano Roosevelt, that signed the Atlantic Charter with 22 smaller nations that later became the "United Nations" (Allies).

To characterize China as a "third side" would mean that China was in a three way war, fighting both Japan and the Allies at the same time. In World War II, that simply wasn't true.

China's accomplishments were not as well known as those in Europe of the South Pacific because it was landlocked and isolated during the war, and far from "news" centers. Nevertheless, something like one third of the Japanese army was tied up in China and Manchuria, (one third on the home islands), leaving the Americans and British to face only one-third in the South Pacific, Southeast Asia, and India. In fact, China's best divisions provided valuable "cover" to the British forces in their retreat from Burma to India in 1942, and in the subsequent reconquest of Burma.

Russia was on the side of Germany until Hitler invaded them in 1941.
(Would you consider Russia to be its own side?)

The US was neutral until Japan attacked Pearl Harbor…
(Would that make America another co-belligerent?)

The coordination among the allies was one of the key reasons the allies ultimately won.

General Stilwell of the United States commanded tens of thousands of Chinese troops in the China-Burma-India (CBI) theater against the empire of Japan.

General Chennault led thousands of American airmen and crew in China (backed by Chinese ground personnel), first as the Flying Tiger, later as the 14th Air Force. They played a key role in the air war against Japan.

The Doolittle raid was only possible, because the bombers ended up landing in China…

Another thing to notice is, China was ultimately a massive winner of WWII.

Being part of the Big Four got China a seat at the high table, which sets China up very well for its current position on the world stage. If nothing else, the diplomatic currency of a permanent security council member can't be understated. Who doesn't want a staunch permanent council member as an ally? (A friend who can block any UN action against you... is a powerful friend indeed... )

Not the answer you're looking for? Browse other questions tagged world-war-two china or ask your own question.

35
Why could China keep most of the lands it conquered after 17th century but European powers could not?
11
Did Spain and the Republic of China (Kuomintang) have diplomatic relations between 1931 and 1939? Were they friendly or unfriendly?
3
Was There a Specified Period Between Declaring War and Attacking Before World War II?
4
What was the nature of the Japanese presence in China in the later stages of World War II?
4
How useful were Chinese contributions to the defeat of Japan in WWII?
6
Did the Axis engage in trade with other countries during the war?
6
Did the US manage to eavesdrop on KMT communications during World War 2?
3
Why was America much better prepared earlier in World War II in the air than in other respects?