How cheap were sailing ships in Gold Rush California?

Many ships were abandoned in San Francisco during the California Gold Rush as their crews and passengers headed straight for the gold areas. Some became semi-permanent buildings and some became landfill. Their local value was less than their value in other ports, presumably because of the lack of available labor to sail anywhere else. This would have been terrible for the sellers of ships, and great for anyone interested in buying ships.

During this period, how much did the price of sailing ships drop in San Francisco? 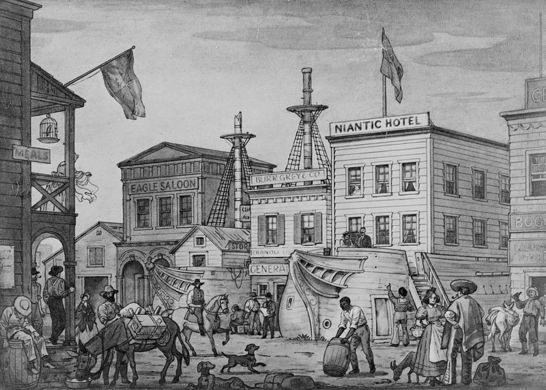 Two ships, the Inez and Bethel were purchased together at San Francisco for the modest total sum of $450. By comparison the price of passage on a ship to San Francisco from New York around that time could be in the range of $100-$300 per ticket.

To put this in context, a story from KQED radio outlines several historical reasons for the practice of abandoning ships amid the Gold Rush.

Not the answer you're looking for? Browse other questions tagged 19th-century economy transportation california age-of-sail or ask your own question.

4
Did anyone find gold in California before 1848?
7
Why didn't Native Americans have big sailing ships?
12
What plumbing did well-equipped sailing ships have?
8
Were there any Russians in the 1849 Gold Rush?
5
Who cataloged the ships that visited Alta California?
2
Who was the Gold Rush memoirist James G. Ward?
6
Why did sailing ships so often employ Chinese cooks?
11
Are there any examples of California gold rush prospectors becoming exceedingly wealthy due to their claim(s)?
2
Were there any watermills within sailing distance of the sea?