Who was the first to accuse enemy troops of impaling babies, cutting fetuses from women's bellies, etc.?

In a surprising number of conflicts, propagandists have accused enemy troops of very similar (and appalling) atrocities. Among the most common allegations are claims that babies had been impaled on swords, spears, pikes, or bayonets, and that fetuses had been sliced from the bellies of pregnant women.

Some examples of groups being accused of these activities throughout history:

Irish Catholic forces in the Rebellion of 1641: 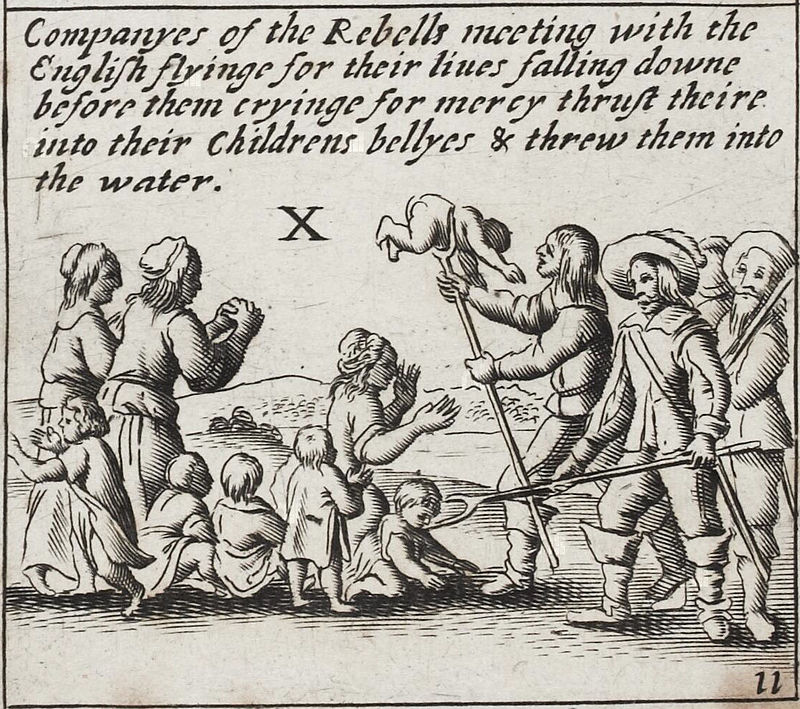 The Irish rebels were also accused of cutting fetuses from women's bodies, as a modern historian says here:

One of the iconic narratives that comes up in hearsay evidence is reports of atrocities against pregnant women who were said to have been ripped open, had their babies pulled out and beaten against rocks.
- Source

Ottoman Turk troops in Bulgaria in 1876:

The number of children killed in these massacres is something enormous. They were often spitted on bayonets, and we have several stories from eye—witnesses who saw little babes carried about the streets, both here and at Otluk—kui, on the point of bayonets... Here in Batak the Bashi—Bazouks... ripped open pregnant women, and killed the unborn infants.
- Source

German troops in Belgium at the beginning of World War I: 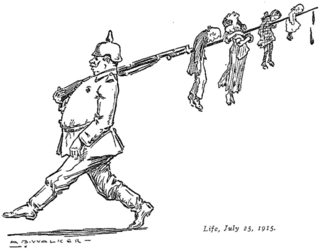 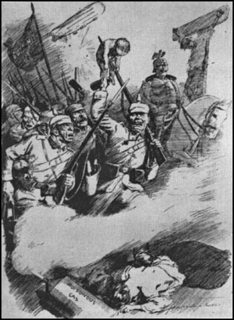 Again, the allegations of bayoneted babies was accompanied by claims of pregnant women being cut open and their fetuses removed:

The Bavarians came into the village of Nomery, after chasing the French and the inhabitants away, they abducted a young pregnant woman, opened her belly and threw the child on the dung heap; since the mother was still living, they finished her off.
- Source

I've found many other instances of atrocity propaganda making these claims, but the examples above are sufficient to illustrate what I'm talking about.

As far as I've been able to determine, none of the accusations above are considered to be accurate by modern scholars.

What is our earliest record of propaganda mentioning enemy forces impaling infants and cutting fetuses from women's wombs?

One early (medieval) example is in Historia Anglorum by Henry of Huntington:

Scots: "cleft open pregnant women, and took out the unborn babes; they tossed children upon the spear-points, and beheaded priests on altars: they cut the head of crucifixes, and placed them on the trunks of the slain; and placed the heads of the dead upon the crucifixes. Thus wherever the Scots arrived, all was full of horror and full of savagery."

He wrote in the end of 11th century. Since then such accusations are often almost literally repeated.

In the earlier times, in Antiquity, when writers mentioned atrocities, they usually did not emphasize babies and pregnant women (except in the Bible). It is much more common to read that just all inhabitants, sometimes including animals, were slaughtered. It seems that people cared less about babies and women.

So it is possible that the idea comes from the Bible, and then spread together with Christianity and Islam. Can anyone find this kind of story in pagan writers?

EDIT. Here is a much earlier example:

"in their barbaric frenzy they even snatched children from their mother's breasts and dashed the guiltless infants to the ground. They held others by the feet,upside down, and cut them in two."

This is Victor of Vita, 429 a.d., describing Vandals invasion of Africa. Christian writer, of course.

Long story short: Most such stories are exaggerated or pure fiction. But some are true, and such practices no doubt go back before the beginning of the species Homo sapiens.

The first known bayonets were used about 1600. That martinet, General Jean Martinet (killed 1672), introduced bayonets to the French army and they were used in most European armies by the 1660s.

Nobody knows when spears were first invented or which species first invented them. Early primates may have observed proboscideans using their tusks to spear enemies and copied them.

Homo sapiens began to make spears with stone spearheads about 200,000 BC.

Both chimps and orangutans have been observed spearing prey with modified tree branches.

Thus I expect that allegations, both true and false, that people have impaled babies on spears go back to the invention of speech complex enough to express that idea.

As for cutting pregnant [w]omen open, no doubt people began slashing other people open with stone knives if they were sharp enough, or with metal daggers and swords as soon as they [w]ere invented. Thus stories about pregnant women being cut open and their babies removed no doubt go back a long, long time.

Long ago I read an article by Mark Twain in which he mentioned in passing an alleged atrocity during the Minnesota Sioux uprising in 1862, a girl crucified by being pinned to a barn door. Since there have been wooden barn doors for centuries and millennia, no doubt stories, both true and false, have been told about people being attached to barn doors for many centuries.

Not the answer you're looking for? Browse other questions tagged war propaganda war-crime or ask your own question.

12
Were the events in Nemmersdorf a PR stunt of the Nazi propaganda?

22
What was the first known war in history?
9
Was the American Civil War the first to include multiple multi-day battles?
6
In the British Invasion of Greece, what happened to the British troops who were not captured?
4
Origin of the “Tartar” troops in the First Opium War
27
What was the Seven Years War called at first?
27
What / When was the first use of concentration camps in history?
6
When was the White Feather first used as a symbol of cowardice?
8
Who was the real beginner of Lord Ganesha festival?