What's the story behind this photo from WWI?

Warning: the photograph below is very graphic and may disturb some viewers, hence the spoiler tag. Click at your own risk. 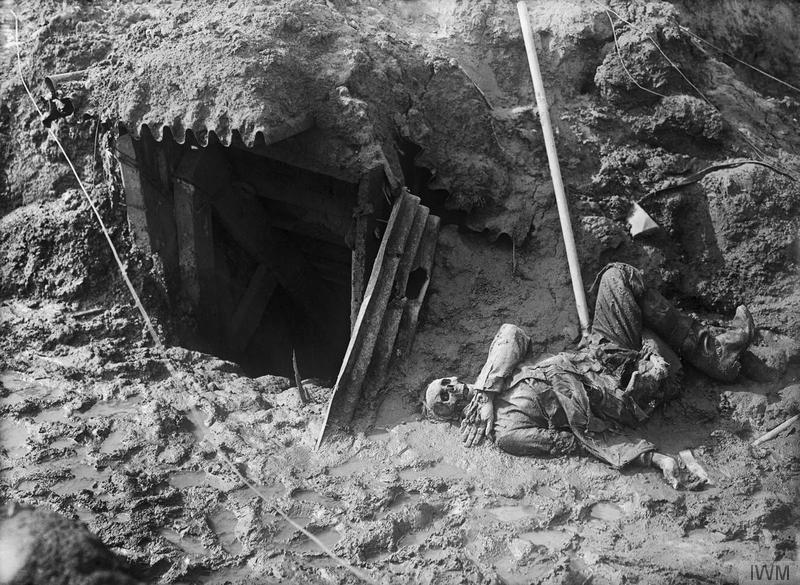 The picture shows the skeletal corpse of a dead German infantryman (the helmet is clearly German) outside a dugout shelter. It has become fairly famous, and is featured in the opening credits of the classic BBC documentary series The Great War.

The fact that the body was left in situ long enough for the flesh to decay completely suggests to me that it may be from one of the most lengthy engagements on the Western Front - perhaps the Somme Campaign or the Battle of Verdun, either late in the battle or shortly after it ended, but this is just an informed guess.

Do we know who this man was, where and when the picture was taken, or anything else about it?

This image seems to source from the Beaumont Hamel region, sometime during (or after) the Battle of Somme.

Beaumont-Hamel was situated near the northern end of the 45-kilometre front being assaulted by the joint French and British force.

Heavy losses from one Newfoundland regiment caused the founding of a memorial:

Versions of the image can be found on both

All I find concerning the soldier has him as unidentified German soldier.

Not the answer you're looking for? Browse other questions tagged world-war-one battle death photography combat or ask your own question.

9
Which town or village in Britain lost the greatest percentage of men in WWI due to “Pals Battalions”?
2
What is the story of this image?
7
What is the approximate date of this photo?
2
What's the history of this mortar shell?
31
When was this photo of Mission Dolores *actually* taken?
16
Can anyone identify the regiment and rank from this WWI photograph?
3
Is this photo of Gavrilo Princip or Nedeljko Čabrinović?
4
Can anyone help identify the country, rank, and unit this WWI uniform is from?