In the early 1900s, how did US politicians treat black dignitaries from other countries?

Are there any historical records of US politicians (especially southern politicians) treating black dignitaries (especially royalty) with great pomp and ceremony, while simultaneously and hypocritically refusing to acknowledge the equality of the black people living in America?

Perhaps prejudice was also shown to the visiting dignitaries, but I'm curious to know if there are any examples of a double-standard.

In the years before the Kennedy administration, visiting African dignitaries, mostly from Liberia and Ethiopia, could hope for (but not expect) the red carpet to be rolled out / meet a senior government official up to and including the president. However, when travelling around / visiting places, most could expect to be exposed to segregation and other manifestations of racism, though some were given protection or assistance.

In 1919, a delegation from Ethiopia / Abyssinia headed by Empress Zewditu's nephew visited the White House at the invitation of President Woodrow Wilson, a Virginian. The Ethiopian flag was flown over the national capitol for the occasion. Wilson, under whose administration segregation greatly increased in US government departments, was the first southern president since Zachary Taylor (died in office in July 1850). 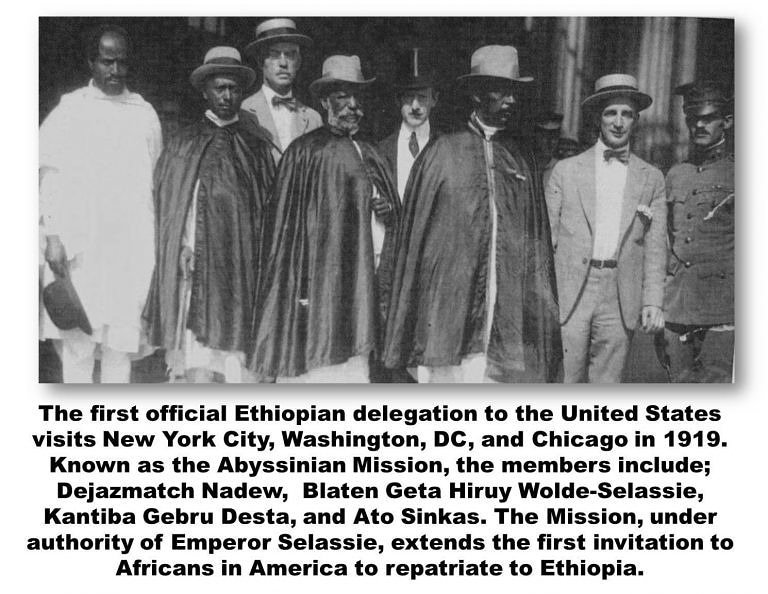 The militay officer pictured far right is most likely the group's chaperon, US Army Captain Morris. Source: Ethiopian American Development Council (EADC). Note that Haile Selassie was Crown Prince and Regent at the time, not Emperor.

The delegation ... travelled to Washington, DC, and discussed the furthering of their country’s relationship with US officials. In Washington the group stayed at the Hotel Lafayette, across from the White House, for a formal meeting with President Woodrow Wilson. The delegation brought gifts from Empress Zewditu for both President and Mrs. Wilson. The visit of the Ethiopians, dressed in their white shema, with their national flag of green, yellow, and red, flying over the national capitol, inspired racial pride in African-Americans.

Despite the fact that the delegation had been housed in luxury hotels and had received VIP treatment, they were uncomfortable about race issues in the United States. When they travelled to Detroit, Michigan, to visit General Motors, they were escorted by US officials, [Captain Morris, from U.S.Army, was the chaperon], who had been advised by the State Department to shield them from racial segregation. They also visited Chicago, Yellowstone National Park, and San Francisco.

However, this shielding could not get the delegation into any place they wanted according to this newspaper report (apparently from the Chicago Defender, founded in 1905 "for primarily African American readers"): 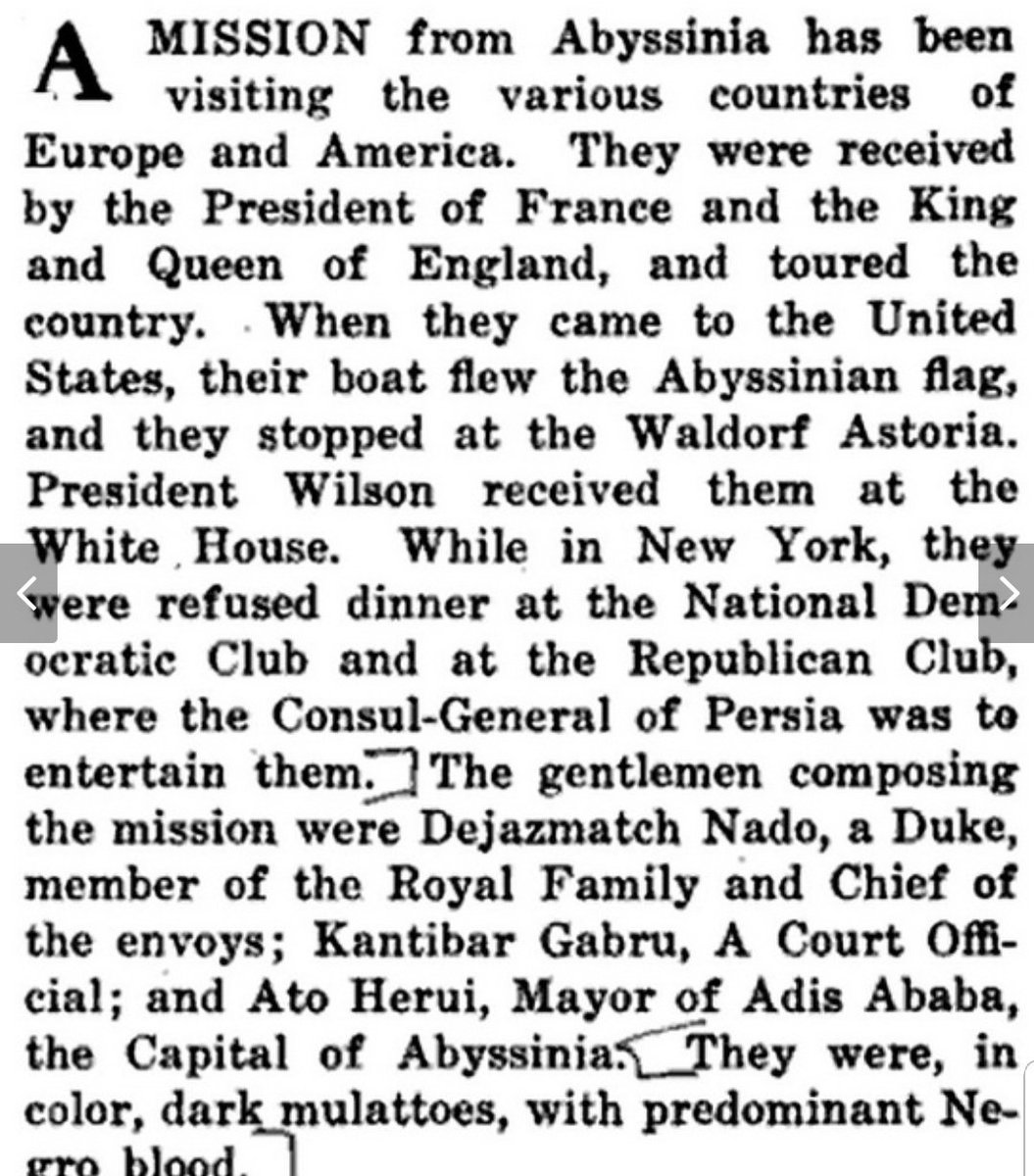 The next high ranking Ethiopian to visit (in 1922) fared considerable worse:

Subsequently, Ethiopians on official business could not escape racism in the United States. Dr. Martin Workeneh confided to the US envoy in Addis Ababa, Addison E. Southard, that Crown Prince Teferi was very much hurt at the reception of Blatengeta Heruy Wolde Selassie, who had been sent to America to purchase munitions in 1922. He was refused admission into the better hotels and theaters, and public institutions, and was deprived of even the ordinary courtesies.

Visits to the US by Liberian dignitaries date back to just after diplomatic recognition, but there are few details on how the Liberian visitors were actually treated.

...on January 13, 1863, a delegation from the new ally disembarked in Washington, D.C., to pursue two goals. First, the Liberian envoys wanted to shore up diplomatic relations with the Abraham Lincoln administration; second, they hoped to stimulate interest in emigration among the black population of the United States. The historical record is largely silent about whether the delegates achieved their first goal; there is no evidence that the delegation met with Lincoln or any of his high-ranking deputies.

Although Liberia had declared independence in 1847, diplomatic recognition had been slow in coming in part because

In 1908, Booker T. Washington arranged for another delegation to meet President Theodore Roosevelt, but again, details are lacking. Washington had dined with the same Teddy Roosevelt in 1901, an event which had resulted in "a political firestorm" with some southern representatives strongly condemning it, so one can imagine that these same southern 'gentlemen' would not have been open to greeting Liberians with pomp and ceremony (or even at all).

In 1921, a commission headed by the Liberian President Charles King seems to have been accorded little if any ceremony. There were discussions with State Department officials up to the level of the assistant Secretary of State Fred Morris Dearing and a possible meeting with the Secretary of State at the signing of an agreement, but there is no evidence that the Liberian head of state got anywhere near the White House despite his being in Washington DC for 6 months. It's hard to imagine any European head of state being given so little recognition.

From the late 1950s, as decolonization gathered pace, a steadily increasing number of African dignitaries visited and were stationed in the United States. Ghanaian Prime Minister Kwame Nkrumah was a notable visitor in 1958 and was greeted by Eisenhower at the White House (googling turns up a number of pictures). However, life for African diplomats was (to put it mildly) extremely difficult.

Discriminatory practices were still common in Washington, DC and the surrounding area during the early 1960s. Ambassadors, their staffs, and families routinely were denied service, and African diplomats struggled to find suitable housing in the informally segregated District of Columbia. Washington’s Metropolitan Club granted free membership to ambassadors, but denied it to African and Asian diplomats.

Source: History of the Bureau of Diplomatic Security of the United States Department of State

White supremacists “roughed up” a Ghanaian diplomat who traveled to Georgia to observe an election.

When an Ethiopian diplomat “received menacing phone calls” and found the tires of his car “repeatedly flattened,” Washington police “ignored” his requests for an investigation.

Most diplomats seemed to have learned to live with this degrading treatment:

In an August 1960 article for the Washington Post titled "D.C. is a Hardship Post for Negro Diplomats," reporter Milton Viorst was able to convey to his readers the state of affairs for these diplomats as they made their way to D.C.: "[The diplomat] has learned to live in 'colored' hotels, eat in 'colored' restaurants, and spend his evenings in 'colored' movies. When asked how he accepts it, he shrugs and calls it a hazard of his profession."

Nonetheless, whatever they may have said publicly (they were diplomats, after all), the segregation experienced by African diplomats caused considerable harm to the reputation of the United States, and at a time when the Soviets were vying for influence in Africa. Thus, in February 1961, the Special Protocol Service Section was set up to protect African diplomats in the US.

Nonetheless, problems were still evident to all. In May 1963, Milton Obote, then Prime Minister of Uganda,

For diplomats, there were still major incidents. For example,

a restaurant on U.S. Route 40 (connecting Washington, DC with New York City) denied service to the Ambassador from the new nation-state of Chad, Adam Malik Sow, who was travelling to Washington to present his credentials to President Kennedy. After the incident, the Ambassador did not continue to Washington; he instead returned to Chad and quit.

Secretary of State [Dean] Rusk related another instance in which an African delegate to the United Nations was travelling to New York and his plane stopped in Miami. “When the passengers disembarked for lunch, the white passengers were taken to the airport restaurant; the black delegate received a folding canvas stool in a corner of the hanger and a sandwich wrapped with waxed paper. He then flew to New York, where our delegation asked for his vote on human rights issues. That same ambassador later became his country’s prime minister. We learned later that his chronic bitterness toward the United States stemmed from that incident.”

At least one Black head of state was received on an official visit prior to the Civil Rights era. This was Liberian President Edwin Barclay who followed FDR's 1942 visit to Liberia by making an official visit to Washington, DC in 1943. Per Wikipedia, he had a mixed ethnic background, and "was the first black man to be officially introduced from the rostrum of the United States Congress as a guest of honor."

You'll conclude for yourself whether you see this treatment as hypocritical. 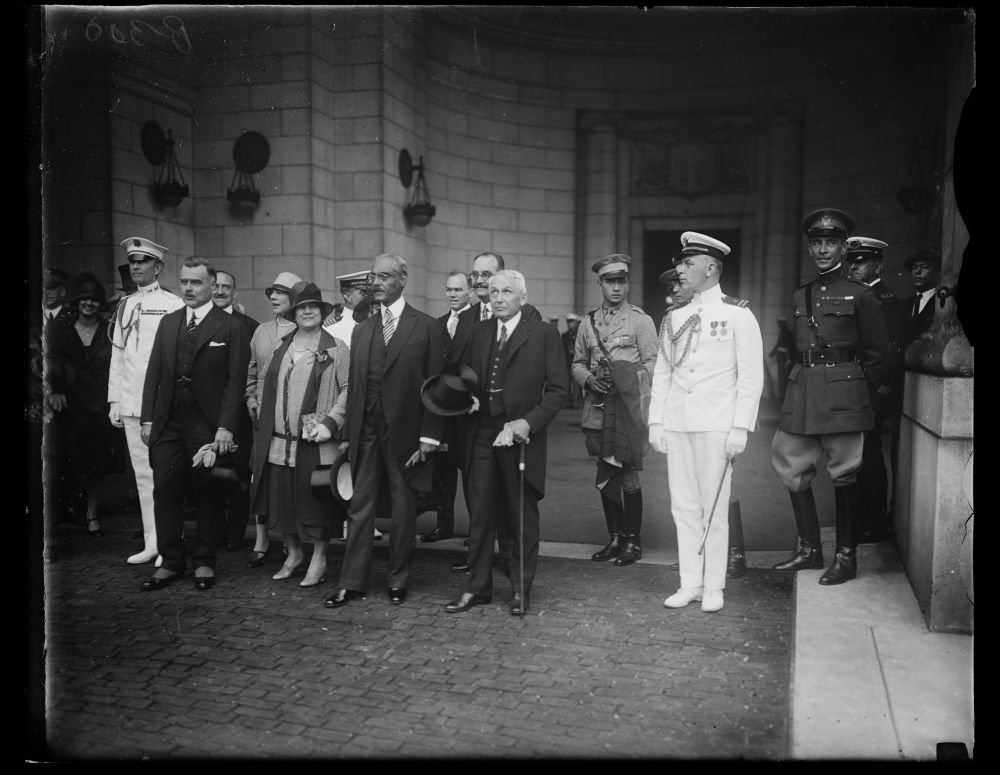 The only story that I can -vaguely- relate here is the offer of king Mongkut to send elephants to America. The offer was made to Buchanan, but when it reached him Lincoln had taken office. He politely declined.

Apart from Thailand (at the time Siam), Japan, Abyssinia (Ethiopia) and don't forget Liberia (!) very few third world countries were independent. None other in Africa, apart from the Boer republics (Oranje Vrijstaat and Transvaal). But they weren't black nations.

Not the answer you're looking for? Browse other questions tagged united-states 20th-century political-history international-relations racism or ask your own question.

5
Did any black athletes other than Jesse Owens win any medals in the 1936 Berlin Olympics?
3
Were the Chinese Warlords backed by other countries?
6
How did desegregation affect the jobs of black school teachers in the South?
1
How long would it have taken to get to the Poconos in the early 1900s?
7
Did "music pendants" exist in the 1800s/early 1900s?
2
Why did Italian immigration to the US decrease from 1900s to 1920s?
2
What did anti-Greek stereotyping look like in the United States in the early 20th century?