Are species introduced to England and Wales by the Romans still found near Roman settlements?

Anecdotally, it seems as though species of fauna and flora introduced to England and Wales during the Roman occupation are still more likely to be found near Roman settlements. Obviously, some introduced species, such as the rabbit, are now extremely widespread. But, for example Alexanders was introduced as a food plant, and still grows in profusion around Richborough Castle, the former Roman fort of Rutupiae. I have only ever seen the edible Roman snail in England in the grounds of a former Roman villa.

Has anyone studied this to see if there's actually a statistically significant correlation, 1,600 years on?

There are, at present, two questions here:

As an aside, the article on archaeobotany and zooarchaeology fixed future research emphasis on (over a point-by-point sampling which favours towns of relatively few people over the countryside where the majority lived) (at least in that author's opinion):

the transformation and communication of knowledge about the landscape of Roman Britain and, more ambitiously, the utilisation of existing popular awareness of Roman introductions and legacies as way of engaging with and advancing much broader issues of contemporary concern, such as alien versus native species, the changing character of the British landscape, and even national identity in a globalised world.

I will expand on the 'maybe' part of it to bring some non-statistical responses. I am using Witcher's 'On Rome's ecological contribution to British flora and fauna' as my basis here.

Firstly, we should note the following statement of caution:

Another issue is that confidence in the comparatively large datasets from the Roman period may encourage unwarranted confidence in the records from earlier and later periods; however, in many cases, especially the Iron Age, the record is simply too fragmentary to be certain that some species really were missing and therefore had to be introduced in the first place (e.g. brown hare, Yalden 1999, p.128) or that species had to be reintroduced following post-Roman extinction.

So, my 'maybe' is because the article says that while numerous species were introduced, they fared very differently. Some took to the new climate well (also, of course England/Wales have an internally varying climate as well and a plant that grows in the South may not want to grow in the North, etc...) while others had to be manually tended.

Examples of species which took well to the new climate are the cherry and the ground elder:

Many species had only arrived in Italy a few decades before they subsequently travelled to the north-western provinces. At Rome, new species such as cherry (Prunus spp.) and peach (Prunus persica) were perceived as neither civilising nor improving; indeed, their origins in the Greek East linked them with the excessive luxury associated with imperial adventure.

Even the few Roman introductions which are considered to be pests today are provided with the cultural excuse that their introduction was well intentioned, for example, ground elder (Aegopodium podagraria) as a vegetable.

Some Species Thrived in Specific Locations

Some species, while finding the climate favourable, were also of weaker stature and either thrived when cultivated or in very specific locations.

It is said you can trace old Roman roads by the wild cherry trees that grew up from the stones spat out by legions as they marched across the country (The Telegraph 2009).

However, this is a bigger romanticisation than we can actually easliy prove with the data we have. Witcher notes how the majority of our data comes from inhabited locales, and that writers of all periods have been very happy to associate the plant with the Romans through popular culture or the plant's name while actually constructing a bridge of that proof would be perhaps much more difficult:

Proximity to Roman sites has also been used to rationalise and romanticise the presence of rare or unusual plants, including actual or suspected introductions. Anne Baker’s (1854, p.386) Glossary of Northamptonshire Words and Phrases records that field eryngo (Eryngium campestre) was known as Dane-weed, but that “[a]s the old Roman road is the only known habitat for this rare plant, the Watling Street Thistle is a still more common local appellative”.

Loudon notes the tree’s proximity to a Roman site and suggests “[i]t is not improbable that the tree referred to may be a descendent from a service tree planted in the orchard belonging to the adjoining Roman villa”.

For example, documenting her visit to Chesters fort on Hadrian’s Wall, Maria Hoyer (1908, p.5) recalls: Also we looked with longing eyes at the little clusters of Erinus Hispanicum (or Alpinus) growing upon the walls, that tiny Spanish plant which has sprung up since the excavations, and which is believed to be a legacy from the Asturian Cohort, the Second Ala of which was long stationed at Cilurnum.

Lastly, we have the species which are not associated with per se Roman settlements, but either Roman-developed (image below) and/or later introductions in the grapevine:

For instance, much early winemaking in England was conducted in Benedictine monasteries for religious purposes – changing rites and the treatment of the monasteries by the crown (Henry VIII in particular) clearly impacted wine production there.

Wine making never completely died out in England, there were always a few die-hard viticulturists willing to give it a go, but production clearly declined after the 13th Century, had a brief resurgence in the 17th and 18th Centuries, only to decline to historic lows in the 19th Century when only 8 vineyards are recorded.

Since 1977, a further 200 or so vineyards have opened (currently 400 and counting) and they cover a much more extensive area than the recorded medieval vineyards, extending out to Cornwall, and up to Lancashire and Yorkshire where the (currently) most northerly commercial vineyard sits. 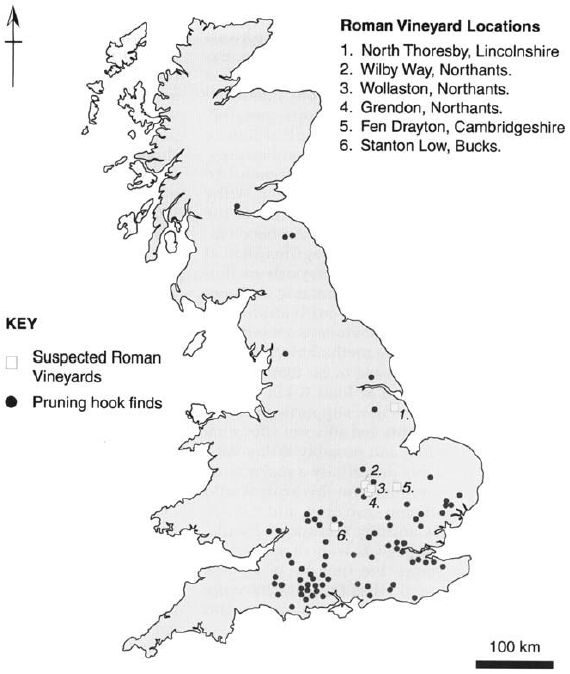 And, I'll also finish with a statement of caution:

For example, the fascination with exotic species perpetuates an emphasis on rare animals and plants. Yet even if the attested examples of fallow deer (Dama dama), pheasant (Phasianus colchicus) and peacock were increased by an order of magnitude, or even two, their numbers would remain vanishingly small. Their archaeological rarity suggests that they were highly-prized specimens valued for social display with limited significance for the wider ecology of Roman Britain. Recent syntheses make clear that species such as almond (Prunus dulcis), fig and peach were largely restricted to high-status sites such as towns, forts and villas which are all overrepresented in the archaeological record compared with the villages and farms where the majority lived (Hingley 2000, table 10.3; van der Veen 2008, pp.97-8; van der Veen et al. 2008).

The article also expanded on that figs, even if imported, could not have pollinated without the specific species of bee that does the job in the Mediterranean, so it would have had to be manually re-planted.

Therefore, the answer essentially depends on the species and whether:

There is an important probability that the flowers and other vegetables that were introduced by the Romans spread in the culture of the local inhabitants, after the end of the Roman era/occupation.

You should also consider that some species are likely to widespread in the territories, and the relief (mountains, rivers) will be the only obstacles to retain them in the area of former Roman settlements.

Not the answer you're looking for? Browse other questions tagged roman-empire england food or ask your own question.

17
How accurate and detailed were geographical maps created and updated by the Romans?
15
Did the Roman Empire extend as far north as the Romans could grow wine?
7
Are the quantities of gold that the Roman Empire looted and mined known?
8
Border between the Western and Eastern Roman Empires
6
Did the Eastern Romans also use roman concrete?
2
Did the Celts come to England from France and Belgium?