What laws did the king "refuse to pass... unless those people would relinquish the right of representation"?

In reviewing the Declaration of Independence, I note that it states that that King George III

"refused to pass other laws for the accommodation of large districts of people, unless those people would relinquish the right of representation in the legislature".

What laws did he not pass unless the people relinquished their right of representation?

Actually, King George III didn't refuse to pass any laws. All the acts passed by Parliament during his reign received Royal Assent.

For context, in 1766, Parliament had passed the Declaratory Act, stating the colonies were subordinate to Parliament and subject to British Law. That, coupled with a number of tax laws passed by Parliament (beginning with the Sugar Act of 1764 and the Stamp Act of 1765 followed by further acts after 1766) fuelled the colonists' grievances, and led to claims of “no taxation without representation!”.

In 1775, the Second Continental Congress issued the Olive Branch Petition as an attempt to reach a compromise. I think Jefferson's argument in this section of the Declaration of Independence is actually a reference to the king's rejection of that petition.

Now, although it is true that the king had rejected the petition, Parliament had not yet debated it, so there had not been any chance for Parliament to formulate a law, let alone for the king to give Royal Assent. Before that debate could happen however, the petition was fatally undermined in the minds of the British public and Parliament by a captured letter from John Adams (who had been a signatory of the Olive Branch Petition, but who argued in favour of rebellion in the captured letter).

This grievance refers to the Proclamation of 1763; and the refusal of the British Parliament and King to reverse or modify it.

And We do further declare it to be Our Royal Will and Pleasure, for the present as aforesaid, to reserve under our Sovereignty, Protection, and Dominion, for the use of the said Indians, all the Lands and Territories not included within the Limits of Our said Three new Governments, or within the Limits of the Territory granted to the Hudson's Bay Company, as also all the Lands and Territories lying to the Westward of the Sources of the Rivers which fall into the Sea from the West and North West as aforesaid.

And We do hereby strictly forbid, on Pain of our Displeasure, all our loving Subjects from making any Purchases or Settlements whatever, or taking Possession of any of the Lands above reserved[,] without our especial leave and Licence for that Purpose first obtained.

And. We do further strictly enjoin and require all Persons whatever who have either wilfully or inadvertently seated themselves upon any Lands within the Countries above described. or upon any other Lands which, not having been ceded to or purchased by Us, are still reserved to the said Indians as aforesaid, forthwith to remove themselves from such Settlements. 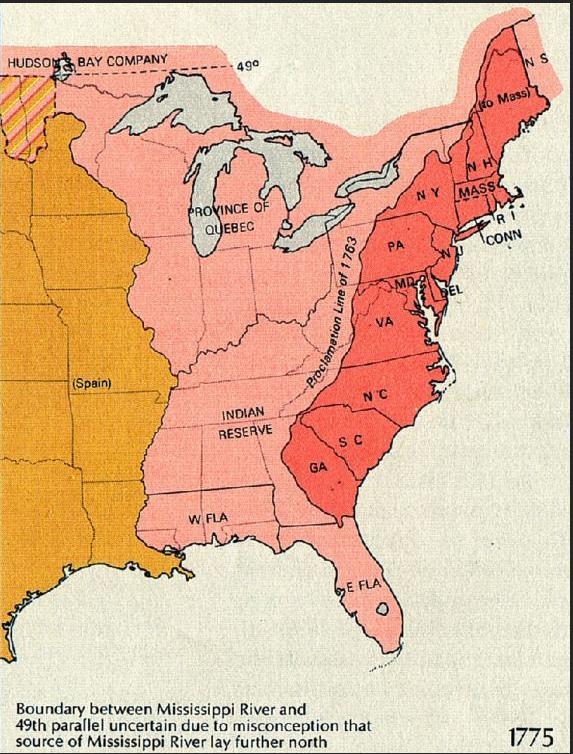 From Wikipedia - Royal Proclamation of 1763

The proclamation declared all territory west of the Appalachians as an Indian Reserve, and forbade colonial expansion into it. That is the meaning of:

... other laws for the accommodation of large districts of people, ....

The colonists wished to expand into the territories west of the Appalachians (ie "all the Lands and Territories lying to the Westward of the Sources of the Rivers which fall into the Sea from the West and North West as aforesaid.")

The reference to "... unless those people would relinquish the right of representation in the legislature." probably refers to the phrasing above of

... without our especial leave and Licence for that Purpose first obtained ...

though I have not yet tracked this down definitively. The refusal to allow this land to be either part of an existing colony expansion, or part of a new colony, would quite suffice to match the grievance as phrased.

Not the answer you're looking for? Browse other questions tagged united-states united-kingdom or ask your own question.

21
When was the American War of Independence first called a 'Revolution'?
12
How were new states admitted to the Union?
2
Governors' veto power
2
Was there a time when George Washington discovered some of his soldiers absolutely refused to swear loyalty and obedience to the Continental Congress?
11
Why was Kentucky not admitted to the Union in 1789?
1
What are some examples of King George III "protecting [the British] from punishment"?
6
Why wasn't Angelica Schuyler in danger in London despite supporting revolution?