In one of his War thunder (a realistic tank battle simulator) videos, Oxide used a small, quick tank with a high armor penetration weaponry, and proceeded to ambush and flank German tanks from alleys, then essentially destroyed them from point-blank range, while the tanks weren't able to do anything, because the target was too close. 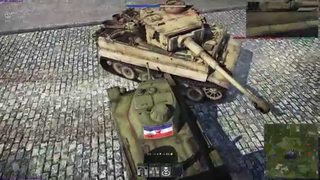 Did such tactics occur in WW2? If yes, the how successful were they against trained tank crews

world-war-two tactics tanks
Share
Improve this question
edited May 11 '17 at 16:17

The most lethal enemy of the tank was not another tank.

By percentage, of 1305 WWII tank losses by the British, these were due to:

While the computer game "tactic" you describe might or might not work against a single enemy tank, it doesn't remove the other dangers to your tank in a real battle, to the contrary.

Most importantly (as Santiago already pointed out), fighting in a city very much increases the threat of AT guns and infantry action (mines, Panzerfaust) due to the close quarters and quite limited vision from within a tank. The chances of two tank units engaging each other in city streets are quite low to begin with.

And your "tactic" would only work against a single Tiger (or similarily large tank), without backup or supporting infantry. Also, actually ramming an enemy tank would very likely result in your (lighter) tank being immobilized, not to mention injury of the crew. Also note that the gun barrel of the computer tank in your picture is dangerously close to being rendered inoperative due to smashing into the Tiger's side...

Could it work? Perhaps.

Would it make for a tactic worth "teaching", or "employing" to any significant extend? I don't think so.

In WWII usually tanks avoided closed spaces (woods, cities, etc.), and as a defensive weapon is quite more effective an assault gun (a tank chassis with a gun, but without a mobile turret) or later on the bazooka and the panzerfaust for infantry.
In the case that a tank that you describe, the tank does not need so close to its target, because is too risky. Besides, the penetration of the gun does not increase so drastically when you are so close to the target (10% of penetration loss for every 500 meters).

Seldom times that kind of tactics were used, the most known case is the Battle_of_Prokhorovka, were so many tanks were in the same place at the same time that some Russian tanks tried to get as close as possible during the engagement. In the case of this battle the tactic was successful, because German tanks lost their gun superiority when soviets approached too close.

There were some reports of ramming enemy tanks, but it was never a trained tactic, instead being an act of desperation. Slamming a several ton metal box on treads into another box is likely to result in both being disabled, and generally you want to avoid 1-1 trades of equipment like that.

In terms of getting in too close for the enemy to hit you, Oxide here is helped by the fact he is in a T-50 (basically a baby T-34). The T-34 (the most common Russian tank) is ~8ft tall, while the Tiger I is ~10. He is also helped by the clipping of the gun barrels. He can stick the gun through the enemy tank with no problem. RL physics do not work that way.

On a slightly different note, those (in-game) Tiger's would probably have done better if they just tried to crush the T-50. WT physics can have some interesting effects.

Not the answer you're looking for? Browse other questions tagged world-war-two tactics tanks or ask your own question.

21
What was the first successful mass tank battle of WW1?
13
Why did ramming reappear then disappear in 1800s shipborn warfare?
65
What damage did anti-tank rifles hope to inflict on tanks in WW2?
5
What was the outcome of the first tank battle?
8
Did Cossack cavalry defeat German tanks during WW2?
3
Did any "tanks in front" tactic exist during WW2?
10
How did Soviet soldiers resist tanks during the battle of Shumshu?
0
What was the average age of tank crews, in particular commanders, in WW2?
3
When did blackouts occur in Cairo during WW2?