Were fake anti-tank mines A Thing?

In the movie Children of Glory (Szabadság, Szerelem), there's a scene in which one of the female protagonists took a few pans, broke off their handle, and placed them on the ground to fool a tank into thinking that those pans were mines. The tank gets scared and moves into a dead end, where, after its support is killed, it gets flooded with love and Molotov cocktails, ending its career in a particularly amusing campfire. 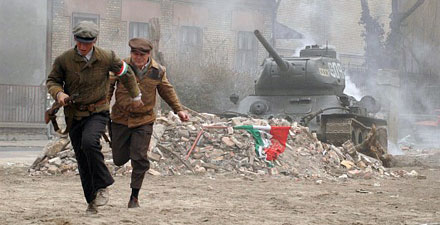 The aforementioned scene, link in the picture.

T-34 was evaluated at Aberdeen, by the Germans, Finns, &c, and one of the common major complaints was poor visibility:

Individual tank commanders lacked situational awareness due to the poor provision of vision devices and preoccupation with gunnery duties.

This improved with T-34-85 (added observation cupola in the roof of the turret, tank commander relieved of gunnery duties).

I would expect that the T-34 crew would not notice the "mines", but if they did, they would probably not ignore them.

However, the correct tactical use of a tank requires infantry support which should both notice the fake mines and might even be able to identify them properly.

Finally, war is war and anything can happen. Crew training, smoke, morale - there are so many factors.

Dummy anti-tank mines, consisting of ordinary china plates placed upside-down on a road were apparently used by a British Army unit during the retreat to Dunkirk in 1940. This improvisation later featured in an SOE training course, and the British Military Training Pamphlet No.42.

Like any anti-tank mine, you'd want to put them somewhere that tanks couldn't easily bypass them, and where infantry trying to remove them can be shot at from range.

Not the answer you're looking for? Browse other questions tagged tactics hungary or ask your own question.

14
Why were the Prague Spring leaders treated more leniently than Nagy and his colleagues?
14
Why were there “hussars” all across Europe?
8
How were mounted infantry (like dragoons) used in battle?
9
Why were Austria-Hungary's Slavic minorities put into multinational states?
15
How tight were shield walls in Saxon England?
1
What were German submarine tactics?