Alfred the Great was ill with (possibly) Crohn's disease. Despite this he managed to wage war very successfully. Is there any possibility he could have know of the benefits of taking Frankincense? He seems to have had a lot of it.

I'm always suspicious of modern diagnoses of ancient illnesses. At best it's educated guesswork. Given that most modern doctors are unwilling to give a firm diagnosis of a patient without a proper physical examination, and carefully avoid guessing based simply on reported symptoms (let along second-hand reported symptoms), why would anyone think it's possible to diagnose an illness that happened 1100 years ago, and for which only a secondary source account survives?

Nevertheless, the association of Alfred with Chron's disease is a more educated guess than some. What can be reasonably relied upon is that Alfred had a lifelong problem with his bowels. The full article is here

Could Alfred have known of possible benefits of Frankincense and made use of them to alleviate his symptoms?

It's possible because Frankincense was a well-known and highly valued substance associated with Jesus Christ. But it's extremely unlikely - vanishingly unlikely - because Frankincense was probably not available in Europe at all at this time. Wikipedia claims that it was 'reintroduced' to Europe by Frankish crusaders returning from the Middle East, and the First Crusade began in 1095, almost 200 years after Alfred's death.

We do know that Alfred got advice on remedies for digestive tract ailments from Elias of Jerusalem (a part of the world where Frankincense was available), and we even know what Elias recommended. But it wasn't Frankincense. Instead it balsam, marking the body with crosses, and drinking 'petroleum'.

Here is the extract of the partriach's advice (taken from Medieval and Early Modern Sources Online, where Leechdoms, Wortcunning and Starcraft of early England: History of Science before the Norman Conquest, vol. 2 (500-1066) is available.) 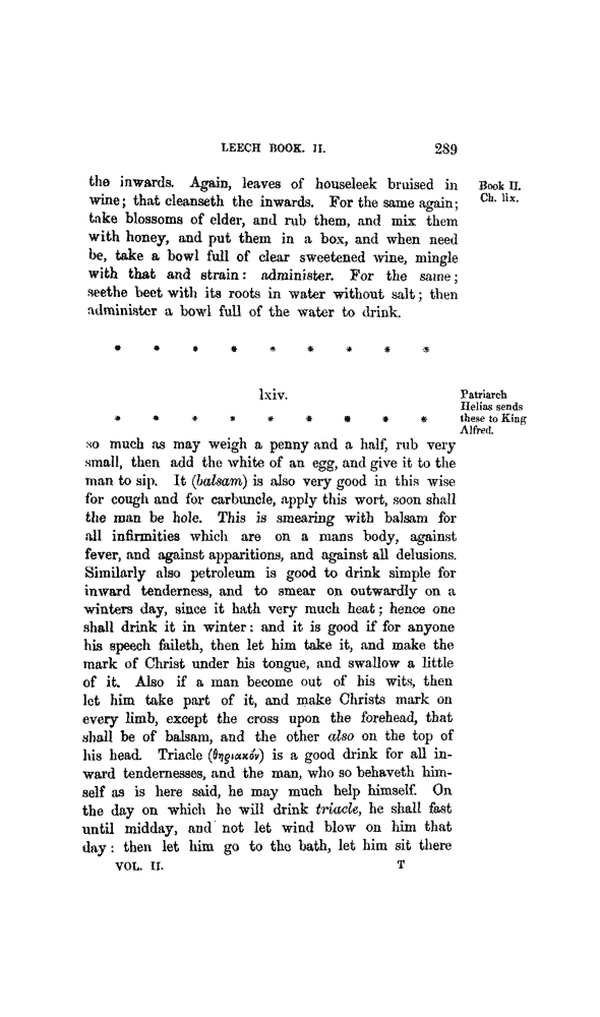 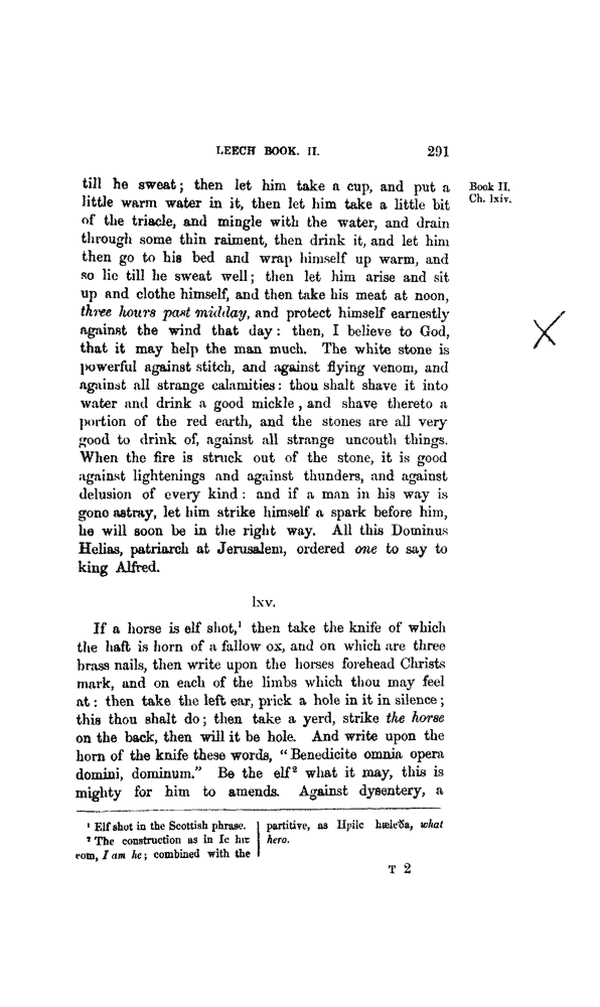 In the absence of evidence, you can't rule something in or rule something out. All you can say is something is likely or unlikely. It's highly unlikely that Alfred would have been able to access Frankincense, although not impossible. If he did access it, nobody thought to write the fact down, so we'll never know. We therefore have to make a judgment on the balance of evidence and probability. It's extremely unlikely, and there's no evidence, and therefore it's not something that a historian could ever suggest too place.

History is not scientific, but it does depend on evidence and judgment about the balance of probabilities. In this case, we can be as close to certain as makes no difference that Alfred would not have used Frankincense.

While a number of modern differential diagnoses based on the evidence preserved in surviving manuscripts have concluded that Alfred probably suffered from Crohn's Disease (or similar), I'm not aware of any suggestions in those manuscripts that he took frankincense medicinally. However, Elias, Patriarch of Jerusalem, did send unspecified herbs to help treat the symptoms.

That said, as I understand it, frankincense was used in burials in Britain during the Roman period but went out of use across northern Europe as a whole with the fall of the Roman Empire in the 5th century. It was re-introduced by Frankish knights returning from the crusades in the 12th century.

If Alfred had been taking frankincense medicinally in the 9th century, or had the significant quantity of incense mentioned by Asser been frankincense, it would probably have been worthy of recording explicitly in the chronicles.

18
What is known about the possibility of a "real King Arthur"?
11
Colonies in Machiavelli's age
3
Battle which has been decided by an epidemic plague
3
Do any sources confirm this quote from Pope Urban II's speech at the Council of Clermont?
11
Was rape common in Europe during the Middle Ages?
25
Has there ever been an archbishop or bishop younger than the 16-year-old James of Nicosia?
25
Was frequent bathing for personal hygiene in medieval Europe common or not?