A 1997 czech movie Knoflíkáři depicts a "Fat Man" atomic bomb that should have been dropped on Kokura town, but the target has been changed to Nagasaki for a bad weather conditions (which is historically correct).

The image of the bomb itself is not so accurate. What interests me is the triangular symbol on the bomb. I can't find its meaning anywhere. Is the symbol purely fictitious or does it have any meaning? 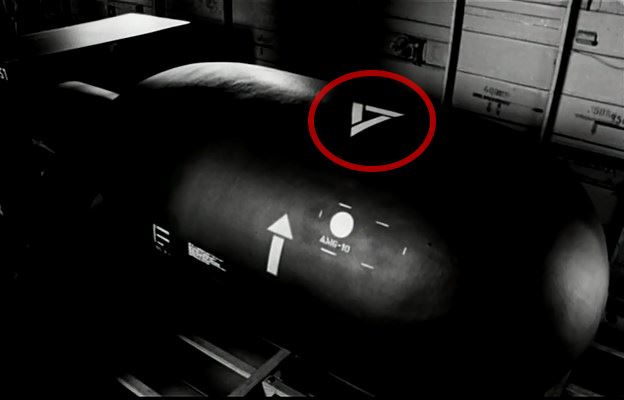 The bomb depicted is of the "Little Boy" type, not the "Fat Man" type. (Note the elongated form -- "Fat Man" was more rounded.) So we're looking at the Hiroshima bomb, not the Nagasaki one. (Quite a slipup by the movie producers...)

This is a picture of "Little Boy" directly prior to being loaded into Enola Gay. There are no such markings on the bomb, indeed there are various differences (external fastenings, cables, bolts etc.) between what was loaded into Enola Gay and what is pictured in the question.

So, while the symbol might have a meaning somewhere, it has none with regards to "Little Boy", because it was not on "Little Boy".

1
End of WWII: potential U.S. atomic bomb production rate
11
Is it true that Hitler led to the invention of the Atomic Bomb by the Americans?
3
Who made these comments relating to the use of the atomic bomb?
3
What were the plans to use the atomic bomb if it had been in time for the war in Europe?
1
Did Soviet Union really consider using atomic bomb against US aircraft battlegroup?
32
What was the plan for an abort of the Enola Gay's mission to drop the atomic bomb?