Is this movie tactic realistic? [closed]

In the movie "Children of Glory", there's the tank scene, (I wouldn't ask about the validity of war films in normal cases, but this isn't from Hollywood) which plays out in the following way:

Is this a realistic tactic, or it would have gotten the rebels killed in real life?

It's said, that they've put a significant amount of research into the movie, I'm interested in whether it's true or not.

I don't see why not,

- Someone shouts that the tank is coming, at this point, the barricade is ready.

This is the only section which is debatable and really depends on the model of tank, but it is possible as proved by this video Basically how it would work is as follows: 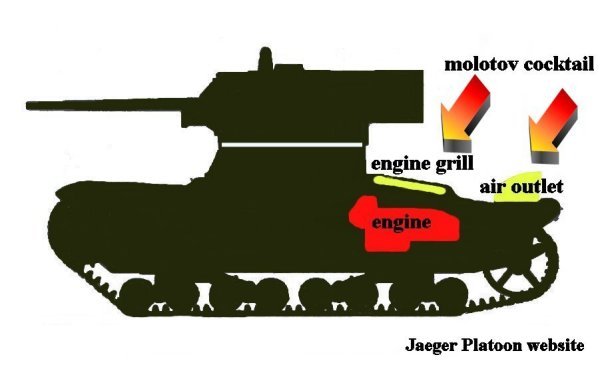 You drop the cocktail on the engine grill at the back, the burning gas and oil would suffocated the engine and could set fire to some petroleum parts/residue inside the engine, along with damaging cables and other external instruments. If there is lack of oxygen inside the tank the crew may need to escape through the belly batch in which case you could then shoot at them.

Not the answer you're looking for? Browse other questions tagged tactics or ask your own question.