What does the following picture represent in historical context? 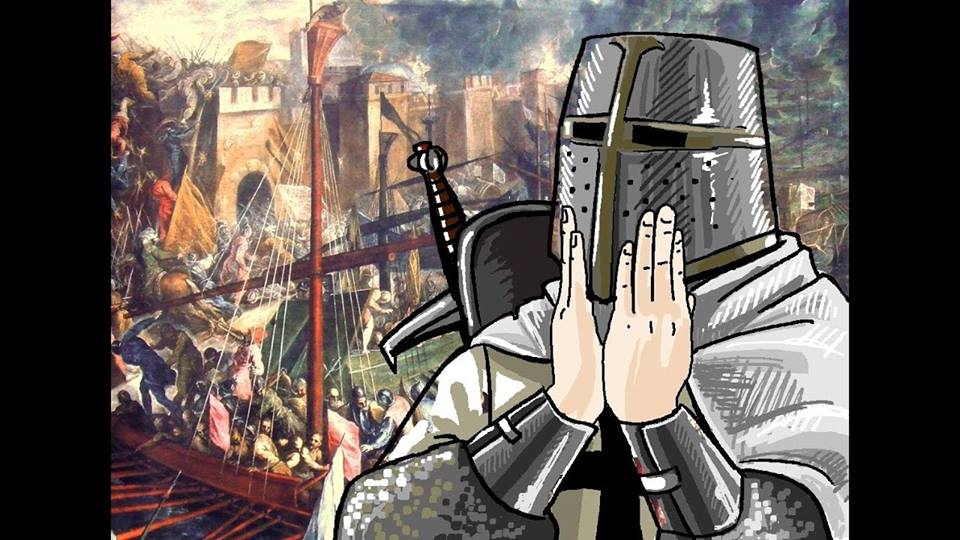 This is a picture just sent by one of my friends.

He is trying to convey some message. I didn't get him, neither did I get the picture.

The basis for that picture is the Feels Good meme. It's used for expressing satisfaction with something. Variations like this often show a character seeing some desire stereotypical for them fulfilled. In that context the picture is depicting a crusader's pleasant feeling when doing some nice crusading.

The historical context doesn't go any deeper than "It's showing crusaders doing their stereotypical Muslim-killing thing". The actual painting used is not important - and is actually even poorly chosen, considering it depicts the sacking of Christian Constantinople as PhillS points out in his answer.

(Bonus guess: Your friend's sending you this picture was probably somehow related to a conversation about islamism/islamic terror and (jokingly) pointing out how good he thinks it would feel to go on a crusade against them)

The original painting is apparently depicting the fall of Constantinople in the 4th crusade in 1204 AD. I'm pretty certain that this is what the meme image is using it for (haven't been able to find out in a cursory search what the painting was actually titled or who painted it).

The event is noteworthy because the 4th crusade set out to recapture Jerusalem and the holy land from the Muslims, but what they actually ended up doing was sacking Constantinople, which at the time was the largest Christian city in the world. Which is probably why you have a knight wearing stereotypical crusader armour looking a little embarassed: oops, we've accidentally destroyed a city of our own people rather than recapturing a city from our enemies.

The Teutonic Germanic nights of the times of the middle to late dark ages. They were known for this type of design and style of armour. And I'm pretty sure it is to depict the reaction of those peoples to the sacking of Constantinople in the background.

32
Why did Saladin show kindness to Richard I?
7
What did the Crusaders really wear?
8
What was the status of peasants who left to join the People's Crusade?
7
What was Pope Innocent III's response to the Children's crusade led by Stephan of Cloyes?
10
Jerusalem 1187: How did ethnicity impact Saladin's army?
6
What was the Hospitaller gonfalon like in the 12th and 13th centuries?
8
What are the origins of this pendant?
8
What were women doing at the Battle of Dorylaeum during the First Crusade?
2
Were there any rewards for going on a crusade aside from being forgiven for one's biblical sins?
5
How did the Crusades change medieval Islamic culture?