Did the Sword of the Republic really fall from the Arc de Triomphe on the first day of the Battle of Verdun?

According to several sites - none of which offer sources or citations - the Arc De Triomphe de l'Étoile was damaged on or near the same day that the Battle of Verdun began in February 1916. These sites, including this one, claim that the Sword held by the Republic on the La Marseillais relief broke off.

Some accounts go on to say that the damage was immediately concealed behind a tarp to prevent people from treating the damage as an omen portending disaster:

The sword carried by the Republic in the Marseillaise relief broke off on the day, it is said, that the Battle of Verdun began in 1916. The relief was immediately hidden by tarpaulins to conceal the accident and avoid any undesired ominous interpretations.
- Wikipedia

Note: The footnote citation in the Wikipedia article links to the page I linked above, which offers no sources or citations

Is there any evidence that this story is true, and if so, when and how did the damage occur?

Just like the curtain in the temple when Jesus died?
English Wikipedia has a shady reference, Italian Wikipedia a [citation needed] attached to this tidbit.

The other languages pages of Wikipedia never mention this, not even the French! Not for the Arc de Triomphe, not for "The Departure of the Volunteers 1792"/"Le Marseillaise", not for the sculptor Rude. All instances on the web that mention this sword incidence at the day the battle of Verdun began do that in conspicuously similar language.

If we look at pictures (click to enlarge) the relief today:

A copy in Dijon at the Musée Rude: 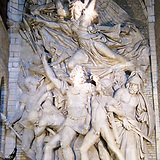 As it looks on the arc today (WP: Rude): 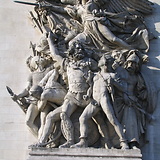 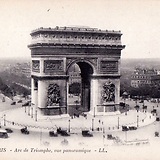 As it looked in 1919 when the famous flight was made victory parade passed through it: 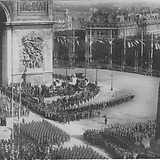 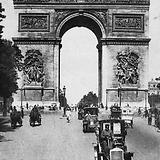 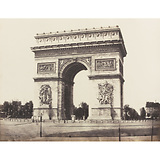 Compare a colour photographs from much later: 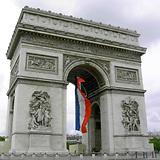 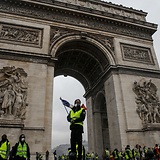 There it seems to be missing a sword? Well in 1988 it had to undergo a full reconstruction/restauration. But it is just the perspective shortening the sword.

Not the answer you're looking for? Browse other questions tagged france world-war-one architecture paris monument or ask your own question.

20
What was the first successful mass tank battle of WW1?
11
How did the First French Empire and allies differ from the other European monarchies at that time?
1
How was Napoleon able to take power from the Republic
5
What was the outcome of the first tank battle?
9
How did the US fall behind in airplane technology from 1909-1917?
5
When were the first deaths from the Spanish Flu Pandemic?
25
When did the round house fall out of vernacular use throughout Britain and Ireland?
10
What was the significance of the BEF moving into the gap between German forces in First Battle of the Marne?
5
Did Louis XIV flee from the Louvre or the Palais-Royal on 5th January 1649?