What were the dominant Native American cultures in Eastern Canada and New England in the late 900s?

It's an oddly specific question, I know. Just to lay my cards on the table I'm writing a piece of short fiction about a small band of vikings that penetrates deeper into the American interior than any of the real Norse settlers probably ever did. I know plenty about the early medieval Norse, but little about the indigenous cultures of pre-contact North America. I'm hoping that by asking here I'll be able to get a frame of reference and some key names I can use to begin doing research.

I can be pretty sure my vikings will attracted to settled towns, always wanting for supplies, and wary of centralized military force. So which cultures in eastern Canada, and the northeastern United States were the most settled, prosperous, ubiquitous, and/or militarily dominant in the late 900s?

This is something I've been researching myself. Not that specific date of course, but in general trying to track the flow of pre-Columbian North American peoples and civilizations.

Sadly, there's no book I've found that does this to reference (tempted to make my own...) There aren't a lot of direct resources for this, and a lot of knowledge is fast changing. But I'll do what I can for you.

What we know from Viking contact times is that the natives in nearby north-eastern Canada at the time were going through a transition. Archeologically these are referred to as "Dorset" and "Thule", but they were both the same group of people. Today we call them Inuit (or popularly, "Eskimoes"). Their mammal hunting culture turned out to be about the best way for humans to survive in that climate, which is why they eventually pushed out everyone else up there, native and Viking alike. The Vikings of course didn't care much for finer cultural differences, and just called all the natives "skraelings"

The Innu were/are Algonquian-speakers (closely related to modern-day Cree). This was historically a hunting-gathering culture that thrived in the wooded river areas that part of North America abounds with. Not a lot is known about the Beothuk, but they were likely also Algonquian. None of these people would be considered very civilized by Viking standards (no large permanent cities and farming).

Further inland, things get really speculative, because we have to go from archeology, and contact information centuries later and try to rewind. 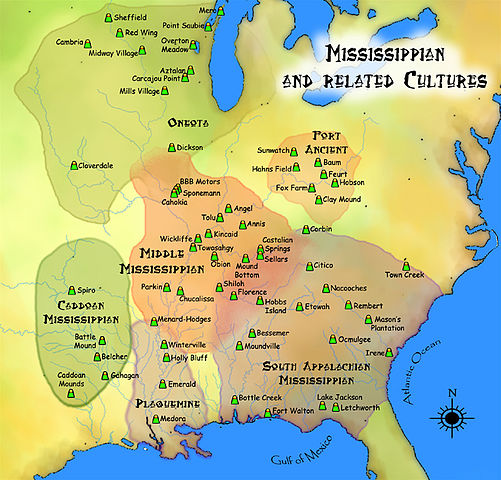 You can still find the ruins of these cities in that part of the US, but they are (rather myopically) called "mounds" rather than cities.

From the groups on the map, the "Caddoan" likely spoke (unsurprisingly) Caddoan, the Oneota and likely the Middle were Siouxan, and South Appalachian Muskogean. The other two its really tough to tell, for different reasons.

* - Yes, this is a smidge late for your "900" time-frame. However, the Vikings themselves actually didn't hit Greenland and N. America until about 1000.

Not the answer you're looking for? Browse other questions tagged native-americans north-america canada new-world or ask your own question.