How effective were the forces of the French Provisional Government compared to the other allies?

How effective were the French fighting forces after the creation of the Provisional Government of the Fourth French Republic on June 3rd 1944? Ways to answer this:

There is a Wikipedia article which gives an outline of some of the milestones in the evolution of the French military throughout World War II which provides a useful historical context for the development of the French Army as it existed in the post-Liberation period in question.

Corps Expéditionnaire Français (CEF)
A useful starting point in answering this specific question is to understand the reformation of the French Army which occurred on 1 August 1943, after the liberation of French North Africa, when the Free French Forces merged with the Army of Africa to form the new French Expeditionary Corps (Corps Expéditionnaire Français, CEF), under General Alphonse Juin. Juin was regarded as a very capable leader and the CEF performed very creditably during the Italian Campaign. By April 1944, the CEF was composed of 112,000 soldiers, including 60% Maghrebis (mostly Moroccans) and 40% French (mostly Pieds-Noirs).

The American General Mark Clark paid tribute to the French forces under his command in Italy in a letter to the French commander where he stated:

For me, it has been a deep source of satisfaction to see how the vital part played by the French troops of the Fifth Army throughout our Italian campaign against the common enemy has been universally acknowledged. During these long months, I have had the real privilege of seeing for myself the evidence of the outstanding calibre of the French soldiers, heirs of the noblest traditions of the French Army. Nevertheless, not satisfied with this, you and all your people have added a new epic chapter to the history of France; you have gladdened the hearts of your compatriots, giving them comfort and hope as they languish under the heavy and humiliating yoke of a hated invader. The energy and utter disregard for danger consistently shown by all members of the C.E.F., along with the outstanding professional skills of the French army officer, have aroused admiration in your Allies and fear in the enemy. From the banks of the Garigliano where your first successes set the tone which was to characterize the whole offensive, then pushing on to Rome through the mountains, crossing the Tiber and pursuing the enemy relentlessly to Sienna and to the hills dominating the valley of the Arno, France’s soldiers have always accomplished everything that was possible and sometimes even that which was not...With my deepest gratitude for the tremendous contribution that you have made to our joint victories, my dear General.

Forces of the Gouvernement Provisoire de la République Française (GPRF)
For their participation in Operation DRAGOON, the invasion of Southern France in August 1944, the French forces were formed into French Army B, under command of General Jean de Lattre de Tassigny, which on 25 September 1944 was redesignated as French First Army. By this time the French Army consisted of 560,000 regular soldiers and 300,000 irregulars of the French Forces of the Interior (FFI), former resistance fighters who had been brought under formal military command after the Normandy invasion. The FFI had numbered just 100,000 in June and had rapidly grown to over 400,000 by October 1944 when it was amalgamated into the regular French Army, creating a force of 1 million men by the end of 1944. By the end of the war in Europe (May 1945), French forces comprised 1,250,000, including seven infantry and three armoured divisions fighting in Germany.

The rapid expansion of the French forces after liberation, and the political difficulties resulting from the need to amalgamate large numbers of irregulars had a profound impact on the performance of the French Army in the field. The Wikipedia article describing French involvement in the Battle of the Colmar Pocket in the winter of 1944-45 outlines some of the difficulties:

On the part of the French, their replacement system was limited by the amount of training infrastructure they had been able to re-establish since reentering France in August 1944 and was further strained by a controversial French decision to "whiten" the French forces in Alsace by sending experienced Senegalese and other colonial troops — exhausted from fighting in Italy — to the south and replacing them with French Forces of the Interior (FFI) troops of varying quality and experience. While the FFI troops were capable of defensive operations, they had to undergo a steep learning curve in order to become effective at offensive operations, particularly where complex activities such as combined-arms operations were concerned.

Thus, at the close of November 1944, the French First Army deployed two kinds of units—highly experienced colonial units and "green" units that had recently received a large influx of FFI troops. Coupled with a supporting arms structure (artillery, engineers, etc.) that was weaker than that of other Allied field armies, the sag in French First Army troop proficiency allowed the Germans to hold the Colmar Pocket against an unsuccessful French offensive from 15–22 December 1944. 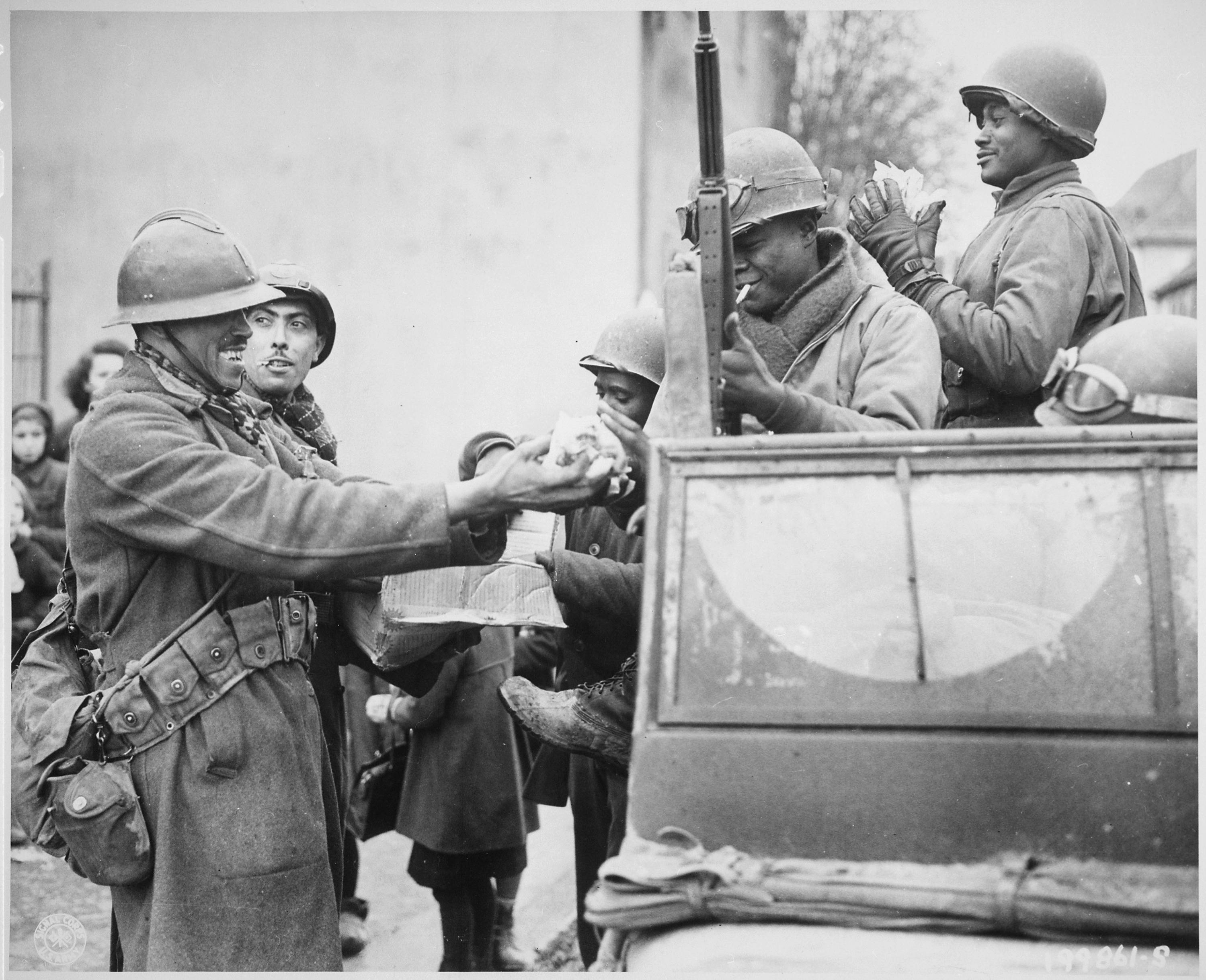 So, the French Provisional Government existed only for two years, you might be referring to "Free France" led by Charles De Gaulle.

They mainly fought in north Africa and were quite capable but matched against a legend of his time, Rommel. After Operation Torch (wikipedia link) this government got a large chunk of territory and manpower. Thus, able to help the allies more effectively.

They helped the U.K. in liberating german/italian holdings in Africa and in Middle-East, but they weren't that good. During the Italian Campaign (Wikipedia link) they fared much better and were actually praised by their general (an U.S. one, and others wikipedia link). During the liberation of France, they did really well in helping and securing cities, they ultimately were the one to liberate Paris (partially because they feared it would be destroyed, they attacked without reinforcements before the Allied sent help. Source on the first link I provided) " and by the end of the war in Europe, they were 1,300,000 strong – the fourth-largest Allied army in Europe ".

They weren't "feared" by the Germans, especially because the army was mainly made of north-africans (and the nazi ideology stated those people were clearly inferior.), but they often had people behind them, after all they were trying to liberate their country, one can guess it was somehow easy to gather support.

The British and Americans seemed to ponder their tactical value quite high (pincer attacks were more feasible etc etc) but for martial feats, it all depended on the situation. Some times (Italian conquest, liberation of France) they were useful and helped a lot, other times (Syria, East African) much less so. (De Gaulle thought much more people would rise to help, the soldiers garrisoned there didn't do as he expected etc etc)

On the other hand, French officials in Free France thought highly of it's army, that was able to fight back and wash a bit of the shame that was losing the mainland. Vichy France badmouthed them in order to prevent uprising and appease the other Axis powers (that really didn't want to see an uprising when they were busy elsewhere.).

Lastly, on the Eastern Front, they received multiple awards from the Soviets, even Stalin granted them a special name.

EDIT : I misunderstood what you were looking for, so I'll talk a bit more about what happened after the Liberation.

The French Army (which already became quite important before the Liberation) became well supplied (thanks to America), well marshaled and well equipped. General Leclerc used a bit of that new army to fulfill his oath (Wikipedia Link) and liberate Strasbourg. They did quite well there and were swift. Soon after that, a counter-attack happened! Only France and the U.S. are attacked, ferocious blows are dealt but ultimately the French army simply protected Strasbourg while the main battle has been done by the U.S. army. (Wikipedia Link). Then, the invasion of Germany continued. The French army did quite well in the south, but once again, they weren't fighting the most important battles. So they weren't a laughingstock anymore for the germans, they were simply another nuisance. It seems they were useful in preventing allies to be hit back, but I do not find any more distinction on the western front. (Wiki Link)

About the factors for combat effectiveness:

One of the major features of Free France forces, compared to American and British ones, was that they were able to fight in mountains. This is true for a great part of them, mostly coming from North African territories with local as well as metropolitan soldiers.

This ability was of great use in North Africa and in Italy.

Another special fact about these forces is that they included, for a part, veterans of the French campaign, officers with a professionnal military background, but as American divisions they had time to train and recent hardware. This combination of abilities made them quite effective. But you should note that it applies only for a part of Free France's forces. The better case is the 2nd Armoured Division.

The effectiveness in mountain was outstanding, according to French officers like General Juin, as well as Allied officers. The main example is the Battle of Cassino, but you could cite as well Tunisia or Corsica.

The combat effectiveness of the 2nd Armoured division was very good, and it often managed to get victory where it was not expected:

And for the Free French 1rst Army:

Not the answer you're looking for? Browse other questions tagged world-war-two france or ask your own question.

5
How was Australia able to start to demobilize in 1944?
79
Why didn't France and the UK invade Germany in September 1939?
25
How many lives were estimated to have been saved by the Hiroshima and Nagasaki bombs?
21
Why were the Germans and Russians so fixated on an unlikely "separate peace" in 1945?
5
How Effective Were German SS Units Compared to Non-SS Heer Units?
21
Why did the German air force lose experienced pilots faster than the Allies, even though they were defending their home airspace?
4
How important was the Suez Canal to the Allies during WWII?