Reading up on Churchill on Wikipedia, I found reports on a discussion inside the British cabinet whether to ask for peace following the Fall of France (see https://en.wikipedia.org/wiki/May_1940_War_Cabinet_Crisis). It seems that initially there was a majority for that, and that it took significant effort by Churchill to sway his ministers.

One argument put forth by Churchill was that any condition Hitler would ask for then would be so onerous, that fighting and loosing the war wouldn't be much worse. Moreover, the plan was not to approach Hitler directly, but to make first contact with Mussolini.

Now, none of Hitler's fundamental war goals directly impacted the British Empire. He fought them because they wouldn't let him take other peoples land, not because he wanted to take their land. In fact, he could even have given some stuff back he had already conquered (say Norway) in a peace treaty.

So, did the British government consider accepting the annexation of Poland as such a near-worst scenario? Or did they view Hitler's goals much differently from my own reading, and if so, who is right?

You have the timing wrong. When the events described occurred France not only had not yet fallen, but only the small portion of France north of the Somme and Aisne rivers was in German possession; less than the Germans occupied throughout the First World War. The evacuation of Dunkirk had just begun and would continue for another 6 days, eventually evacuating 340,000 British and allied troops. Paris has not yet fallen, and the stalwart M. Reynaud is still French Premier.

Here is the timeline: 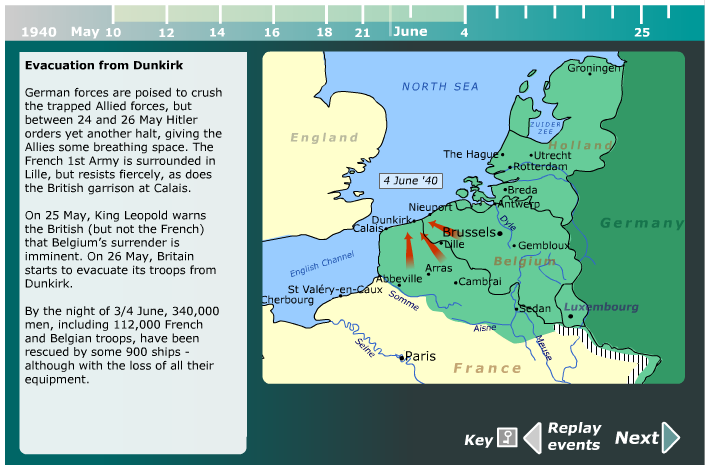 The most relevant quote I believe is the following from Churchill (Their Finest Hour):

There occurred a demonstration which considered the character of the gathering – twenty-five experienced politicians and Parliament men, who represented all the different points of view, whether right or wrong, before the war – surprised me. Quite a number seemed to jump up from the table and come running to my chair, shouting and patting me on the back. There is no doubt that had I at this juncture faltered at all in the leading of the nation I should have been hurled out of office. I was sure that every Minister was ready to be killed quite soon, and have all his family and possessions destroyed, rather than give in. In this they represented the House of Commons and almost all the people. It fell to me in these coming days and months to express their sentiments on suitable occasions. This I was able to do because they were mine also. There was a white glow, overpowering, sublime, which ran though our Island from end to end.

Far from it being a difficult task to rally (unanimous!) support of the Outer Cabinet for stout resistance, Churchill expresses pleasant surprise at the enthusiasm of the unanimous support received.

So while there remained War Cabinet ministers who still harboured doubts on the wisdom of stout resistance (Chamberlain and Halifax most notably), there seems to have been no such members of the Outer Cabinet.

Update re claim that M. Reynaud's statement "We are defeated" refers to France, in the war as opposed to French armies defending the Meuse River line."

As described in Their Finest Hour, Chapter 2: The Battle of France, Churchill and Ismay personally delivered to Reynaud and Daladier, in the wee hours of the morning of May 17, word that their request for an additional 10 RAF fighter squadrons in France was approved.

Daladier never spoke a word. He rose slowly from his chair and wrung my hand.

Note the common belief by German generals that the delays (of perhaps 48 hours) surrounding the appointment of Weygand were the most critical of the entire campaign, when their forces were most vulnerable to the counter-attack that Weygand attempted to orchestrate upon taking command.

I think Pieter's interpretation of events is correct. You can read a lot more about the context for what was being discussed in May 1940 in the Cabinet Papers and related documents (series CAB 65-68 & CAB 195), many of which are now available as PDF downloads from the UK National archives.

As for the wider context, I think your question can be rephrased along theses lines: "Was reaching an accommodation with Hitler's Germany, based on mutual recognition of interests possible at that stage, as an alternative to fighting a war?".

Such an approach had been called appeasement and that was precisely the previous British (and French) policy, culminating in the Munich Agreement of 1938. What transpired soon after was that Hitler broke the agreement, although previously he had declared himself perfectly satisfied in all his demands.

In other words, it was impossible to make a gentlemen's agreement with one who was manifestly not a gentleman.

Some, like Churchill, knew this all along. Others, like Chamberlain, needed the Munich fiasco to drive the point home, but by May 1940 nobody trusted Hitler.

Britain kept on fighting because of its geostrategic interest. They refused to accept a world where Britain would be at best a junior partner of Germany, a satellite country in the worst and not that unlikely scenario. Every nation wants to be independent, the question is how much they are willing to pay for it and what loosing independence mean. UK lost 450,900 people, 0.94% of its population. Was it worth it? Perhaps.

Of course in the end they end up being the junior partner of USA, but there is a huge difference between National Socialist Germany and free market USA.

29
Did Churchill and Roosevelt know about the Molotov-Ribbentrop Pact, or the following secret pacts between Nazi Germany and the Soviet Union?
80
Why didn't France and the UK invade Germany in September 1939?
19
Have Germany and Poland ever signed a peace treaty after WWII?
15
I'm reading The Rise and Fall of the Third Reich. What should I watch out for?
31
Was a passport needed to travel between UK and France in 1972?
12
What oath did medical students take in Nazi Germany between 1933 and 1945?
10
What was the timetable for Germany's Invasion of the Low Countries (Fall Gelb) in WW2?
9
How was the border between Vichy and German Occupied France decided?
7
Did the Germans consider an amphibious landing for Fall Blau?