Would there have been racially mixed student bodies in schools in communist Bulgaria?

For example, would a high schooler in Bulgaria in the 80s had the occasion to go to school with Arabs or Africans... either exchange students, immigrants, children of diplomats, etc?

I'm assuming yes and that this is a dumb question, but I have never seen these groups represented as being a part of the society.

I'm asking because I am writing a ficticious story and trying to determine if my settings/characters ring true or if I should change something...

In the 1980's Bulgaria was nominally Communist to appease the neighboring USSR, but was effectively an autocracy. This made them one of the most unfree societies in the world, and drastically suppressed their economic opportunities as well. So it is tough to imagine why anyone with no family ties there would have wanted to immigrate.

However, there were ethnic minorities there. In fact, a large part of what eventually brought down the Communist State was a nasty crackdown on the Turkish minority that sent a third of a million of them fleeing the country. Today the country is ethnically roughly 10% Turkish, and roughly 5% Roma. However, both communities at the time were suffering under forced assimiliation policies, which included things like banning use of their languages. So if a Bulgarian did happen to have a Turkish or Roma classmate, its highly unlikely they had a chance to use the experience to learn much about another culture.

The Turkish minority in Bulgaria is homegrown, they are not immigrants. I think they are not perceived as "foreign" or "racially distinct".

Most cultural exchange with people from foreign countries happened with the socialist brother states (Russia, Cuba, Angola etc.), but this would be mostly on university level or other high skilled jobs. (e.g. There is a documentary on the Belene power plant which features a guy from Cuba who decided to stay after the communist regime collapsed)

I am more familiar with the Romanian situation, but African and Middle East countries with "Marxist" orientation used to sent engineers to follow specialization courses and students to study in communist Europe. This was part of an effort to avoid dependence upon the former masters of Western Europe during the process of post-colonial modernization. The visiting 'specialists' had no time to integrate the local society, as they stayed for months, weeks or even days. Students stayed for longer periods (years).

On the whole, in spite of the official discourse about socialist friendship, theses states were focused on maximizing control over their citizens, and change of residence or citizenship between socialists countries was totally discouraged.

I know of students of Syria, Iraq, Algeria, Libya and Tunisia studying in Romania in fields like engineering (especially in oil production) and medicine — and, more surprisingly, even of an Ethiopian studying theology in Bucharest in the 1960s!

Students were coming for specific universities. I'm not familiar with Bulgarian universities. In Romania, the oil industry and medicine were the most sought-after. In Bulgaria it might have been shipping or some other industry.

Here is a map of the "socialist-leaning" states. (The presence of Portugal there is odd. The closer the geographical vicinity of a country, the greater the chance of having students from there). 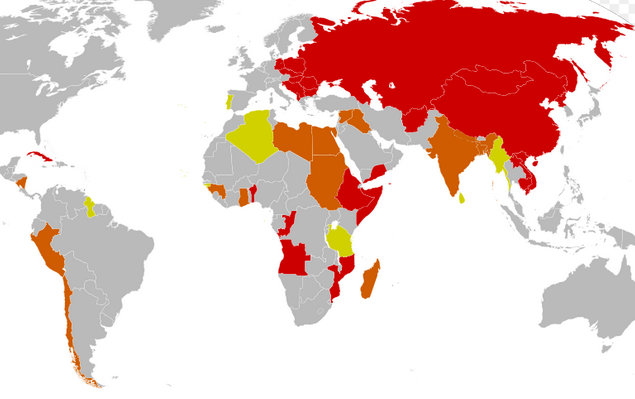 But: all these were people coming for their university studies, not people living there, with high school children. Among these students, there were no Iranians I guess, in Bulgaria. (Before the Islamic revolution, the Persian regime was anti-communist. Ceausescu's Romania had at some point good relations with the Islamic republic: but that was exceptional and short, and sending students to an atheist country was improbable.)

Diplomats' children were not normally studying in local schools, but in special ones.

There were some communists from Greece emigrating to some countries (Bulgaria, Yugoslavia, Romania) after the military crackdown against communists there.

Again from my Romanian experience: there were some cases of male students from the aforementioned countries that had children with local women (usually colleagues). Most of these children never left. Maybe this situation could fit the OP's story.

I know from my parents, that there were many Vietnamese students and some students from different African countries in the Bulgarian universities.

Some of them even stayed in the country after they finished their studies.

Additionally, there were kind of student- and science exchange programmes, in which students had the chance to go and study in universities of countries of the socialist world. I know of people, who went to Czechoslovakia, Poland, and USSR.

In fact, some still-active Bulgarian politicians have actually finished some studies in political or other academies in the USSR. A prominent example is the current President of the Party of European Socialists, Sergei Stanishev.

According to my parents (but please don't take it as given), mostly children of proven communists or students with proven socialistic views were allowed to participate in such programmes. But for sure, you had to get an approval from the university's party secretary, before you apply for the programmes.

Children of diplomats often go to embassy schools that are completely separate from local schools. See e.g. the history of German schools in Moscow here.

Like other Eastern European countries, Bulgaria seems to have had Vietnamese workers in the 1980s (HT to komita). I do not know about the situation in Bulgaria, but in East Germany the rule was that these workers were not supposed to have children and this was enforced quite strictly.

There actually were some dozen or so.political (communist) emigrants from Iran in East Germany. E.g. Bozorg Alavi or the mother of Yadegar Asisi. This article makes it appear as if Yadegar Asisi's childhood was very much like the childhood of local kids (the images of East Germany's worker militia further down the article are unrelated)

My personal guess would be that there was no such emigration of Iranians to Bulgaria, but this is really just guessing.

Bulgaria is an ethnically whole country. An exception are the Turkish and Gypsy minorities who came to Bulgarian lands from Asia during the medieval Turkish Islamic invasion of Europe. There has never been an Arab, Kurdish or African minority in Bulgaria. During the socialist rule in Bulgaria from 1944 to 1989, people of other ethnicities and races were highly tolerated, people of Turkish origin were admitted without admission to the universities and then hired with a job advantage. There were thousands of Africans from Cuba, as well as thousands of Vietnamese workers working in Bulgaria.

8
How would one have gone about setting up a business during Communist Revolutionary China?