Why are there so few twins in political history?

In Joan Oates' book Babylon, particularly the part about Sargon and his successors,¹ it is said that Sargon's son Rimush was killed in a palace conspiracy, possibly with the participation of his brother Manishtushu. The author says that this name, meaning 'who is with him?', perhaps indicated that they were twins. This made me think about twins in general and how they seem pretty rare among prominent historical figures.

Some sources say that the likelihood of having twins is 3%, while others seem to indicate that the number might be 1% in non-developed countries. As there seems to be a lot of fluctuation, I will use 1% as the real chance. With this number, we should expect to find at least some twins in history, as there are more than 100 known historical figures. But this doesn't seem to be the case.

A quick Google and Wikipedia search didn't give me any results; I can't seem to find historical political figures with twins, even non-famous twins — unless I include mythological twins in my search; in this case, there are the pairs Romulus and Remus, and Apollo and Artemis. As I am interested in people that really existed, though, these pairs don't answer my question. Also, as I don't want this question closed, I will divide it into two sub-questions — the first, a straightforward one; the second, a question that might generate some debate, which is not the objective here (if this is considered a violation of this website's rules, feel free to edit out the second question):

1) Can someone remember any historical figure with a twin, besides Rimush and Manishtushu (on which there still seems to be an ongoing debate)?

2) Why is this the case, why are twins so rare among historical political figures?

As @BigDataLouis mentions in an answer he has deleted, Elvis Presley had an identical twin brother, delivered stillborn. You can find many more in the List of twins and Twins in mythology.

Presley case sheds some light on why this is rare: twins (and, in general, multiple fetuses) compete for mother's resources in the womb and, on average, have lower birth weight. After birth they face more competition for parental support. Thus, ceteris paribus, they are less likely to grow up strong or develop their talents as much as single births.

Those who are "born into fame" (e.g., royalty) face a different issue: an identical twin of a first born prince would be a threat to the peaceful succession (cf. the legend that The Man in the Iron Mask was Louis XIV's identical twin) and could even be murdered at birth.

Perhaps the best known ancient or medieval twin is the Roman emperor Commodus, and there were also some notable parents of twins: the Roman dictator Sulla, the Roman emperor Marcus Aurelius (father of Commodus), and William Shakespeare, among others.

As to why there are so few, complications at birth in times of limited medical technology is the most clearly attested reason. Also, twins are often born smaller and weaker, lessening their chance of survival in times when infant mortality was already high, and there was most likely infanticide in some cultures / times periods.

DETAILS ON HISTORICAL FIGURES WITH TWINS

There are a few omissions from the Wikipedia list.

The Roman dictator Lucius Cornelius Sulla (138 BC to 78 BC) and his fourth wife Caecilia Metella (died circa. 80 BC) had twins who both survived into adulthood; the senator Faustus Cornelius Sulla and his sister Fausta Cornelia, wife of the poet Gaius Memmius and later of Titus Annius Milo, political agitator and friend of Cicero.

The Roman emperor Marcus Aurelius and his wife Faustina the Younger had two sets of twins. Most famous among them was Commodus (born 31st August 161, died 31st December 192 AD). His elder twin brother, Titus Aurelius Fulvus Antoninus, died at the age of four. This double arrival was evidently viewed positively for

The astrologers cast favourable horoscopes for both of them. The event was appropriately celebrated on the imperial coinage. 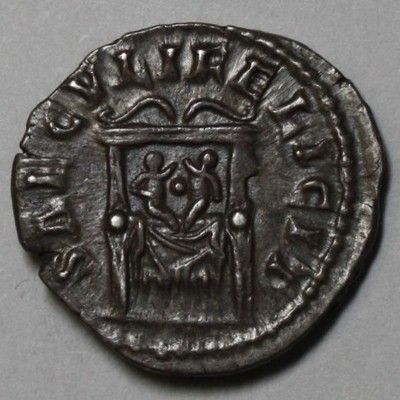 Despite the astrologers and their horoscopes, the elder twin died in 165 AD. Some 12 years earlier, Marcus Aurelius and Faustina the Younger had had another set of twins (Titus Aelius Antoninus and Titus Aelius Aurelius) in 149 AD, but neither survived long. The twins were

commemorated on the coinage of the year, with, on the reverse, crossed cornucopiae surmounted by busts of two small boys, and the legend temporum felicitas, ‘the happiness of the times’. But first one of the infants died, then the second, both before the end of 149.

Their twin sons, Waleran, Earl of Worcester (1104-66) and Robert de Beaumont, Earl of Leicester (1104-68) were wards of Henry I (they were present at his deathbed) and later became powerful barons. Waleran was a leading supporter and son-in-law of King Stephen. Robert was less enthusiastic in his support of Stephen and, unlike his brother, prospered under Stephen's successor Henry II, holding the offices of Chief Justiciar of England and Lord High Steward until his death.

HENRY II of Castile (born 13th January 1334, died 29th May 1379) had a younger twin brother, Fadrique Alfonso, Lord of Haro (died 29 May 1358). They were the illegitimate sons of Alfonso XI of Castile with his mistress Eleanor de Guzmán. When their father died, he was succeeded by the twins' half brother Peter of Castile (known both as 'the cruel' and 'the just'). After the twins' mother was executed, they rebelled and were reconciled with Peter several times. Then, in 1358, Fadrique was apparently lured to his death by Peter. Henry continued to rebel (it gets complicated) until, in 1369, he personally killed his half-brother Peter after having defeated him at the Battle of Montiel.

Some Shakespearean scholars speculate on the relationship between Hamnet and his father's later play Hamlet...

Lastly, although not politically important, the case of the 10th century cojoined twins in Byzantium is worth mentioning, not least for the attitudes of chroniclers at the time (and for the first known attempted surgical operation to separate cojopined twins). The Byzantine historian Leo the Deacon provided this "firsthand observation of seeing the conjoined twins, sometime during the mid-940s":

At this time male twins, who came from the region of Cappadocia, were wandering through many parts of the Roman Empire; I myself, who am writing these lines, have often seen them in Asia, a monstrous and novel wonder. For the various parts of their bodies were whole and complete, but their sides were attached from the armpit to the hip, uniting their bodies and combining them into one.... They were thirty years old and well developed physically, appearing youthful and vigorous.... and they had indescribably sweet and good dispositions. 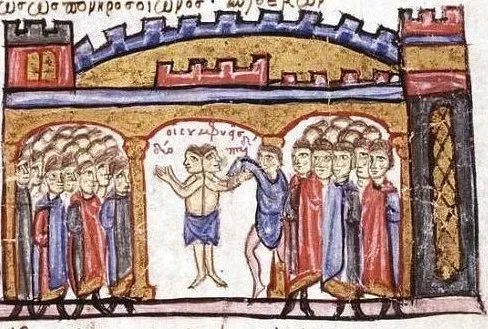 Illustration from 'The Synopsis of Histories' by John Scylitzes. Image source.

The 11th century historical writings Theophanes Continuatus has this:

...they resided for a long time in the City [Constantinople] and were admired by everybody as a curiosity but later were exiled because it was believed that they were a bad omen.

The attempt at separation was made when one of the twins died but, unfortunately, the second twin died three days after the operation.

WHY ARE TWINS SO RARE AMONG HISTORICAL FIGURES?

It is difficult to establish just how rare such births were as we simply don't have any statistics but it is fair to say that, prior to the advent of modern medicine, few such births were successful. The earliest evidence we have of twins dates back to the middle Holocene period, concerning the remains of a woman with twins in her womb believed to be 7,630 and 7,725 years old. Examination of the evidence suggests that all three died because of complications which would have proved challenging even to modern doctors:

The location of the fetal remains suggests the first baby was breech — coming out feet first — a dangerous condition complicated by the presence of the twin.

While the first baby was partially delivered, at some point labour was obstructed, either by interlocked twins, head entrapment or some other condition such as the infant's arms beside or behind its head....

..."Without the skills, experience and technology of modern medical practitioners, this case of dystocia [obstructed labour] would have been a virtual death sentence for all three individuals," the researchers say. 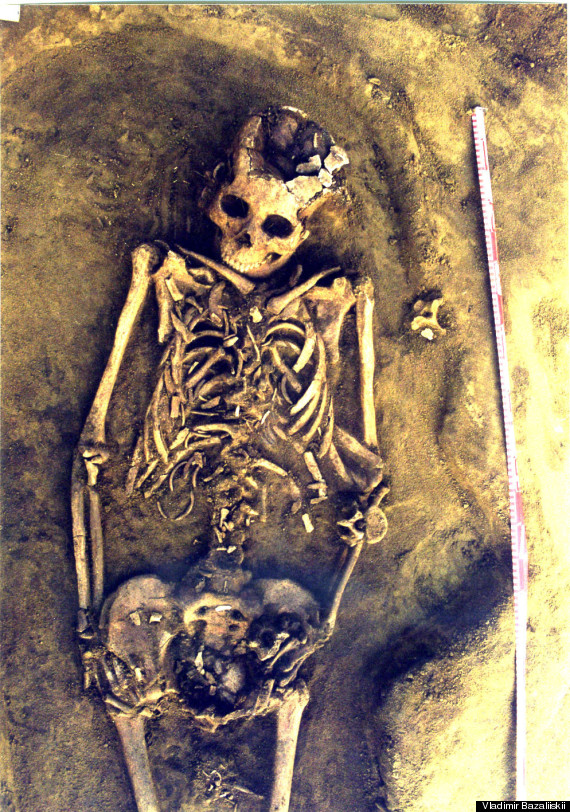 "...the oldest example of death by dystocia, or obstructed labor, and the earliest known example of twins on the archaeological record". Text & image source: 'Ancient Grave In Siberia Yields Earliest Example Of Twins'

Pliny the Elder noted that

when twins are born, it is rare for the mother or more than one baby to live.

According to Pliny, the mortality rate was especially high if one twin was male and the other female, with only a one-in-ten chance of both surviving.

While the Romans may have seen twins as a cause for celebration, medieval Europeans seem to have had mixed views with some regarding twins as being the result of adultery or as being unnatural, but at the same time they were also "revered...as people with special powers". One (anonymous) 14th century Hebrew writer classifies these births as 'difficult', as when

the foetus is dead, or when his head is very big, or when he has two heads, or when there are / twins, or when the birth is unnatural, or when it occurs before time, or when the woman is very old, or as a result of the uterus’ diseases

The Trotula Manuscript, "the earliest obstetric work in Middle English" (15th century translation), in giving instructions to midwives on delivering twins, alludes to the high mortality rate when it says "the children brought to grief, as often happens."

Twins are more likely to be born prematurely, weigh less and be at more risk of childhood death than singleton babies, all of which can cause health problems later in life.

Given the already high infant mortality rates of even single births persisted into the 20th century, it is hardly surprising that few twins survived. Further, in ancient Japan, A. Piontelli notes that (with reference to infanticide)

twins were not welcome in ancient Japan. Their mothers were regarded as animal-like, as twins were associated with animal litters, and the twins spoiled their mothers' bodies and imposed financial hardship on the family.

If the incidence of twins in ancient Japan was roughly the same as just before the advent of fertility treatment (approx. 5.5 to 7 per 1000 births, compared about 10 per 1000 births in France, Germany and the UK), it is no surprise that few survived.

Their parents were Charlemagne and Hildegard of Vintzgau.

Not the answer you're looking for? Browse other questions tagged political-history famous-people or ask your own question.

9
What evidence is there that English Political divisions from the 1600s are replicated in American politics today?
8
What factors prevented the legality of secession being pursued via the courts prior to the outbreak of the Civil War?
8
What was the context of Queen Juliana's "I can't understand it" quote?
5
Were there attempts to rename the French language Prussian order Pour le Mérite, why was it never Germanised?
11
MLK used "negro" several times in his "I have a dream"-address. Could white "liberals" at the time also use "negro" as a neutral word for blacks?