Flag with 13 white stars and a crescent on red background 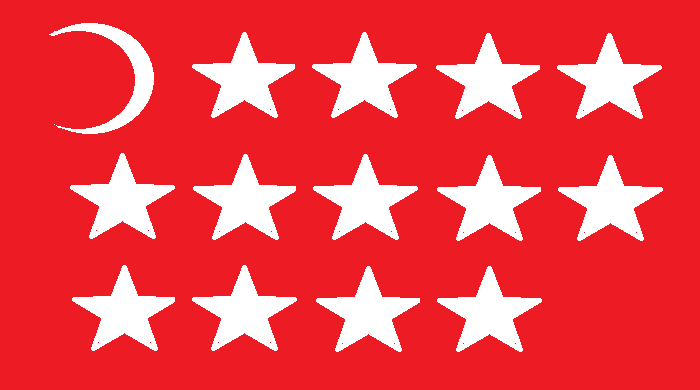 I saw this flag as a sticker on a car from another country. I could not recognize the plate so I do not know its nationality.

My search on Google/images resulted mostly in the Madrid flag... 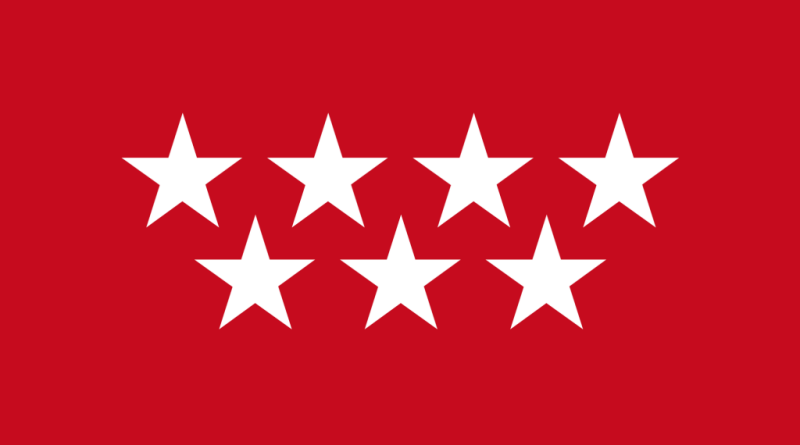 But those are certainly not correct. I write from Spain and I have never seen a variant of the Madrid flag such as this, neither official nor unofficial.

The image I offer is not a photo, but a "reconstruction" made by me with MS Paint, but I am pretty sure that it is faithful in colors and in the number of stars and their position.

(I edit to add some clues on the license plate)

I've been looking for Middle-Eastern and North-African plates, because of the crescent moon on the flag, and I'm quite sure this was not an Arabic plate. Plates in most Muslim countries usually include Arabic numerals and letters, like this one:

European plates usually consist of black numbers on a white background and "no frills". But this flag had a comparatively colorful background, green, blue, like a bank note. It's possible that it was a plate from the USA, like this one: 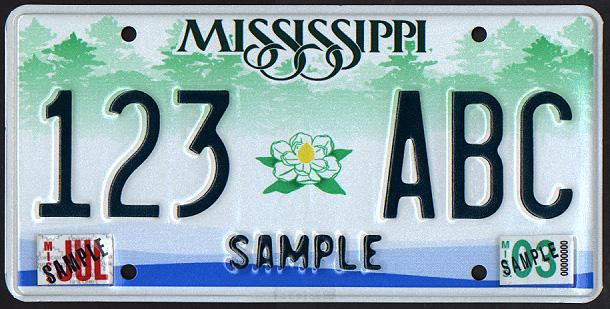 Important CAVEAT: I couldn't see any flower, nor the name of the state. I'm not saying that it was an American plate. But it had green, blue and white colors which made it look like a banknote.

It might be a Confederate flag, specifically the Van Dorn battle flag: 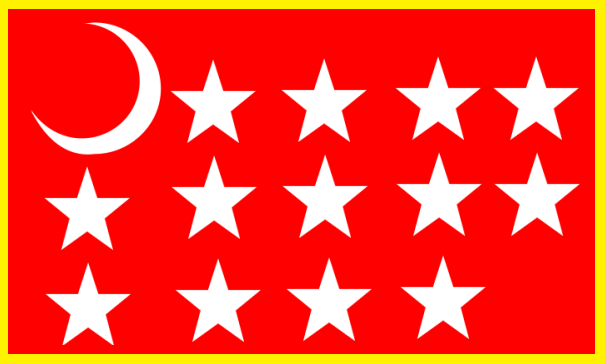 The Van Dorn battle flag is a historical Confederate flag with a red field depicting a white crescent moon in the canton and thirteen white stars; and trimmed with gold cord. In February, 1862, Confederate general Earl Van Dorn ordered that all units under his command use this flag as their regimental colors.The 4th Missouri and 15th Arkansas Infantry Regiments carried this flag into battle, as well as some of Van Dorn's old units in the Army of Mississippi and East Louisiana.

The thirteen stars in the Van Dorn battle flag reflect the thirteen states admitted to the Confederacy, including Kentucky and Missouri.

Not the answer you're looking for? Browse other questions tagged american-civil-war identification flags or ask your own question.

4
Epoch of an item marked with anchor symbol with the letters N and D
15
Why did Kabila discard the name and flag of Zaire?
18
Flag with dark border and light inner?
20
Strange Symbol Painted on Basement Floor
6
Flag of Paris: Why blue and red?
51
If the Union Jack joins the flag of England and Scotland, why does it have a different shade of blue than the Scottish flag?
10
Can anyone explain why the Scottish flag on this map from 1504 has a red cross on a white background?
8
What are these items in this 16th century plan of an English town?
3
Are the Swiss flag and the flag/coat of arms of Piedmont related?