What is the reason for the selections of gun caliber size in history?

After being a fan of diverse WW2-games, I was wondering why and how the gun caliber sizes were designed, from the view of history. Is there an explanation why for example the German army choose to step up from 50 mm via 75 mm to 88 mm, and not to 90 mm in caliber? Why did they choose that "uneven" (imho) gun diameter? Furthermore, the guns increase from 105 mm (reasonable) to 128 mm. Again: Why not an even value, such as 130 mm? Similar approaches can be done for the US tanks (76 mm for example, even though that is close to 3 inches).

Thus, is there a historical reason for such odd caliber sizes, or rather a physical reason?

The general answer to that is because the design goal is to make the best gun possible, not have the numbers come out neatly. The engineers designing and building the gun don't care if it's in neat numbers. They might start with one neat number, but derived dimensions are subservient to engineering considerations and calculations.

This is probably the most important reason why large caliber guns are the caliber they are: there's already tooling to produce the parts in that caliber, particularly the expensive rifled barrels. For example, the German 12.8 cm Pak 44 used tooling in common with the 12.7 cm SK C/34 naval gun used on German destroyers.

For small arms, small differences in ballistic performance are not terribly important; tactics dominate small arms engagements. Instead the problem is supplying large amounts to large numbers of troops who will use it for various tasks, and they have to carry it. Logistics becomes paramount. For this reason, most militaries, in contrast to civilians, have standardized around just a few small arms rounds. One pistol round (9x19mm or 9×18mm), one intermediate round (5.56x45mm NATO or 5.45×39mm Soviet), and one full power rifle round (7.62×51mm NATO or 7.62×54mmR).

Large caliber firearms tend to be specialized, vehicle mounted, and fire less ammunition. They fill the roles of anti-tank, anti-aircraft, and artillery. These fields were in an intense arms race, particularly during WWII until roughly the 1980s when electronics took over, so you could get an advantage out of fielding a new round that offset the logistical problems. As a result militaries can afford a lot of diversity in large calibers, but they still tend to cluster around certain historical calibers that they (or who they're buying from) are already producing.

Naval guns have been around for a long time, so tanks and artillery inherit the naming and size quirks of old naval guns.

For example, the famous German 88 began life as AA gun which itself began as a naval gun. The US 90mm also started as an AA gun (the 90mm M1 and M2) and was adapted into the M3 tank cannon for the M36 Tank Destroyer and M26 Pershing.

It's Just A Name

There are various ways to name a round. Wikipedia puts it this way.

Due to variations in naming conventions, and the whims of the cartridge manufacturers, bullet diameters can vary widely from the diameter implied by the name.

There are so many numbers to choose from! Have a look at 5.56x45mm NATO. 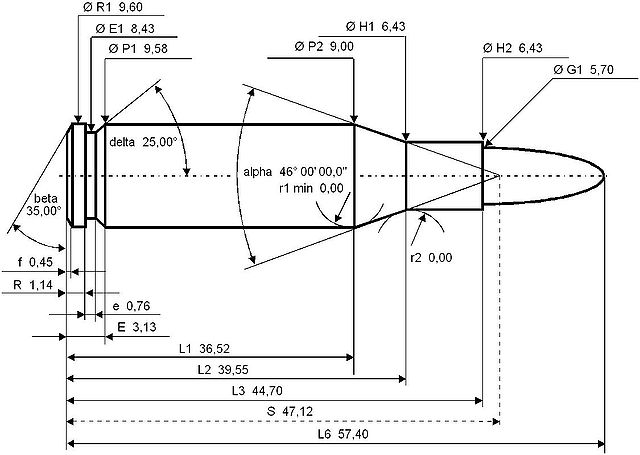 And you can just make shit up.

So the number in the name is just a name, divorced from the actual engineering specifications.

Sometimes odd metric designations are because they began life in another measurement. 12.7cm and 12.8cm are actually 5 inch guns. 76mm is 3 inches, etc...

Then there's the British "pound" system like the "3-pounder". This is how much round, solid shot would weigh and goes waaaaay back in British naval history. A 3-pound gun is 47mm which explains why we had 47mm weapons.

Volume Is The Square Of The Caliber

When you increase the caliber, and keep the length the same, the volume of the case increases by the square of the caliber. That means bigger shells (now you can store less shells), more weight (good luck humping that round, loader), and more material (higher cost per round).

The numbers get worse for the barrel. The 5"/38 is 5683mm long and weighs 1,810 kg. If we increase its surface area by 2.5% that's an extra 45 kg of high quality steel. That extra weight means a stronger mounting which means more weight which needs stronger drives to rotate it, etc.

Note that these are very back of the envelope calculations. Point is, even a small change in diameter can have a large effect.

Please keep in mind this is not a practical example of scaling up a round, I deliberately left the length the same and ignored a host of other issues because they're outside the scope of the question. It's only rough calculations intended to illustrate the knock-on effects of changing the caliber even by a few millimeters. And yes, as the caliber (radius) changes, but the length remains the same, the volume changes by the square of the caliber; that is not a mistake. If you want to edit it with more accurate calculations that don't clutter the answer, please do. If you want to talk about this more, please do it in chat.

Many caliber names trace back to the 1890s up to WWI when changes in gun and ammunition was happening fast, and nobody fussed too much about naming standards because they needed guns for the front NOW.

Others are simply their metric versions of older imperial standards.

Possibly from the British 25-pounder (not the Ordnance QF 25-pounder from the 1930s, but the caliber measurement). The 88 in German service is originally from the "quick firing" 8.8 cm SK L/30 naval gun dating back to 1892.

From French Canon de 75 modèle 1897. Adopted by the US to have commonality with French equipment in WWI.

I can trace this back to the 18th century Grasshopper. In modern times it began with the QF 3 pounder Nordenfelt and the Canon Hotchkiss à tir rapide de 47mm, quick-firing naval guns both designed in 1885.

The reason for selecting 45 mm caliber was the large reserves of the French 47 mm shells which can be converted to 45 mm by milling out the driving bands.

Earliest modern use I can find is the QF 1-pounder pom-pom 37mm autocannon from the late 1880s.

Earliest reference I can find is the French 25mm Hotchkiss anti-tank gun proposed in 1926 to replace the 37mm infantry gun with better armor piercing capability. The Japanese used a local variant as the Type 96 25 mm AT/AA Gun.

"Interior ballistics," the art of getting projectiles to come out of gun barrels spinning correctly, at the desired speed, and without unexplained wobbles, is complex. As recently as the 1980s, FN Herstal, who are a pretty competent arms company, were unable to make their planned 15mm calibre FN-BRG machine gun work in a satisfactory way, and had to switch to 15.5mm calibre. Naturally, this sort of problem was more common in the nineteenth and early twentieth centuries. And round numbers don't actually provide any engineering advantage.

Once a calibre has gone into use, there are many advantages from sticking with it. Having as few sizes of ammunition as possible is very helpful for wartime logistics. Guns can be improved by upgrading the ammunition. Better ammunition can be used in new guns. And even if you need a gun with quite different characteristics, there's often production plant that can be re-used more easily if it's for the same calibre.

So there was a substantial random element in the initial selection of calibres, and once a calibre is widely used, there are few advantages and major disadvantages in changing to another one for the same kind of work.

Indeed, as others have already said. 76.2mm is equal to 3", while 127mm is equal to 5".
Old naval cannons (XIX century) were not described by its size, but by their weight, so usually a cannon was described as a 300 pounds, 250 pounds, 25 pounds, 17 pounds. As result the cannon was designed to fit a bullet weight.
That's why old cannons defined the ammunition, and the ammunition forced the size of future barrels.

I want to add another issue to the previous answers, the relation of volume to diameter.

Often old tanks were upgunned with larger guns rather than introducing new tank guns together with new tanks (see the KwK 40 on the Panzer IV). Old tank turrets got crowded, and finding room for larger guns and larger ammo was difficult. Sure, we're talking about just five percent, but that adds up.

8
What is the history of standing armies in India?
13
In which situation is the broadside more preferable than every gun firing on their own time?
12
What was the size of the Chola Empire's navy under Raja Raja Chola I?
4
How effective were siege guns and gun boats compared to field artillery in the 19th century?
8
Origin/reason for reversed flag on right shoulder?
0
What is the history of organizing militaries primarily through semi-permanent units as opposed to individual positions?
10
How did the British Army unit size and structure in WWI change from 1915 to 1918?
25
What is the reason for: "Risk taking must focus on winning rather than preventing defeat" in US Army Operations guides?
1
Are there any tanks with the gun and autoloader outside the main turret?